Manager Brendan Rodgers is sweating over a striking crisis after his French striker limped out of last night’s 3-0 win over Motherwell in the first half.

With Leigh Griffiths on the sidelines due to personal issues, Edouard is the only recognised striker in the squad.

And the Hoops face Rangers in the Old Firm on December 29.

Rodgers said: “He just felt a tightness round his abductor, so we’ll assess that in the next 24 hours.

“It’s been unfortunate for Odsonne because he’s had to play a lot more games than I’d have wanted him to because he’s been the only real striker.

“When you lose any player it’s a concern, but he’s played a lot of games and we’ve not been able to rest him, so it’s probably a little bit of fatigue.”

Edouard’s injury was the only blemish on an evening when the champions returned to the top of the table.

Scott Sinclair’s penalty came between strikes from youngsters Anthony Ralston and Mikey Johnston and Rodgers was full of praise for the way his kids did the business.

He said: “He [Ralston] was great after getting back to the level of playing and training he was at a year or so ago.

“His goal was a fantastic finish and young Mikey got his goal to finish off a really good move of quick passing and combinations.

“It was great for those young boys who have trained with us a lot to make their contributions, which will help their careers here.

“It was a good night’s work as we played very well, particularly in the first half.”

Celtic boss Rodgers presented Scott Brown with a jersey pre-match to commemorate his 500th appearance and said: “To play that number of games for a club like this here with the pressure is fantastic.”

Well boss Stephen Robinson added: “It was frustrating but we weren’t brave enough on the ball until Allan Campbell came on. We got done by errors for the first two, while the third was a great finish.” 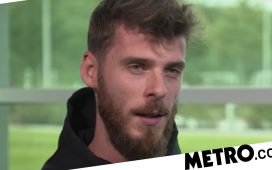 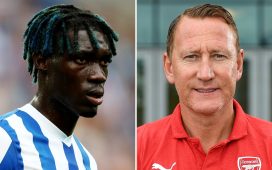