Riot police clashed with pro-independence Catalan protesters in Barcelona on Thursday while other activists burned tyres and tried to block highways across northeast Spain as part of a day of protests against the trial of 12 separatist leaders.

Near the Plaza Catalonia railway station in downtown Barcelona, police in riot gear used batons against a large group of mostly young protesters after some of them hurled stones at the police. No arrests or injuries were reported.

Activists blocked roads and rail lines in Catalonia on Thursday as a region-wide strike began against the trial of separatist leaders for their role in a failed 2017 secession attempt.

Called by a small pro-independence union, Intersindical CSC, but without the backing of larger unions, the one-day strike was not widely followed in the northeastern region although it generated several protests. 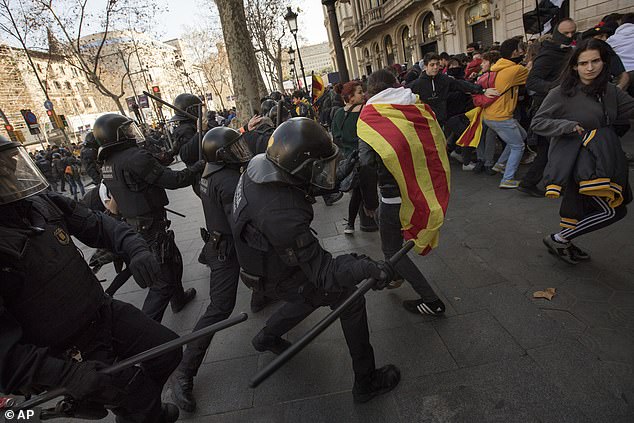 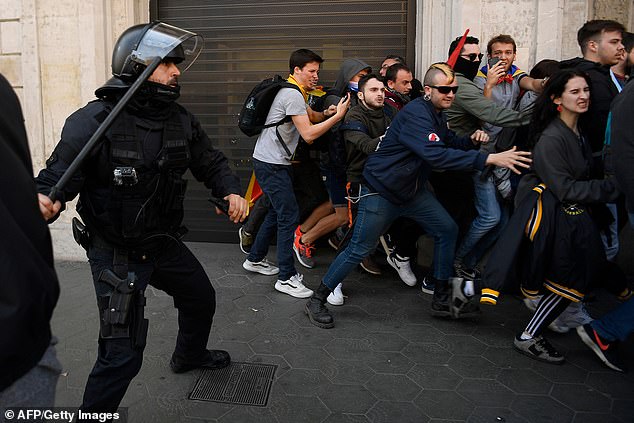 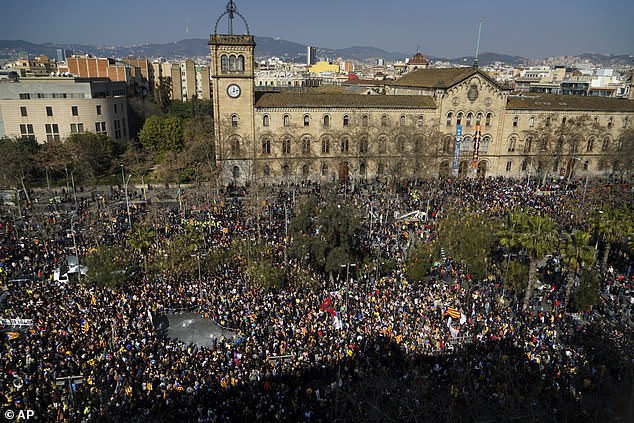 Demonstrators marching in central Barcelona, during a strike calling for Catalonia’s secession from Spain by blocking major highways, train lines and roads across the region

Public transport in Barcelona was slower than usual but most shops remained open.

Traffic authorities in Catalonia said activists cut off around 20 roads, including the A7 highway that links Spain to France, the A2 between Madrid and Barcelona and the main entry points to the Mediterranean city.

Activists also briefly blocked train traffic by occupying the tracks at a station in Barcelona and in other parts of the region, according to the company that manages Spain’s rail network.

At midday, hundreds protested in the central University Square, where the city’s oldest university stands, and another demonstration is planned for the evening.

‘We’re here in solidarity with those who are victims of a trial that just doesn’t hold water,’ said Jaume Sole, a 45-year-old engineer.

The Catalan employers’ association has denounced the work stoppage as politically motivated.

Separatist parties and associations are backing it. 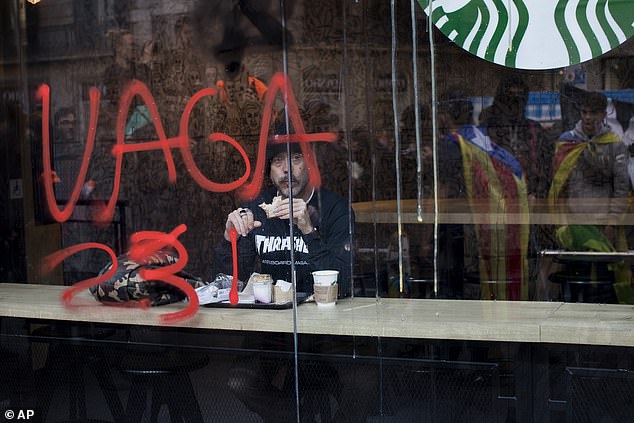 A man eats inside a coffeeshop with a glass painted with a graffiti reading in Catalan: ‘strike’ 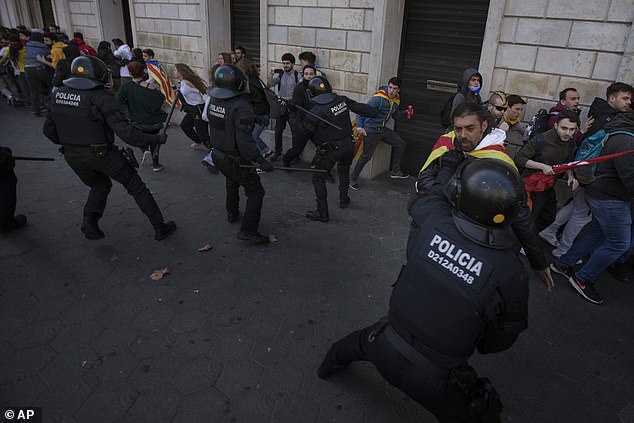 Despite the apparent aggression used against the demonstrators, no injuries were reported 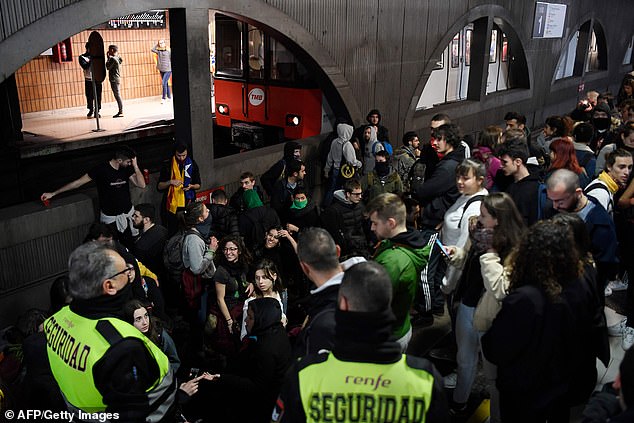 They began mobilising last week in solidarity with the Catalan separatist leaders on trial for pushing a secession referendum in October 2017 in defiance of a court ban, and a subsequent short-lived declaration of independence.

On Saturday, around 200,000 people including regional president Quim Torra protested in central Barcelona, police said, behind a banner that read ‘self-determination is not a crime.’

Torra’s separatist executive has expressed solidarity with the strike and cancelled all official events planned for Thursday.

The trial of the Catalan separatists started on February 12 under intense domestic and foreign scrutiny.

It was due to last three months but the court on Wednesday sped up the process to try and finish the trial before snap general elections on April 28. 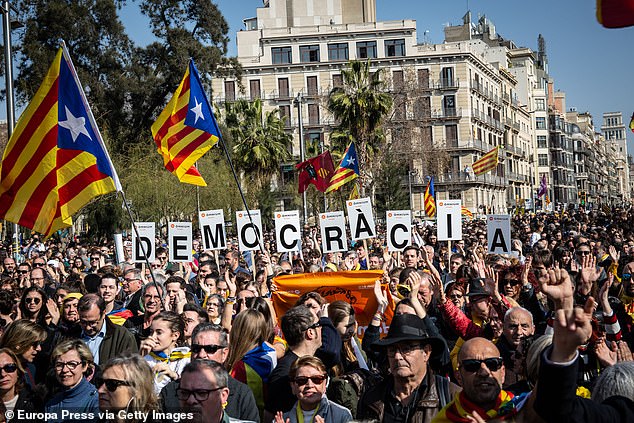 A mass student demonstration in University Square, Barcelona during the strike in Catalonia against the trial of 12 pro-independence leaders 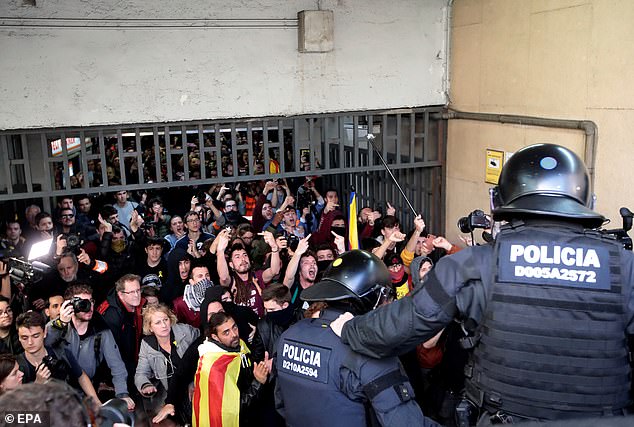 Catalonia’s former president Carles Puigdemont, who fled to Belgium soon after the declaration of independence on October 27, 2017, is not among the defendants as Spain doesn’t judge people in absentia for major offences.

So far, those on trial have defended the peaceful nature of the secession movement.

They have justified holding the referendum on a democratic mandate they say they got from voters in Catalonia who handed separatist parties a majority in 2015 polls.

This prompted unusually outspoken comments from King Felipe VI on Wednesday who said it was ‘unacceptable to appeal to a so-called democracy that is above the law.’

Defendants have also said the proclamation of independence was a mere political declaration without legal effect.

On Thursday, Santi Vila, a regional government member at the time, said the referendum was actually ‘a big political mobilisation’ rather than a plebiscite given the Constitutional Court had banned it. 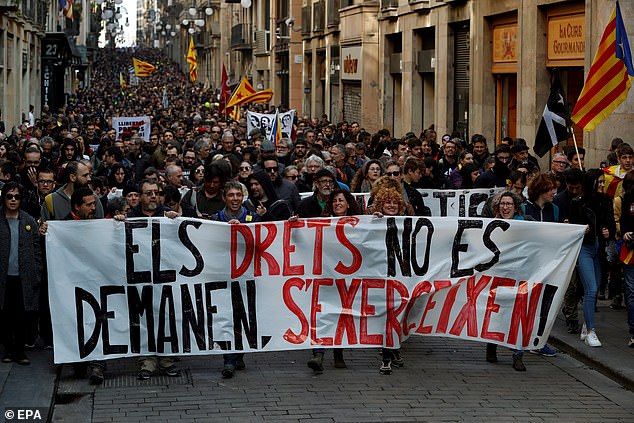 Several demonstrators hold a banner reading in Catalan ‘The rights are not demanded. They are exercised’ as several thousand people march through the streets

‘It was about tightening the rope without it breaking,’ Vila, who faces up to seven years in jail for misuse of public funds and disobedience, told the court.

Prosecutors accuse the defendants of implementing a strategy concerted by the regional government, parliament and pro-independence associations to achieve secession outside the law.

They accuse nine of them of rebellion, a serious offence that implies a ‘violent uprising.’

Prosecutors point for instance to damage made to police cars during a pre-referendum protest on September 20, 2017, or claim separatists used citizens as ‘human walls’ against police dispatched to stop the referendum.

Independence supporters and the defendant’s lawyers, however, argue there was never any violence.

Jordi Sanchez, head of the powerful ANC pro-independence association who was at the protest on September 20 and faces up to 17 years in prison, accused prosecutors of ‘criminalising and penalising a demonstration.’ 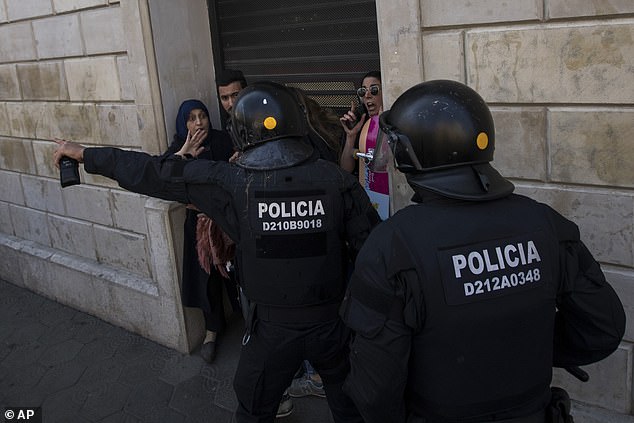 Brian May was 'near death' after suffering heart attack while gardening

How big was the earthquake in New Zealand?