NEWSCABAL
NEWSCABAL > fashion > Cardi B's doppelgänger is making the internet do one big double-take, and we're pretty sure they were separated at birth
fashion

Cardi B's doppelgänger is making the internet do one big double-take, and we're pretty sure they were separated at birth 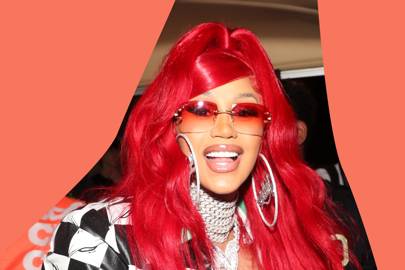 Every so often there’s a celebrity lookalike who drives the internet into a frenzy, such as the Amanda Seyfried doppelgänger who sent social media into a frenzy. This time around, it looks like the internet has found Cardi B‘s long-lost twin. After New York City-based hairstylist Claudelande shared a video of her client Ashley with the rapper’s “Up” song playing in the background, folks ran to the comments in awe and shock that the person sitting in the chair wasn’t the regular degular smegular rapper from the Bronx.

The video was originally posted to TikTok on August 12, but a few versions of it have circulated on Twitter and Instagram, too. Truthfully, I was even fooled, and each time I watch the video my brain refuses to comprehend that the woman getting her hair done isn’t actually Cardi B. If it wasn’t for Ashley’s nose ring and arm tattoos, I wouldn’t have known any better.

Jennifer Aniston’s doppelgänger is going viral on TikTok and honestly, we can’t tell the difference

Even in the comments of Claudelande’s video, folks jokingly referred to her as Cardi C or Cardi D. One TikTok user even wrote “I thought that was Cardi without makeup”, and another commenter said, “damn the moment you realise this isn’t Cardi.” And that’s with good reason because Ashley really looks like Cardi’s twin if you ask us.

In order to see this embed, you must give consent to Targeting cookies. Open my cookie preferences.

It’s not every day that you’re compared to a superstar, but Ashley tells Allure that this isn’t her first time hearing comparisons to Cardi B. In fact, it’s happened to her a few times since 2015, which makes sense because that was when the rapper joined the Love & Hip Hop: New York cast and subsequently rose to fame. One time that year, as Ashley entered a lounge, a bouncer mentioned that she resembles Cardi B, and it hasn’t really stopped since then. “Everywhere I go, [I hear] ‘she looks like Cardi B.’ They’ll say it under their breath, and I’ll hear it,” she says.

Even though she’s been compared to the rapper multiple times, she admits that she doesn’t see the resemblance. “I literally try to look every time somebody says it, but I don’t see it,” she shares. She didn’t expect Claudelande’s video to go as viral as it did. She actually became a bit nervous once it did because, well, anyone who is familiar with the internet knows the comment section can go from good to bad in an instant. But thankfully, she shares that most of the comments have been good, which has helped quell her anxiety.

Though Ashley may not see the resemblance, being compared to a talented and beautiful woman like Cardi B has to feel like an honor. The Bronx rapper has long cemented her status as a beauty icon with her extensive wig collection and her flawless makeup looks. It doesn’t look like Cardi B has seen the video yet, but we can only imagine what the superstar would think after seeing a fellow New Yorker that looks like her.

Queen of quilts: 10 of the best padded jackets – in pictures

‘Naomi for president!’: London fashion week comes back to life