Captain Chatter and the stammering student: Ross Willis on his play Wonder Boy


A scared, stammering 12-year-old boy stands in a room full of strangers waiting to tell them his name. Sweat pours, his heartbeat accelerates and all the butterflies in the world enter his stomach.

Growing up is hard enough but growing up with a stammer is relentless. The self-loathing and shame that can come with stammering is all-consuming. The constant worry about anything which involves talking is never-ending. The persistent frustration when your own body and brain betray you. Never getting to feel truly present in life because you’re always on the lookout for words that might trap you and frantically trying to find substitute words as a replacement. It’s really hard to express the pain of not being able to say your own name. I hope my play Wonder Boy does that.

I wanted to write something that could only ever be a piece of theatre. I wanted it to be inherently theatrical. It felt really important to formally reflect the great inner operatic pain that comes from not feeling seen or being able to express oneself. The first plays I ever read were Blasted and Cleansed by Sarah Kane and for years I just presumed all plays were like that. One of the few joys I’ve had during lockdown is regular daydreaming with Wonder Boy director (and theatrical queen) Sally Cookson about how the hell she’s going to actually put this on stage. Those conversations have felt incredibly galvanising at a time when imagination in my life has felt quite rare.

Wonder Boy tells the story of 12-year-old Sonny who, when cast in his school production of Hamlet, must learn to finally start speaking. He’s relentlessly stalked by his ex-imaginary best friend Captain Chatter who’s determined to stop him from speaking. While most imaginary best friends probably realise they’ll only ever have a job for a year or two, Captain Chatter has always seen it as a job for life.

Hopefully, it’s mischievous and surprising and full of playfulness and pain and a great hope. Perhaps a little bit like a John Hughes film on acid.

SONNY is unable to join in.

FISH Welcome to Lunchtime Drama Club. Don’t think of this as a punishment, you can do anything you want here. Jason stop doing that. I thought it would be Super Fun if we could pass this pillow around and each say something we enjoy!

I’m Miss Fish. I’m your new headteacher. I enjoy the company of my cats, I have five and a half.

A fluffy pillow begins to fly to SONNY. It flies like a comet crashing to earth. SONNY looks utterly terrified about speaking in public. The walls start to crack.

CAPTAIN CHATTER ​Coming around that circle is a pillow of pure fluffy evil!

The pillow flies faster and faster. The ground shakes.

CAPTAIN CHATTER Get ready to attack on my signal!!

The pillow lands in SONNY’s hands.

A hundred eyeballs come out from the floorboards.

The pillow also reveals eyes and stares at SONNY.

CAPTAIN CHATTER ​Some of these people don’t know you stammer yet. It’s a chance to get it right. Just open your mouth. POW!

CAPTAIN CHATTER ​“My name is Sonny.” The power of speaking in public! KA-POW!

CAPTAIN CHATTER ​Pretend you forgot the question! The power of deflection! BOOM!

The ceiling collapses even more. CAPTAIN CHATTER desperately holds it up, trying to stop it from crushing them.

CAPTAIN CHATTER ​PLOP! NOOOOOO! Don’t say your name! It has your arch enemy, the letter S in!

CAPTAIN CHATTER ​OUCH! ​ NOOOOOO! You can’t say art remember!? It’s a trap from the Evil League Of Vowels! Sonny you’re sweating so much!

SONNY sweats out a tsunami.

CAPTAIN CHATTER Sonny what’s going on with your face!?

CAPTAIN CHATTER ​ Say something! Say anything!

A handful of the words ENJOY and ART fall from the sky. SONNY desperately tries to catch the falling words but they slip through his hands.

A mass of words fall faster and heavier around SONNY. SONNY tries his hardest to catch them but he just can’t. As they touch SONNY they scrape, scratch and burn him. A drowning SONNY fails to catch a single word.

CAPTAIN CHATTER I told you not to come today! 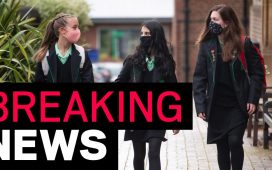 Overhaul of skills and vocational education to focus on employability

Universities doing all they can for students | Letter

Music A-level: exam board says it was wrong to drop only black composer