Campaigners fear parts of new navy supply ships will be built abroad before being welded together in Britain.

A £1.5billion deal for three Fleet Solid Support vessels could be awarded to a foreign-led bid.

Defence Minister Jeremy Quin admitted overseas companies may be able to cash in on the project, saying the “contracting party may be UK or non-UK”.

The ships will restock the aircraft carrier HMS Queen Elizabeth
(

Four consortia were each given £5million by the Ministry of Defence to develop their bids earlier this month as the Government began the “competitive procurement phase”.

“Every consortium has a UK contingent or is exclusively UK,” said Mr Quin, following a written parliamentary question.

“A contract will subsequently be awarded for the manufacturing phase where the winning bidder will refine their concept design prior to the build of FSS ships.

“The Government has made clear that a substantial part of the build will be conducted in the UK, there is a requirement to integrate all ships in a UK shipyard.”

The 65,000-tonne vessel is one of two aircraft carriers for the Navy
(

Mr Quin insisted that “social value” – the benefit to local communities – “will represent a significant proportion of the evaluation of the bids”.

He added: “The contract will be awarded to a UK firm acting solely or as part of a consortium.

“The exact form that the contract will take is yet to be determined.”

Labour MP Kevan Jones, who chairs Parliament’s cross-party Group on shipbuilding, told the Mirror: “A foreign design for a UK warship would not just undermine UK expertise in our design houses, it would cut UK supply chains out of the manufacturing process – particularly small and medium-sized businesses.

“Shipbuilding in the UK depends on high-value, skilled work being undertaken domestically.

“We do not want to be in a position where all we do is simply assemble pieces designed and manufactured in other countries.”

Confederation of Shipbuilding and Engineering Unions general secretary Ian Waddell said: “Our highly-skilled members working in shipyards and supply chain companies across the UK will be at a loss to understand why the MoD persists in trying to offshore their jobs.

“We have superb workers who could repeat the success of the aircraft carriers and build blocks around the UK, spreading prosperity across the country and lifting coastal communities at a time when they need it most.

“It beggars belief that our government is paying foreign companies to come up with ways to take our work abroad, and there will be real anger in the industry if these ships are not built in the UK.”

“Given at least two of the consortia have UK partners who have no track record on design, build and final assembly of warships, the Government needs to answer the repeated questions on just what ‘significant’ means in terms of UK content in these key areas.

“These are the areas that will provide jobs, apprenticeships and prosperity to UK yards and UK supply chains.” 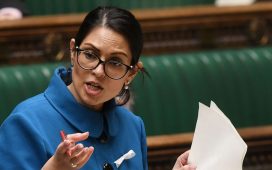