Campaign for Scottish independence to resume 'in earnest' next year, says Nicola Sturgeon 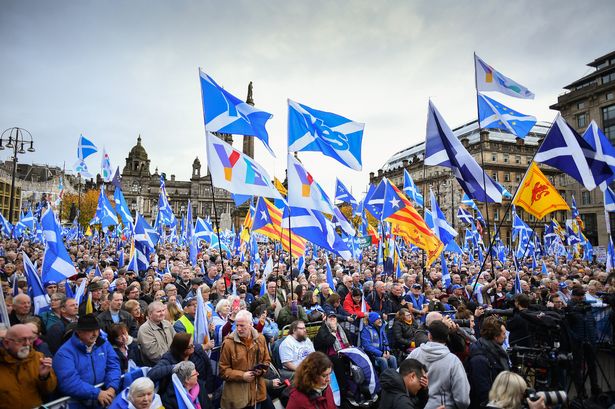 Nicola Sturgeon has announced the SNP’s campaign for independence will resume “in earnest” next year – but only if the Covid situation allows.

The First Minister used a pre-recorded speech at the final day of her party’s latest virtual conference to make a fresh demand for an IndyRef2 to take place before the end of 2023.

The SNP leader has previously signalled her preference on referendum timing but has always insisted it is conditional on the ending of the coronavirus pandemic.

Sturgeon is facing pressure from grassroots SNP members to push forward with planning for another vote on the constitution – but her speech today warned the Covid crisis not yet passed.

It was broadcast less than 90 minutes after the First Minister hosted an emergency media briefing on the discovery of the new omicron variant in Scotland.

Challenging Boris Johnson, Sturgeon said: “My message to the Prime Minister is this: If you have any respect at all for democracy – and if you have any confidence whatsoever in your argument against independence – you too will let the people decide”

In her speech to SNP members, the party leader continued: “Next year, covid permitting, as we emerge from winter into spring, the campaign to persuade a majority of people in Scotland that our future will be more secure as an independent nation will resume in earnest.

“In the course of next year, I will initiate the process necessary to enable a referendum before the end of 2023.

“And just as importantly, our party will set out afresh the positive case for independence.

“We will outline the opportunities and advantages that independence will open up the opportunity to repair the damage of Covid – including the fiscal challenges it has created for all countries – in a way that aligns with our values and priorities as a nation.

“To use our financial and human resources to tackle poverty and give young people a better life.

“To use our vast natural resources to help safeguard our planet and secure green jobs for the future.

“And to rejoin the European family of nations, so that we can expand not narrow our horizons, and grow our trade across the whole of the continent.

“We will also be candid about the challenges the transition to independence will present, and set out clearly how we can and will overcome them.

“And then, friends, we will ask the people to decide.”

Sturgeon added: “Often in Scotland, we talk about becoming independent as if it’s something unusual, something that no country has ever done.

“The reality is very different. In the last 60 years or so, more than 100 countries have become independent.

“Very few – if any of them – have the resources and advantages of Scotland.

“The fact is independence is the normal state of affairs for countries the world over.

“The self government it encapsulates is the building block for the progressive internationalism that we stand for.

“And for countries of Scotland’s size, the simple truth is this: independence works.”

Jackie Baillie, Scottish Labour’s deputy leader, said: “It is deeply disappointing and irresponsible, in the face of a deepening public health crisis, that the focus of the First Minister is once more on sowing division between Scotland and the rest of the UK.”

Pamela Nash, chief executive of Scotland in Union, said: “This was yet another tired speech from a First Minister keeping Scotland on pause while she obsesses about the constitution.

“She has a cheek promising to resume her campaign for division, when the reality is the SNP hasn’t stopped campaigning since September 2014 – and yet a growing majority of people in Scotland want to remain part of the UK.

“Ramping up her campaign just as the NHS comes out of a difficult winter would be grossly irresponsible, and it’s time for Nicola Sturgeon to accept that a positive case for separation doesn’t exist.