A miracle bible marked with bullet holes from a German machine gun helped save the life of a British World War I soldier, his daughter claimed.

The bible was said to have stopped two bullets from hitting Private Leslie Friston as he lay in a hospital bed recovering from a gas attack.

Pte Friston, who served with the Royal Army Medical Corps, was blinded and left with respiratory problems following a gas attack in France in 1917.

As he lay recovering in hospital, a German aircraft passed overhead and machine-gunned the makeshift building’s tin roof.

Two of the bullets struck the then 23-year-old soldier’s holy book, which was next to him on a bedside table and stopped the bullets hitting him.

The soldier’s bible still bears the scars of war more than 100 years later with two bullet holes from where it ‘took the brunt’ of the German machine-gun attack.

Pte Friston, who served as a nurse and was from Surbiton, Surrey, survived the war thanks to the book and brought the bible home to his family.

He kept it close to him until his death in 1958 aged 64, when his possessions were passed to his daughter Ena Thompson, now 87.

‘He said the bible saved his life as it took the brunt of the attack,’ Mrs Thompson, from Bournemouth, Dorset, said.

‘If the bullets had landed just a few inches further towards him, he would not have survived – and I wouldn’t be here today.

‘He was incredibly lucky and I think he knew this as he kept the bible with him for the rest of his life.

Pte Friston signed up to fight in the First World War at the age of 21 and served with the 3/3rd Home Counties Field Ambulance unit in France and Belgium during the war years. His service number was 3621, later changing to 88882.

Records show he was injured by the gas shell in 1917 when he was aged 23, making him eligible to be awarded a wound stripe.

‘He was a nurse, so it must have been awful and frustrating for him to be lying in a hospital bed himself’, Mrs Thompson said.

‘He just would have wanted to help other people.

‘It must have been absolutely terrifying. He was badly gassed and it blinded him. He was bed-ridden so he must have heard the aircraft approaching – but he was powerless to do anything about it.’

Pte Friston’s sight returned after he came back to England and he went on to run a grocery store in Hampton, Richmond, west London.

His younger brother Edward died aged 19 during the war while his elder brother Tom survived.

Every year, Mrs Thompson donates to the Royal British Legion and buys a wooden cross to be planted at Westminster for the charity’s annual Field of Remembrance event. This cross is dedicated to Edward.

Mrs Thompson described her father’s bible as ‘such as special thing’.

Private Leslie Friston, third from left, middle row, in picture during his time in a makeshift hospital after suffering a gas attack on the Western Front

She added: ‘It still has his name and his service number in it which he wrote.

‘When I hold the bible I just get a special feeling. It might sound a bit strange but it makes me feel comfortable and happy. It’s a nice feeling that it saved his life. It makes me feel close to him.

‘I am extremely thankful to the WW1 generation for all they did for us. It’s hard to imagine what the world would be like if things had gone differently all those years ago.

‘We owe it to that generation to remember their sacrifices.’

Mrs Thompson’s husband Neville Thompson, who died in 1989, served with the army during the Second World War as a signaller in the Royal Corps of Signals.

Private Leslie Friston’s daughter, Ena Thompson, said ‘he [her father] said the bible saved his life as it took the brunt of the attack’

‘Everybody likes the Legion because it does so much to help,’ the retired food store owner said.

READ  Could ‘alcosynth’ provide all the joy of booze – without the dangers?

Almost 1.7 million British troops were wounded during World War I and over 700,000 were killed.

In total, the war resulted in the deaths of 13 million military personnel and left 21 million more wounded. 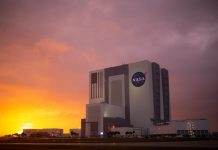 Nasa SpaceX launch: What time is the rocket liftoff and how can I watch it live