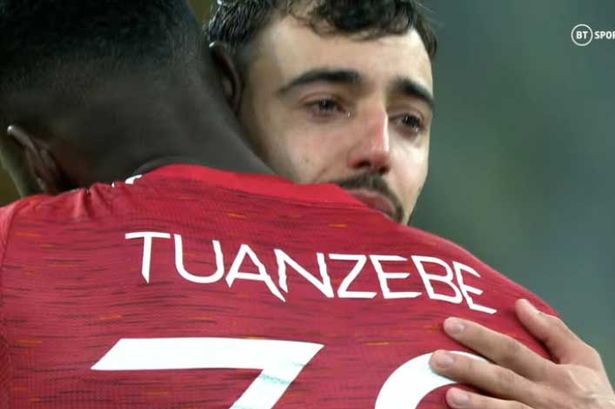 The Manchester United star was his side’s captain for the night, but he was unable to inspire his side to victory on a disappointing evening in Gdansk

Bruno Fernandes could not hide his despair as Manchester United lost the Europa League final to Villarreal in Gdansk.

The Portuguese superstar was United’s captain for the night in place of injured club skipper Harry Maguire, but he failed to rouse his side as they struggled to create clear-cut chances in the final against Unai Emery’s La Liga outfit.

Fernandes was clearly distraught after the defeat in the mammoth penalty shootout, which ended when goalkeeper David de Gea became the 22nd of the 22 players who ended the match to take a penalty.

The Spanish international saw his effort saved by opposite number Geronimo Rulli, who had scored his kick seconds earlier to make the score 11-10.

Fernandes was left distraught at the loss

Villarreal took the lead in the first half when forward Gerard Moreno got in between defenders Victor Lindelof and Eric Bailly to turn home a free-kick.

That goal had come largely against the run of play, and United were able to strike back in the second period when Edinson Cavani pounced in the six-yard box.

That had looked as though it was going to rouse Ole Gunnar Solskjaer’s side to yet another come from behind victory, but Villarreal held firm against a United side that tired the long the game went on.

Solskjaer failed to make a substitution in normal time during the game, and waited until the 100th minute of the match to make his first change when Fred replaced Mason Greenwood.

Fernandes had hoped to make the Europa League his first major trophy with United, and before the game he spoke about how much he wanted to win it.

“I always said individual trophies are really good for players,” he said after winning United’s Sir Matt Busby Award as player of the season.

“It lifts you up, of course. I would never say I don’t want individual trophies.

Fernandes had hopes to win his first trophy with United

“(But) it’s not more important than a group trophy, a team trophy, for me, but it is always important.

“But at the same time it means people are liking you, the way you play, the way you’re trying to help the team, the way you do things – so that is more important for me.

“But more important than that is winning a trophy at the end of the season and this is all about this because football is a team sport and for me it’s about winning trophies.”