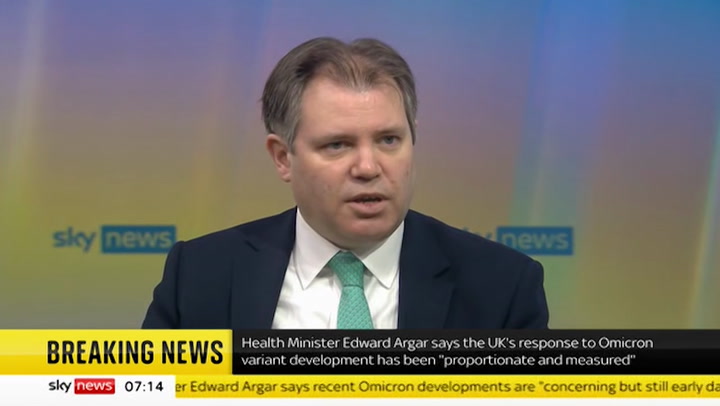 Brits should “reflect carefully” on risks from the new Omicron Covid variant before going to Christmas parties, a Tory health minister has indicated.

Edward Argar said the government will let people in England “use their judgments” about whether to attend festive bashes this year.

Despite his boss Sajid Javid giving a Commons statement at 3.30pm today, the minister said he is “not anticipating” further restrictions being unveiled in England in the next three weeks.

But he feared he won’t have time to attend any Christmas parties himself – and added: “I think everyone will be hearing news about this new variant and will reflect carefully on how they are going to react to it.”

It comes as the government enacts compulsory face masks in England’s shops, public transport and hairdressers from tomorrow – but not pubs and restaurants like in previous rules.

Boris Johnson also stopped short of forcing crowded venues like nightclubs to ask punters for a vaccine passport, another part of England’s Plan B for winter.

That is despite voluntary guidance saying: “You should wear face coverings in crowded and enclosed areas where you come into contact with people you do not usually meet.”

Mr Argar was asked about his approach to Christmas parties on Times Radio.

He replied: “Well, I think in the Department of Health these days, I haven’t had a huge amount of time recently for parties, I fear I won’t have in the coming weeks.

“But I think everyone will make their own judgement calls about these things.

“When I last was interviewed on on your programme, we were talking about mask wearing before it was compulsory and about people using their judgments in crowded places or with a lot of strangers.

“And I think everyone will be hearing news about this new variant and will reflect carefully on how they are going to react to it.”

Nine UK cases of the variant, which has more than 30 mutations, have been discovered as of Monday including six in Scotland, and ministers expect more to emerge.

Ministers said the restrictions were a bid to buy time while scientists work out whether the variant could be more resistant to a vaccine.

People are also urged to take lateral flow tests before going to Christmas parties or other crowded settings.

Government guidance says: “You are at higher risk of catching or passing on COVID-19 in crowded and enclosed spaces, where there are more people who might be infectious and where there is limited fresh air.

“You may wish to take a rapid lateral flow test if it is expected that there will be a period of high risk that day.

“This includes spending time in crowded and enclosed spaces, or before visiting people who are at higher risk of severe illness if they get COVID-19.”

Face masks will be mandatory by law in England’s shops, public transport, hairdressers, banks and post offices from tomorrow – but not pubs or restaurants – with £200 fines for offenders.

But ministers have had to defend the decision not to enforce face coverings in pubs or restaurants, even crowded ones.

Mr Argar said people standing at the bar are often only there for a short time, and will then “sip a drink on the way back to their table, where they’ll be seated”.

Mr Argar insisted “It’s about striking a proportionate balance,” adding: “It’s in the nature of the venue. In a pub you’re drinking. You can’t do that if you’re wearing a mask.”

Teachers and pupils in Year 7 and above are now being “strongly advised” to wear masks in communal areas outside classrooms in England.

From 4am tomorrow, all travellers to the UK will have to take a paid-for PCR test on or before day two after their arrival, and isolate until the result comes back negative.

Meanwhile Covid booster jabs look set to be expanded to all over-18s in the UK, down from over-40s now. And the six-month minimum gap between second and third dose could be reduced.

All contacts of suspected Omicron cases will also have to self-isolate for 10 days, regardless of whether they’re fully-vaccinated.

Despite the crackdown, the minister said he was “looking forward to a Christmas spent with family and friends”.

Asked if the Government might tighten up the rules even further in the next three weeks, Mr Argar said: “It’s not something I’m anticipating.”