SUPERSTAR Lewis Capaldi said he was planning to get “p****d as a fart” at last night’s Brit Awards — but would not be trying to find a new girlfriend.

As he collected the New Artist award, Lewis necked a bottle of beer, then said: “Thank you very f*****g much. See you later.”

This prompted bosses to mute him as the awards went out on television, simply running pictures and no audio with a message saying: “Audio muted”.

Asked earlier how he would celebrate, he told The Sun on the red carpet at London’s O2 Arena: “I’ll go, ‘Yippee.’ I’m going to get p****d regardless, it doesn’t really matter.

“Whether I win or not it’s going to be the same outcome. I’ll be p****d as a fart. It’ll be nice to win one I guess so maybe hopefully we’ll see what happens. But if not, as I say, still going to get p****d . Probably going to have a good time. It’s all good.”

Lewis, who wrote hit single Hold Me While You Wait about his ex Paige, said he would not be using the showbiz event to find a new girlfriend.

Asked if he had a new partner, he added: “Not quite yet no but the search continues. On the prowl? I dunno, that makes it sound quite lascivious. But no, I’m definitely focused on getting hammered for sure.”

The singer was a relative unknown this time two years ago and missed out on the prestigious Critics’ Choice award to Sam Fender at the 2019 Brits.

But his record Divinely Uninspired to a Hellish Extent broke numerous records, becoming the most-streamed British debut album of all time.

And his single Someone You Loved — which won Song of the Year last night — topped the UK Singles Chart for seven weeks. In October 2019, it reached No1 on the US Billboard Hot 100.

Lewis said: “It’s been f*****g unbelievable. It’s very hard to process because everything’s so fast sometimes but it’s just been the most incredible last 12 months and actually we’re finishing it up, we’re going to finish this album tour on October 2 in the O2. So that’ll be a good way to see it all off.”

Asked to choose a highlight of the past year, he quickly added: “Glastonbury for sure just because I’ve never seen that many f*****g people in one place before. I guess just meeting people like Elton John, Ed Sheeran, Stormzy, just all these people who I’ve been a fan of, getting to meet them. And just touring the world I guess.”

The Brits show opener, who turns 24 tomorrow, was joined onstage by 70 dancers as she claimed she wanted to make her performance as dramatic as possible.

Others who performed included Album of the Year nominee Harry Styles, 26, and US rapper Lizzo, 31.

Lewis was pipped to the post for the Male Solo Artist which was won by grime star Stormzy, 26.

‘SHE SAID SHE WAS SAD’

ALL THE REST, RITA

Rapper Dave, 21, was crowned winner of the Album of the Year for his debut release Psychodrama, which won the Mercury Prize.

Kate Gosselin celebrates 45th birthday with kids- but NOT Hannah and Collin, who live with dad Jon 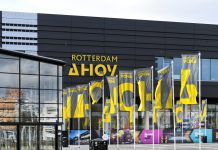 Who is Drake’s ex? Inside Sophie Brussaux’s life in France with son Adonis as rapper shares first photos

Who is Drake dating now and who are his ex-girlfriends?