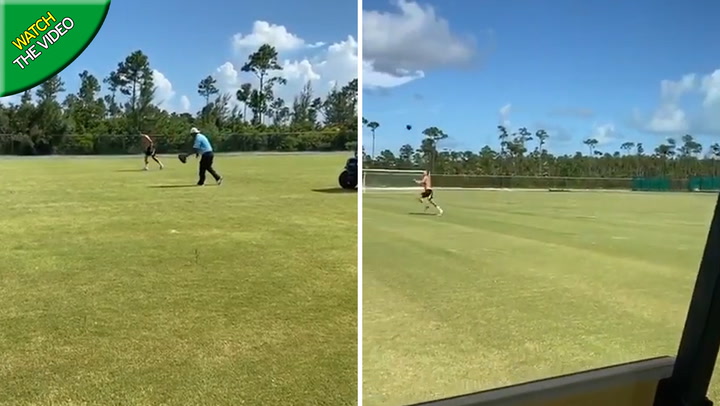 Harry Kane mixes it up with some NFL-style training

Aden Durde may be the mastermind behind the impressive defensive line play of the Dallas Cowboys in 2021, but his thoughts are still very much 4,000 miles away at his home in London.

Durde, the defensive line coach for the iconic NFL franchise, was speaking to reporters about his participation in the league’s ‘My Cause, My Cleats’ initiative where he is supporting the Godwin Lawson Foundation to raise awareness of knife crime in London while ensuring Lawson’s name will never be forgotten.

Lawson was just 17 when he was stabbed and killed in March 2010 while attempting to help two friends who were attacked by a group of men in Stamford Hill, north London. His mother Yvonne and father Calvin founded the Godwin Lawson Foundation in 2012, using the legacy of their son to try to prevent gun and knife crime.

Aden Durde, a British coach working in the NFL, has masterminded a strong Dallas Cowboys defensive line that has surpassed all expectations thus far in 2021

During the Thanksgiving 36-33 defeat to the Las Vegas Raiders, Durde wore custom trainers displaying the name Godwin Lawson alongside the Union Jack and a number of motivational descriptions.

“I went to the NFL UK office and I wanted to highlight a charity in my local area that does positive work, but a smaller charity,” he said. “I think it’s really important, I think there’s a lot of people doing a lot of really good work that goes unnoticed.

“There are big charities out there doing great work but I think there are a lot of smaller charities doing the real work with young people especially, that’s important to me, in my local area and I just wanted to highlight that and I got a group of charities I looked at and spoke to.

“Those issues, especially in my local area in north London are important and important in most inner cities – it kind of stuck out to me when I saw Godwin’s charity. Sitting down and speaking to Yvonne and hearing the story, it resonated with me and from that I wanted to work with them. That’s why I’m doing it, it’s close to my heart.”

The defensive line coach pointed out that fellow gridiron Brit Efe Obada, defensive end for the Buffalo Bills, has also taken part in the movement by supporting the BIGKID Foundation.

“I think the most important thing the NFL do is they let people voice what is important to them; if you give people a platform to do something they’re passionate about, you get the best out of people,” Durde said.

“One of the reasons I wanted to bring this is, you’re talking about Godwin Wilson, so his name is not forgotten. There’s another kid, his name shouldn’t be forgotten, they are not stats, they’re people that have died from something that is happening where I’m from.

It is reported that 28 teenagers have been murdered in London in 2021 – just one fewer than the highest recorded number of deaths in a single year (29 in 2008).

Durde has come from London to the bright lights of the NFL, first coaching with the Atlanta Falcons before he was hired as the new defensive line coach of the Dallas Cowboys in January 2021.

The 42-year-old believes sports like American football can help at-risk people escape dangerous situations by providing them with opportunity and hope.

“I think American football can [help] but I think the more opportunities kids have to be around more inspiring activities is important and I think those are the things I really want to bring to the forefront,” Durde added.

“Sometimes people or the environment tells you you can be one thing, but there’s a whole world of things you can be – and they never show you that.

“When I went to play football, it made me believe I could be something the I never thought I could be before. I think that work people do is so important and they never get talked about. They’re volunteers, they turn up every week and the same people helps kids, drive them to different games, they go above and beyond when maybe their parents might be working.

“Those things to me are the interventions that at times are missed, because of just funding or just lack of resource. The work Yvonne is doing, she meets these at-risk kids and to help them and inspire them is super important, to do that and to have been through what she’s been through, after I heard her story, it’s quite emotional. That’s why I’m doing it.”

The Middlesex-born coach believes American football can truly change lives, with himself being a prime example.

Durde called on young people to get into the sport in order to realise their own potential.

Follow the Dallas Cowboys on Sky Sports NFL and NFL Game Pass, starting this Thursday night at 1.20am against the New Orleans Saints.