Britain has severed ties with the EU, “bonged” out at 11pm by Big Ben 48 years after the UK joined the European Economic Community.

Eleven months after the UK formally left the EU, the Brexit transition period – which has meant the relationship between the UK and the bloc largely remained as if Britain was still a member – came to an end.

Businesses are braced for disruption as hauliers, port chiefs and travellers get to grips with new arrangements from this morning.

The Queen gave Royal Assent to the EU (Future Relationship) Bill in the early hours of Thursday.

At 12.25am, the monarch signed into law the agreement finally reached between the UK and EU on Christmas Eve.

After the deal was rubber-stamped by Parliament, Boris Johnson said: “The destiny of this great country now resides firmly in our hands.

“11pm on December 31 marks a new beginning in our country’s history and a new relationship with the EU as their biggest ally.

Government officials were braced for border disruption as the new rules came into force.

British firms sending goods to the bloc must make customs declarations and ensure they have correct permissions for controlled products.

Whitehall’s reasonable worst case scenario plans include only 30% of lorries being ready when they reach Kent ports such as Dover and Ramsgate, which would cause queues of up to 7,000 vehicles.

But experts believe the next few days will pass quietly, with any major delays not unfolding until next week.

They believe many hauliers have decided not to travel while they wait to see how much disruption there will be.

Holidaymakers are also unlikely to be heading to ports because 78% of England is in Tier 4 of the coronavirus alert levels, which bans foreign travel.

As of Thursday, around 450 hauliers had obtained Kent Access Permits to enter the county on Friday.

Hit squads from the Driver and Vehicle Standards Agency were on standby to pounce on lorry drivers not in possession of a pass.

HGV drivers will be fined £300 and forced to leave the county if they enter Kent without the new-style, 24-hour permit, which local officials dubbed a “Kermit”.

While Kent-based or UK-only hauliers will not be stopped, it is possible other truckers making local deliveries will have to show their papers. 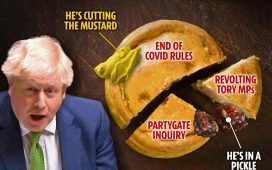