Unique micro homes are to be built on old garage sites in Bristol to help the city tackle its housing crisis.

“Gap homes” – so-called because they will be constructed in small spaces between houses and gardens – would be made off site and dropped into place across the city.

The concept, which its developers say is the first of its kind, features areas of shared green space, community gardens and outdoor seating to encourage neighbourly connections and interactions.

A consultation on the first proposed site in Horfield, to the north of the city centre and close to Southmead hospital, has been launched by the city council.

The council said in its consultation: “The intention is to deliver nine affordable homes on this site and we are exploring opportunities for how these will be let to benefit the local area.

“This project will revitalise the disused garage plots and deliver much-needed homes. Manufacture of the houses would largely be carried out off-site which would cause less disruption than a traditional build during the construction phase.”

The lack of affordable housing is one of Bristol’s most pressing problems, with the city’s mayor, Marvin Rees, recently describing gentrification as a “ferocious challenge”.

Architects BDP, which has come up with the gap house, said it was a “contemporary, cost effective eco-home designed to fit on to urban garage plots and super-insulated”, adding: “They are designed with large windows and low energy lighting and fitted with solar panels and air source heat pumps.

“Placing these new, attractive and carefully designed houses in their place will not only help deliver much-needed homes, it will also bring new energy and life, revitalising neighbourhoods and helping to build stronger, more resilient communities.”

Bristol has an estimated 2,000 garages on 300 sites , so BDP says the concept has huge potential in terms of helping to tackle the city’s housing crisis.

Martin Jones, landscape architect director in BDP’s Bristol studio, said they could work well as homes for key workers. He said “gap homes” could be rolled out in cities across the UK.

They will have two storeys, including an open-plan living/dining room and a kitchen with a bedroom upstairs. He said: “It’s important they look stylish.”

Planning permission is to be sought for the first gap homes in Horfield. 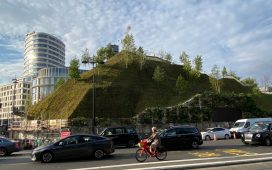