Premiership leaders Bristol Bears completed their eighth win in 11 games this season as they beat Leicester 17-3 to cement their place at the top.

But it was not a great performance by Bristol, who came from 3-0 down to score both their tries against 14 men.

Will Capon and Piers O’Conor both went over for converted scores in a five-minute burst just before the break.

Ioan Lloyd landed both conversions and a second-half penalty, the only score of the second half.

But Tigers had taken the lead through an early Joaquin Diaz Bonilla penalty and were only undone when they had centre Matias Moroni yellow-carded for a deliberate knock-on 32 minutes.

Within two minutes, Bristol hooker Capon was over before centre O’Conor then finished off a well-worked move to go under the posts.

But, after being 14-3 down at the break, Tigers rallied well, despite being without their missing international players as well as suspended pair Jasper Wiese and Hanro Liebenberg.

They did well to keep the second-half score down to just one Lloyd penalty as Bristol laboured well short of collecting a try bonus point. 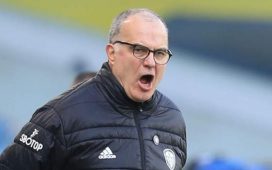