Scientists have made a breakthrough in the search for a treatment for Duchenne muscular dystrophy.

Known as DMD, the muscle-weakening condition is the most common fatal genetic disorder in children, affecting as many as one in 3,500 boys worldwide.

In a study on dogs researchers found a way to restore muscle levels to up to 92 per cent of normal levels within weeks by fixing their DNA.

There is currently no cure for the condition and it often kills patients by their early 30s by making the heart too weak to pump or the chest too weak to breathe.

Experts say their approach is new because it tackles the cause of the disease instead of its symptoms, and is the first time a therapy has worked in a large mammal. 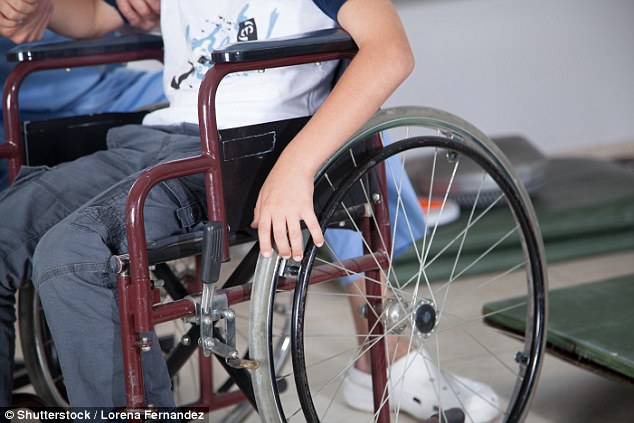 Duchenne muscular dystrophy, which mostly affects boys, leaves many patients needing a wheelchair because they become so weak and many often die before their mid-30s

The research by the University of Texas’ Southwestern Medical Center explored how editing genes could rebuild muscle.

Scientists said what they managed to achieve was ‘unprecedented’.

It was already known that DMD is caused by the body failing to produce the protein dystrophin, which is important for muscles to be able to function properly.

DMD mainly affects boys because it is caused by a DNA mutation on the X chromosome, of which boys only have one. Girls have two X chromosomes so have a backup if one is damaged, although they can carry DMD and pass it to their sons.

By editing damaged DNA the researchers are able to restart the body’s production of dystrophin, boosting levels close to normal levels.

Levels of vital muscle protein rose within weeks of treatment

In the heart dystrophin levels could rise to 92 per cent of a normal amount, and in the diaphragm – the main chest muscle needed for breathing – by 58 per cent.

In the study dystrophin levels soared within several weeks of the dogs receiving the treatment.

This, the scientists say, could save the lives of people living with DMD.

‘This would hopefully prevent patients from dying of the disease’

‘Children with DMD often die either because their heart loses the strength to pump, or their diaphragm becomes too weak to breathe,’ said Dr Eric Olson.

What is Duchenne muscular dystrophy?

Duchenne muscular dystrophy is a neuromuscular condition caused by a lack of protein called dystrophin.

Around 100 boys with the serious condition, which causes progressive muscle weakness, are born in the UK each year.

It is a genetic condition and can be inherited.

The condition starts early in childhood and maybe detected when noticing a child has difficulty standing up.

Children with DMD will struggle to walk, climb and run.

The condition causes muscles throughout the body to weaken and waste, including those of the heart and chest.

‘This encouraging level of dystrophin expression would hopefully prevent that from happening.’

No effective treatment is currently available for people with DMD, and most end up in wheelchairs because they become so weak and die before their mid-30s.

Symptoms usually appear when a child is between three and five years old, and begin with weakening of the hips, thighs and shoulders.

By the time a patient reaches their early teens the heart and breathing muscles begin to also be affected.

How the research was carried out

To test whether they could bring dystrophin back up to healthy levels researchers used a harmless virus to carry gene-editing molecules.

The molecules used a process called CRISPR in which sections of DNA can be cut out and replaced to repair defects.

Dr Leonela Amoasii, lead author of the study said: ‘Our strategy is different from other therapeutic approaches for DMD because it edits the mutation that causes the disease and restores normal expression of the repaired dystrophin.

‘But we have more to do before we can use this clinically.’

By targeting the CRISPR molecules to a part of the damaged gene responsible for producing dystrophin, the researchers repaired the dogs’ DNA and the body restarted production of the vital protein.

Within several weeks, levels of dystrophin had risen dramatically and the dogs’ muscle fibres began to rebuild and grow stronger.

The same effect was then reproduced in human cells and in mice, but more research will be done to explore how well the therapy works over the long term.

The team’s findings were published in the journal Science.