BOXING Day sales were a flop on the high street — with many shops closed and spending down by more than a quarter.

London’s usually rammed West End shopping district, including Oxford Street and Regent Street, was closed for the first time in 150 years due to Tier 4 Covid-19 restrictions.

Shoppers in lower-tier areas piled into stores to snap up some post-Christmas bargains but spent less than normal.

Barclaycard, which sees nearly half of the nation’s credit and debit card transactions, said 68 per cent of deal-hunters shopped online and spent an average of £162 each.

But visitors to bricks-and-mortar stores spent just £78 each — the worst result for retail in 20 years.

Chris Daly, boss of the Chartered Institute of Marketing, said: “This was a Boxing Day like no other.

“Retail footfall was significantly lower than at any time in recent memory.

“The Prime Minister told us to avoid ­Boxing Day crowds and many people heeded this.”

But some in Tiers 2 and 3 started queuing in the early hours.

About 200 were outside Next in Leicester before 6am yesterday.

Hundreds waited in line for Selfridges at Birmingham’s Bullring centre throughout the day, while shopping areas in Newcastle and Liverpool were busy.

But stores in these areas saw less than half the usual Boxing Day trade.

The Covid virus has cost London’s West End £2billion this Christ­­mas after losing 80 per cent of its sales.

It hasn’t missed festive open­ing since 1871. 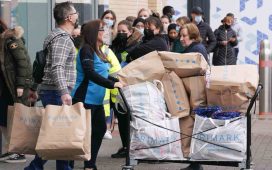 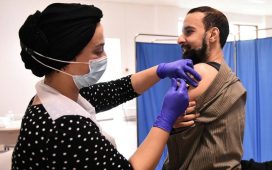