Even though it smells like rotting flesh, the so-called ‘Corpse Flower’ is a huge draw at botanical gardens all over the world.

In addition to its shockingly putrid scent, it can grow over ten feet tall and only blooms every few years—and even then just for a few days.

But the flower, which originates in Sumatra, is difficult to cultivate and botanists are worried the small number of viable specimens will lead to inbreeding. 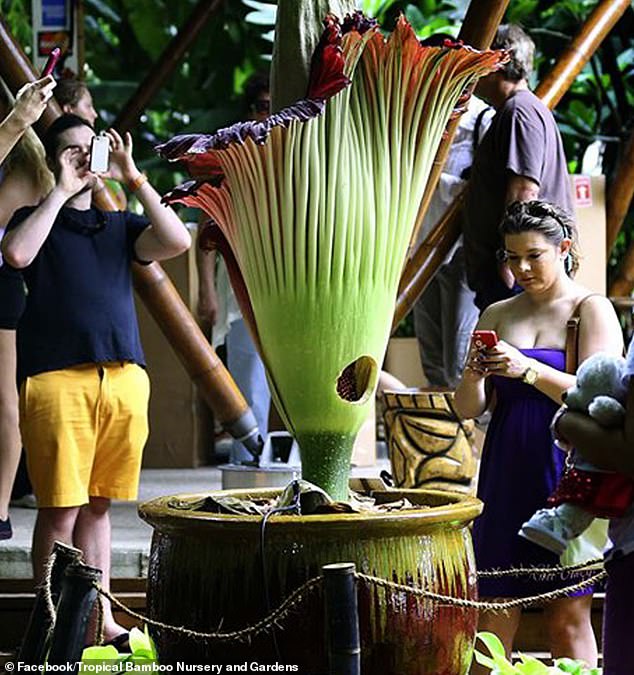 Horticulturalists are gathering a veritable ‘family tree’ for the infamous corpse flower, or amorphophallus titanium, to prevent the endangered flower from falling prey to inbreeding

The 500 or so corpse flowers growing outside Indonesia are all closely related, making them more vulnerable to disease and other issues.

‘When you don’t have a lot of genetic diversity, you can get what’s called inbreeding depression because you’re basically breeding closely related plants with each other,’ Susan Pell, deputy director of the United States Botanic Garden told The New York Times in December.

That can result in fewer viable seeds, weaker seedlings and an overall decline in robustness and diversity.

Their numbers are declining at home, too: The International Union for Conservation of Nature (IUCN) listed Amorphophallus titanum as endangered in 2018 and, due to logging and agricultural deforestation, it’s believed there are less than 1,000 in the wild. 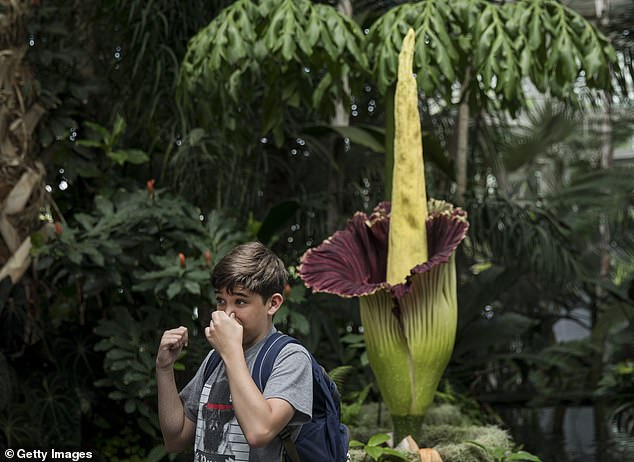 With a scent like rotting flesh, its a good thing the corpse flower only blooms every few years.  Less than a thousands individual specimens remain in its native Sumatra, plus approximately 500 housed in botanical gardens and private collections around the world

The Chicago Botanic Garden is leading the fight to preserve the infamous flower by collecting genetic information and historical data from specimens in public gardens and private collections around the world.

‘Sprout,’ a six-foot corpse flower that came to the Chicago garden in 2018, last bloomed in July 2020 for only two days.

Once the DNA is extracted from the specimens, CBG conservation scientist Jeremie Fant told the Times, ‘we’ll create the family tree for each specimen.’

Called the Tools and Resources for Endangered and Exceptional Plant Species (TREES) program, the database will identify good breeding matches and highlight underrepresented genetic traits, similar to how horse enthusiasts use a studbook to match stallions and mares.

The CBG will house also a store of corpse flower pollen that can be quickly shipped when an unrelated specimen blooms.

Researchers at partner gardens are doing the same thing for other rare plants, including a Haitian palm, two kinds of Asian magnolia and a flowering mint found only on Hawaii’s Kauai island.

The seven species were selected, in part, because they’ve been cultivated in botanical gardens for generations and require human assistance to reproduce.

In addition, the usual means of preserving plant specimens—freezing or drying the seeds—kills species like these.

For all their size, corpse flowers are surprisingly delicate, requiring just the right amount of light, water and humidity to thrive in captivity.

The flower bloomed for the first time outside Sumatra’s equatorial rainforests in 1889  at the Royal Botanic Gardens in London.

Since then, it’s garnered headlines all over the world.

A blooming corpse flower was the main attraction this past weekend at Dunedin Botanical Gardens in New Zealand.

Thousands descended on the garden’s Glasshouse to get a look—and a whiff.