Boris Johnson’s team has been accused by a senior Conservative MP of seeking to “blackmail” rebel backbenchers who are attempting to oust the prime minister.

William Wragg, chair of the House of Commons public administration and constitutional affairs select committee, said: “The intimidation of a member of parliament is a serious matter” and advised colleagues to take complaints to the police.

His claim reveals the level of anger and distrust in the Conservative party, as Johnson loyalists attempt to protect the prime minister from the threat of a vote of no confidence over the holding of parties in Downing Street during Covid lockdowns.

Wragg, one of seven Tory MPs to publicly call on Johnson to quit, claimed that party whips were “threatening to withhold investments from MPs’ constituencies that are funded from the public purse”.

Speaking at a meeting of the select committee, he also claimed that “members of staff at Number 10, special advisers, government ministers and others” were involved in a smear operation against rebels.

He said they were “encouraging the publication of stories in the press, seeking to embarrass those they suspect of lacking confidence in the prime minister”. He said this seemed to him “to constitute blackmail”.

Angela Rayner, deputy Labour leader, said: “These are grave and shocking accusations of bullying, blackmail, and misuse of public money and must be investigated thoroughly.”

One Conservative MP, elected in 2019, confirmed that whips had tried to dissuade some from his intake from submitting letters and rebelling against the prime minister through a combination of promises of government positions alongside “bullying tactics”.

“The whole whipping operation is completely broken,” the MP added.

Javid said people should wait for a report by Sue Gray, a senior civil servant, into the parties before casting final judgments. The report is expected to be published next week. 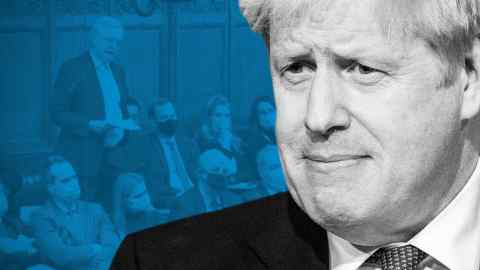 Johnson has secured a reprieve from the threat of an imminent vote of no confidence in his leadership, with many Tory rebels now saying they will wait for Gray’s report before deciding whether to strike.

The prime minister’s allies say he is expected to clear out officials and advisers who were involved in the parties, held during England’s Covid lockdowns, as he tries to save his own job.

But Javid told the BBC on Thursday that the affair had been corrosive, highlighting the parties held by staff in Downing Street on the eve of Prince Philip’s funeral in April 2021 — an event which Johnson did not attend.

“Of course things like this damage our democracy,” Javid said. He added he was “looking forward to disciplinary action” being taken against those involved.

Labour leader Sir Keir Starmer and half a dozen Tory MPs have said that Johnson himself should take responsibility and quit, but a plot by MPs elected in 2019 to topple the prime minister faltered on Wednesday.

The defection of Christian Wakeford, Tory MP for Bury South, to Labour had the effect of persuading many Conservatives to rally behind their party and their embattled leader.

Conor Burns, a minister and ally of Johnson, told the BBC’s Newsnight programme that many colleagues were stepping back from calling for a confidence vote in the prime minister — a view reflected privately by potential rebels.

However Johnson is still in danger in the short and medium term. In the first instance he will have to survive the Gray report, which is expected to be highly critical of a party and drinking culture in Number 10.

But the greater risk for Johnson is that whatever Gray concludes about the prime minister’s previous knowledge of a “bring your own booze” party in the garden of 10 Downing Street in May 2020.

Dominic Cummings, Johnson’s former senior adviser, has insisted that Johnson was warned in advance that it would break lockdown rules; Gray has interviewed Cummings as part of her inquiry.

Given that Johnson denied in the House of Commons that he was warned about the nature of the party, any suggestion that he lied to MPs would be highly damaging. Johnson said he “believed implicitly” it was a work event.

One Conservative backbencher told the Financial Times that the publication of the Sue Gray report would likely prove to be a tipping point. “Many people have already made up their minds and are just holding out for the report”.