Boris Johnson’s Downing Street party sorrow was the bread in his apology sandwich. But excuses and blame-shifting were the meat. We decode what he said… and what he didn’t

Boris Johnson appears to be reassured by Liz Truss after PMQs

Boris Johnson today apologised for spending 25 minutes at a ‘BYOB’ drinks bash in the No10 garden – while outdoor gatherings were banned in England.

But his half-hearted apology has sparked ridicule as observers and Tory MPs question his claim that he thought it was a work meeting.

At the time of writing four top Tories have directly called for the “dead man walking” Prime Minister to resign – including Scottish Conservatives leader Douglas Ross.

Defence lawyer Raj Chada said the Prime Minister’s account would be “laughed out of court”, if police decided to investigate the gathering on 20 May 2020.

No10 refused to say if the Prime Minister took legal advice on the wording of his statement to Parliament today, or on his claim it was a work meeting.

Mr Chada, the head of the criminal defence department at Hodge Jones and Allen, said: “If any client had tried to use this, it would have been laughed out of court.

“The cross examination would have been brutal: do civil servants/politicians normally ‘bring a bottle’ to work events?

“I cannot see that his defence has any legal basis as you were meant to be working from home if you could.”

Adam Wagner, a human rights barrister, said the Prime Minister’s statement was “obviously lawyered” and “very much about his personal liability.”

In a series of posts on Twitter, he said: “He said that he attended because he “believed implicitly that this was a work event”, that “with hindsight” he should have sent everyone back inside, and “technically” it could be said to fall within the guidance.

“This is very much about his personal liability – he is implicitly denying he knew what the event was, had seen the email or had anything to do with it.”

We’ve looked at Boris Johnson said, what he didn’t – and the layers of meaning in between.

I want to apologise. I know that millions of people across this country have made extraordinary sacrifices over the last 18 months. I know the anguish that they have been through, unable to mourn their relatives and unable to live their lives as they want or to do the things they love.

The Prime Minister starts with what sounds like an unqualified apology. He had to, to stop an all-out revolt from his MPs, who privately argued he must “take his medicine” and show contrition to the public – something he is not used to doing. He also nodded to heartbreaking stories, including from MPs who broke down in tears, of people who couldn’t be with loved ones as they died alone.

I know the rage they feel with me and with the Government I lead when they think that in Downing Street itself the rules are not being properly followed by the people who make the rules.

The word “rage” is unusually strong and accepts anger has been building – with a poll finding two-thirds of voters want him to resign, even 42% of those who voted Tory in 2019. This statement could also cover the many other accusations of government lockdown breaches – dating right back to Dominic Cummings ’ trip to Barnard Castle.

Though I cannot anticipate the conclusions of the current inquiry…

This is where he starts to add the excuses. Mr Johnson is using the inquiry into at least six parties by Whitehall enforcer Sue Gray as a shield to avoid answering further questions. His Press Secretary refused to deny Mr Johnson drank at, made a speech at, or brought a bottle to the ‘BYOB’ bash.

… I have learned enough to know that there were things that we simply did not get right, and I must take responsibility. No. 10 is a big department, with the garden as an extension of the office, which has been in constant use because of the role of fresh air in stopping the virus.

Mr Johnson here switches from “I” to “we” – and shifts the blame onto his staff, talking about his “big department”. His Press Secretary later claimed the Prime Minister neither received nor saw an e-mail from top aide Martin Reynolds inviting more than 100 staff to the outdoor event – while outdoor gatherings were banned. Yet how, otherwise, did he know it was happening? We don’t know. And Martin Reynolds remains in his job and has the Prime Minister’s “full confidence”.

When I went into that garden just after 6pm on 20 May 2020, to thank groups of staff before going back into my office 25 minutes later to continue working, I believed implicitly that this was a work event.

The claim he “believed implicitly that this was a work event” is carefully worded and sounds like an excuse that could be given to police. It’s also likely his excuse to Sue Gray. But it’s also the most inconceivable part of his defence. Keir Starmer said it is “so ridiculous it is actually offensive”. And the fact he was there for 25 minutes makes things so much worse. When did the PM clock that a garden party with booze and food on long tables wasn’t a work event? No10 wouldn’t say. No10 also wouldn’t deny he “lied” when previously claiming he broke no rules.

This raises more questions. Why was he deciding to “thank” staff at a party? How planned was it? When did he clock it was the wrong thing? No10 deny he had any hand in arranging it, but refused to say how he found out it happened – or what he meant by this statement.

I should have recognised that even if it could be said technically to fall within the guidance, there would be millions and millions of people who simply would not see it that way – people who suffered terribly, people who were forbidden from meeting loved ones at all, inside or outside – and to them, and to this House, I offer my heartfelt apologies.

The Prime Minister here returns to unqualified apologies and again references the plight of “millions” of Brits who kept to the rules. But by this point it’s too late – if his apologies are the bread of the sandwich, his excuses are the meat.

All I ask is that Sue Gray be allowed to complete her inquiry into that day and several others, so that the full facts can be established. I will of course come back to this House and make a statement.

This allows No10 to put off further questions about his conduct for weeks until the political heat calms down. Sue Gray is not tipped to finish her inquiry until the tail end of next week or later, and if police decide to investigate, her probe will be paused, likely for months. So while the PM has promised a further statement, in all likelihood he’d have to answer questions regardless, and it will be too late to have an impact on events now. 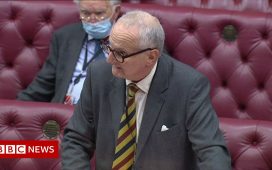