BORIS Johnson secured his landmark Christmas Eve Brexit deal hours after telling Brussels: “I won’t sign it — I won’t” in a massive row about taxes.

The livid PM warned the EU its demands to slap trade tariffs on Britain if we did not let them fish our waters forever was a deal breaker.

A source told The Sun: “The PM was ready to walk at that point.

“We were writing a script trying to explain to the world we had blown up a £660billion deal over less than a billion quid of fish.”

Mr Johnson’s hardline stance saw Brussels blink on the demand late on Tuesday, with the EU asking for a long transition for their fishing boats “as cover” for their climbdown.

An insider said: “It meant we could take back control of our waters as we promised at the 2016 referendum. The PM stared them down and it worked.”

Mr Johnson says his deal is “glad tidings of great joy” for Britain as we will be unshackled from 40 years of Brussels control. Brandishing a copy of the 1,260-page zero-tariff, zero-quota agreement signed with Brussels at 2.44pm on Thursday, the PM quipped: “I have a small present for anyone who may be looking for something to read in that sleepy post-Christmas lunch moment.” In all, 200 officials — including EU chief negotiator Michel Barnier — spent more than 2,000 hours haggling over details on everything from electric car batteries to mackerel.

But during one of the tensest moments of the talks, Mr Johnson’s phone line with Brussels seemed to have gone dead.

The PM hit back: “Five” — then heard nothing. There was almost three minutes of silence before the No10 switchboard operator told him: “I’m sorry PM, we seem to have lost the European Commission.”

Insiders say that was the moment that unlocked the talks and let Mr Johnson — wearing his fish tie — declare that Brexit Britain will be back in “control of our destiny” and our waters on January 1.

Brussels diplomats met yesterday morning to rubber-stamp the deal that will go to MPs on Wednesday.

But ministers were suspicious last night they still had not been shown the full text of the accord.

What’s in the deal

THE full text is yet to be released but both sides have lifted the lid on the contents of the historic accord — which runs to 1,260 pages.

Planes, trains and roads will largely be unaffected by the agreement but there will be noticeable differences elsewhere from next year:

IMMIGRATION: EU citizens will no longer have the automatic right to move to the UK.

Instead they must apply under our new points-based system like the rest of the world.

UK travellers will need a visa if they intend to spend more than 90 days a year in the EU.

GOODS: THE first zero-tariff, zero-quota deal signed by the EU with a third country will allow unlimited goods to continue flowing freely from Britain to the Continent and back.

There are protections for Stilton and Champagne plus approval to carry on shipping animal products.

TRADE: The UK will finally be free to strike deals with countries like the United States.

The deal will also give some protection to our gigantic financial services industry.

LEVEL PLAYING FIELD: A sticking point was whether Brexit Britain could undercut the EU by being more competitive. But it seems the PM saw off attempts to bind the UK to EU rules forever or face its tariffs.

Both sides will be able to retaliate if one of their sectors is being hampered by the other.

But the devil will be in the detail of how, and what the new joint body to oversee this will look like.

EU judges will have no overseer role involving UK law.

FISH: EU boats are allowed to carry on fishing UK waters at current rates for another 5½ years.

After that there will be a 25 per cent reduction in EU quotas, meaning the UK will fish two thirds of British waters by 2026.

The PM promised to spend £100million getting coastal communities ready for big hauls.

SECURITY: The UK will no longer be part of the European Arrest Warrant and is locked out of live access to EU databases. But Brits say cross-border cooperation will continue.

One told The Sun: “It feels like it’s hiding a very big ‘but’.” The accord is due to be published in full this morning. Mr Johnson hopes the compromise on fishing, which means another half-decade before we get control of our waters, will not halt MP approval.

He said in a Christmas message: “This is the feast, full of fish by the way.” Fishing industry figures have already accused Mr Johnson of “sacrificing” them.

But the PM said the deal brings “certainty to business, travellers and all the investors in our country — and a happy, successful and stable partnership with our friends in the EU for years to come.”

And in a major boost for the PM, Priti Patel tells The Sun today that the deal works for Eurosceptics and will keep the country safe.

Home Secretary Ms Patel was among Tories never to back down in 2019 amid claims then-MP Theresa May was selling Britain short.

Police chiefs have raised concerns about the loss of the European Arrest Warrant and being locked out of crime databases.

YESTERDAY: Sporting Christmas jumpers, diplomats from the remaining 27 EU countries met to begin rubber stamping the new trade deal. None was expected to veto the deal — not even France.

NEXT WEEK: Brit MPs will be recalled to Parliament on December 30 to pass the laws needed for the deal to come into effect. Downing Street is confident they it can pass through both Houses in one day.

NEW YEAR’S LEAVE: Britain will formally leave the transition period at 11pm on December 31 — and the new trading relationship with Brussels and other countries around the world can formally begin.

NEXT MONTH: Euro MPs are furious they have to wait until January to sign off on the deal as time ran out this year for them to have a say.

Labour is likely to back the deal despite leader Sir Keir Starmer being the architect of party efforts to frustrate Brexit. He said: “At a moment of such national significance, it is not credible for Labour to be on the sidelines. That is why I can say today that when this deal comes before Parliament, Labour will accept it and vote for it.”

Remainers warned him that doing so would be a mistake and Labour bosses fear a number of frontbench resignations next week.

Sir Keir also courted controversy after hinting he could rip up the deal if he wins power in 2024. 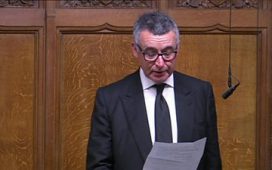 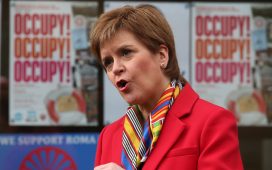