Boris Johnson has refused to rule out delaying the end of Covid restrictions by more than four weeks.

The Prime Minister would not be drawn on his plans today ahead of a press conference tomorrow night – where he is expected to put back step four of his roadmap for England.

It had also hoped to remove all legal restrictions, with a review on social distancing and another on Covid passports due for publication.

But step four is widely expected to be delayed by four weeks to July 19 after the Indian ‘Delta’ variant fuelled a surge – with cases up 52% and hospitalisations up 15% in a week.

Mr Johnson was today asked repeatedly about the lockdown easing, including whether he could eventually delay the final date by more than four weeks.

But he told journalists at the G7 summit: “The right time to fill everybody in on what we’re going to do with step for with June 21 is tomorrow.

“That’s when we’ll be putting out the whole package of information so everyone can see it together.”

The PM added: “We don’t want to get it out in dribs and drabs”.

Tory backbenchers piled pressure on the PM to stick to the original timetable – as Tory ministers voiced fears that England could see Covid restrictions until Spring 2022.

“Once you start delaying to the spring, you’re making this type of control of people’s lives semi-permanent.”

But A string of government advisors today predicted a delay of up to four weeks to step four to July 19.

One, Dr Raghib Ali of Cambridge university’s Epidemiology Unit said a delay to June 21 was “inevitable”.

Dr Ali believed “a four-week delay would be optimal”, adding: “What I expect the PM to say is based on that data, unfortunately a delay is needed to make sure we don’t get to the situation again where the NHS is unable to provide care to all its patents.”

Foreign Secretary Dominic Raab signalled the June 21 easing would indeed be delayed – stressing the change was always meant to be “no earlier than June 21”.

The top Tory confirmed ministers are “racing” to get more people double-jabbed before opening up.

Crucially Mr Raab suggested Brits need to “sever” the link between cases and hospital admissions – “not just weaken it”.

This appeared to be a major shift from the government’s “four tests”, which only said cases should not “risk a surge in hospitalisations which would put unsustainable pressure on the NHS.”

But Downing Street rowed back today, telling journalists: “We have the four tests and those have not changed.”

Foreign Secretary Mr Raab told the BBC’s Andrew Marr Show: “The race we’re in is to get everyone up as far as we possibly can to two doses.

“Because that maximises the effectiveness both of risk of serious harm to people, but also we know it’s more effective at cutting the transmission.

“So I think it is right to characterise that as the test.

“The question is what the evidence says about whether we’ve broken the link – severed the link, not just weakened it – between transmission and hospitalisation.”

He added: “We want to move out of lockdown irreversibly and that means we have to be very careful about that data.”

Boris Johnson had tried to bring forward his press conference as he wanted to avoid clashing with England’s Euro 2020 debut against Croatia – without causing a diplomatic incident.

The PM’s aides had strained to avoid clashing with the 2pm kick-off time but were hemmed in by protocol. By tradition the host nation of the G7 has their press conference first – and talks in Cornwall broke up just before 2pm.

But in the end the Prime Minister walked on stage just after past 2pm after efforts to bring his statement forward were not successful.

He joked: “I’m sorry to hear that due to their pre-existing commitments, the England football team are not able to watch this press conference in the way I’m sure they would like.

“But I hope that following their resounding victory they will be able to catch up on the triumphs of the G7 later on.”

The PM also said “everybody should cheer for England” after some fans booed players taking the knee today.

But he refused to say if he personally would take the knee if he was called up to play for England.

“I live in hope but I think my greatest fans can see that’s not going to happen,” said the Prime Minister at the G7 summit.

The PM – who’s repeatedly dodged questions about whether he would take the knee – claimed it was “one of the most implausible hypotheses yet constructed of all the hypothetical questions thrown my way.”

It came as a UK-EU battle over trading rules between Britain and Northern Ireland descended into bitter barbs.

French President Emmanuel Macron was accused of suggesting Northern Ireland was not part of the UK in a private meeting with Boris Johnson.

UK’s Foreign Secretary Dominic Raab branded the comments “offensive”, accused the EU of a “lopsided, purist” approach to trade checks that breaks the Good Friday peace agreement, and demanded “a bit of respect”.

Yet Boris Johnson – who refused to comment in detail today, claiming Brexit only “occupied a vestigial, vanishingly small proportion of our deliberations” – himself approved the rules he’s now fighting against as part of his 2019 Brexit deal.

See also  Hong Kong: what is the Lamcao movement?

A ‘sausage war’ has broken out between Boris Johnson and EU leaders after Brussels refused to budge on trading rules in the 2019 Northern Ireland Protocol.

This was designed to avoid a damaging “hard border” between Northern Ireland and the Republic – but has instead created a border in the Irish Sea, angering Loyalists and leading to threats against port staff.

EU rules also mean there will be a total ban on British “chilled meat preparations”, including sausages, travelling from Britain to Belfast once a grace period expires on June 30.

No10 insisted “numbers were below 30” at the gathering last night, despite footage appearing to show around 40 people in the area including security and waiting staff.

Most outdoor social gatherings are still limited to 30 people in England under step three of the Prime Minister’s roadmap.

Step four was due to remove that limit from June 21. But tomorrow night the PM is expected to announce that date has been delayed by up to four weeks.

Press were banned from the private barbecue last night, part of the G7 summit in Cornwall, and the only photos came from No10’s own photographers.

But the BBC caught long-lens footage of the shindig, where world leaders watched a Red Arrows flypast before drinking buttered rum, toasting marshmallows on a fire pit and listening to sea shanties.

Boris Johnson’s spokesman said: “The event last night was done in an entirely Covid-secure way within the existing rules.

“Those attending the summit had a daily testing regime and the event was held outside.

“This was an informal gathering of the G7 leaders and rightly it is held in private … but you can see it was a relaxed atmosphere and gave the leaders a chance to discuss outside of a formal setting.” 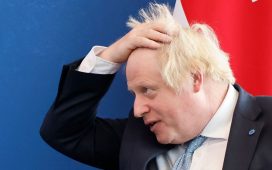 Roll up, roll up: UK circus offers vaccine as take-up slows in under-25s

SAS on hunt for female soldiers to join top-secret operations