BORIS Johnson has pledged to recruit 50,000 more nurses and set 50million extra GP surgery appointments a year in his blockbuster blueprint for Britain.

The PM will turbocharge our ailing NHS by spending £759m on nurse recruiting and training in his first year at No10 alone.

He will plunge a further £399m into creating more appointments for Brits in the same year, his manifesto pledges.

There will also be the return of the student nurse bursary – between £5k-£8k for all – which was previously cut by the Tories.

Mr Johnson said his blueprint was a “radical agenda” and if he gets to No10 by 2023 the NHS would see a 29 per cent increase in spending.

He added: “We will be investing the biggest ever cash boost into the NHS.”

Mr Johnson has spent much of his time in office on a policy blitz with a particular emphasis on turbocharging the NHS – with a £13bn funding pledge.

In September he vowed to breathe life into our ailing health service with 40 hospitals – many in Leave areas – earmarked for a revamp.

He promised money for “the biggest programme of hospital building in a generation” which will come from the billions saved in EU contributions after Brexit.

Part of the package is £200m to replace ageing MRI, CT and breast cancer scanners.

Separately, Mr Johnson will also give scientists £200m to develop treatments for cancer, dementia and other illnesses.

It will allow science companies to scale up and expand by commercialising their discoveries.

The Tories have also promised to ensure parking is free at hospitals – so that patients and their loved ones don’t have to worry about mounting penalties as they get treatment.

In an effort to add to the ranks of the NHS, visas for nurses will be halved in cost and fast-tracked under new immigration plans.

The “NHS visa” will be part of his blueprint for a points-based immigration system after Britain leaves the EU – designed to adapt to the changing needs of the UK economy.

Under the scheme, the cost of a visa for health professionals would be halved from £928 to £464, while applicants would be guaranteed a decision within two weeks.

Applicants coming to work in the NHS would receive preferential treatment with extra points under the points-based system, and no cap on numbers entering through the NHS route.

They would also be able to pay back the cost of the immigration health surcharge through their salary if the charge is not already covered by the NHS trust offering the job. 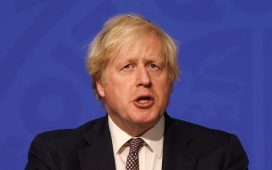