BORIS Johnson and Rishi Sunak met for crisis talks on the cost of living yesterday to plot slashing VAT on energy bills.

Despite publicly talking down the prospects of a cut, The Sun can reveal it is high up on a list of possible fixes to lessen the blow of soaring bills this spring.

The PM and Chancellor held meetings with officials following a private dinner on Sunday evening where they agreed to take significant steps to reduced energy bills for struggling Brits.

Last week Mr Johnson seemed to rule out a VAT reductions on energy bills that are set to soar to £2,000 for the average household when the price cap is adjusted in April.

But he previously backed using the freedom of Brexit to remove the 5 per cent levy on energy bills saying it hit the poorest hardest.

The pair also discussed helping energy firms with cheap loans to spread the cost of the hike – due to soaring wholesale prices – over five years.

And a suspension of green levies on gas bills was also on the table at the talks.

Amid the soaring cost of living crisis, Downing Street and Labour joined forces to urge Parliamentary bosses not to hike MPs pay this year fearing a massive public backlash.

Backbenchers are now bracing for a salary freeze after The Sun revealed they were in line for a 2.7 per cent bump on the same day families face a triple-whammy whack to their wallets.

On April 1 ordinary Brits will be slapped with soaring National Insurance Contributions, heating bills and council tax – while a million extra taxpayers will be dragged into the higher rate.

Heading off the looming PR disaster, No10 yesterday raced out of the blocks to warn against MPs swelling their pockets, saying the PM “would expect restraint on matters like this, given the current circumstances.”

Sir Keir Starmer quickly followed to advocate their salaries were frozen at the current £81,932, where it’s sat since April 2020, saying “it shouldn’t go ahead.”
IPSA, the body that regulates MPs pay and expenses, is due to make a decision on the pay hike imminently.

But last night Commons sources said it was increasingly unlikely after such a forceful rejection from the PM and Sir Keir. 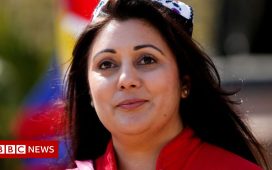