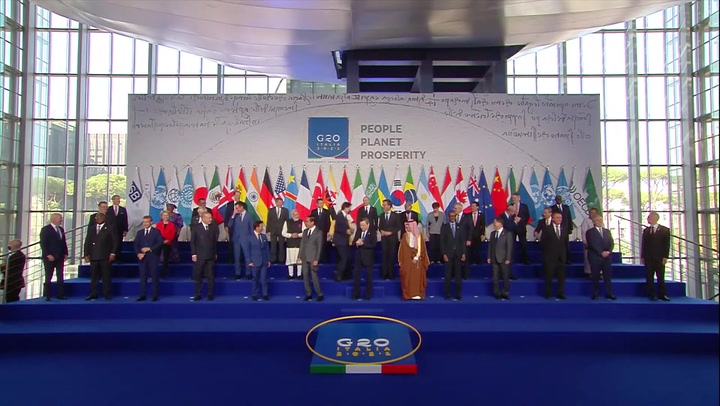 G20: Macron and Johnson greet each other at summit

Boris Johnson and Emmanuel Macron came face to face at the G20 summit amid rising tensions over fishing.

The pair reportedly shared a ‘mock combative fist-bump’ as world leaders gathered for the ‘family photo’ at the summit in Rome.

Mr Johnson today threatened to trigger a legal battle by the end of the week over fishing rights in the Channel.

The Prime Minister warned France “might” have breached the UK’s post-Brexit trade deal with the EU after a British trawler was seized in Le Havre.

And today he announced “I don’t rule out” triggering the dispute mechanism under the Trade and Co-Operation Agreement in the next seven days.

That would see the UK and EU embark on a torturous process which could lead to formal talks, arbitration, a tribunal ruling and even compensation.

Asked on Saturday morning if he could rule out triggering the mechanism “next week”, Mr Johnson told Sky News: “No, of course not. I don’t rule that out.”

The PM admitted the relationship had hit “turbulence” – which could reach fever pitch tomorrow when he comes face-to-face with the French President at the G20 summit in Rome.

He’s is due to have an informal “brush-by” meeting with Mr Macron during the summit.

It comes after French president Emmanuel Macron, in an interview with the Financial Times, accused the UK of not keeping its Brexit pledges on fishing as he said London lacked “credibility”.

France is threatening to block British boats from its ports and tighten checks on vessels if an issue over a lack of licences for small French vessels to fish in British waters is not resolved by Tuesday.

Mr Castex urged the EU to use the “levers at its disposal” to press home the need for “compliance” with the Brexit agreement on fishing and to show that “leaving the Union is more damaging than remaining in it”.

But Jean-Marc Puissesseau, president and chairman of the ports of Calais and Boulogne-sur-Mer, described the argument as “ridiculous” as he urged both sides to dial down talk of threats and retaliation.

He insisted the UK was working with the French government to issue more fishing licences for French boats.

He added some comments by the French were “not appropriate” and suggested it was the wrong time to stoke a row during tense talks on climate.

“We very much feel we have bigger fish to fry,” he said.

The PM’s spokesman added: “He doesn’t want to be distracted from the important work of tackling climate change”.

But he still insisted there were “benefits to the British public” of Brexit, including tax changes in the Budget and the speed of the vaccine rollout.