In a room in the intensive therapy unit of a hospital in the port city of Rijeka, Croatia, Farouk fights for his life.

The 18-year-old Afghan has life-threatening injuries to his thorax and abdomen. On 16 November, in the woods around Tuhobić, a Croatian police officer shot Farouk – who, with dozens of other migrants, was attempting to cross the border with Slovenia.

The police claimed the officer unintentionally fired a single gunshot. But four eyewitnesses interviewed by the Guardian said they believed Farouk was deliberately shot and that his travel companions were threatened by other officers that they would receive the same fate if they tried to cross the border again.

News of the shooting has reached the migrant camp of Vučjak, in Bosnia, 200km away. The heavy snowfall in recent weeks has made the lives of the 600 migrants living there intolerable. The majority arrived in Bosnia through Turkey, hoping to travel through Croatia to reach Slovenia, before heading to Italy, Austria or Germany.

Each night, groups of up to 80 people attempt to cross from Bosnia into Croatia, where squadrons of police await them at the border. Armed with truncheons, pistols and night vision goggles, they patrol the EU’s longest external border. Asylum seekers call crossing the border “the game”, but there is nothing fun about it.

In one of the tents in the Vučjak camp, Asmad, 16, asks if Farouk is still alive. He has heard nothing about him since 16 November.

Asmad was with Farouk the night he was shot.

“There were 60 people … that night when the Croatian police spotted us,” says Asmad. “The Croatian commando threw us on to the floor and then beat us. So around 20 of us ran fast ahead. One was shot. Farouk. He cried out: ‘I’ve been shot! I’ve been shot!’”

Four of the group of 20 managed to get away, but were eventually apprehended by the Croatian police.

“We got caught by the police, who returned us to the [Bosnian] border,” says Asmad. “When we came back that way, we saw that guy’s [Farouk’s] blood on the ground. His bag was still there. We still don’t even know where he is, and we know nothing about the other friends who disappeared that night. We still don’t know where they are. The police took us back [to] the border point and the commandos were standing there as we were walking on the road. That’s when they beat us, one by one. I’ll never forget the blood I saw on the ground. I can still remember it. We were thinking: ‘What have they done?’”

Croatian police have told the media that “one person among a group of 16 migrants’’ stopped that night was seriously wounded.

Croatian interior minister Davor Božinović told the media: “What I could possibly say at this point is that it has not been established that the use of the firearm was directed at a specific person with the intention of acting against a person.”

But three other people with Farouk that night told the Guardian they believed the shooting was no accident.

“We were running,” says Pakir, 16, from Vučjak camp, “and we saw him being shot. I saw his body lying on the ground.”

“There was not just one shot,” says Zarif, 19. “There were several shots. If you unintentionally shoot someone, you fire one shot, not many and not all at the same person.”

This not the first time the Croatian police have been accused. Aid workers, doctors, border guards and UN officials have documented the systematic abuse and violence perpetrated by police, with migrants often beaten, robbed and even stripped of their clothes.

On 28 November, another migrant was shot by a Croatian police officer in western Croatia. The police claimed he was accidentally shot while resisting arrest.

Earlier in the year Croatia’s public ombudswoman, Lora Vidović, received an anonymous letter from a person claiming to be a Croatian border police officer, which detailed the use of brutal force against migrants. The letter alleged that the Croatian police had received orders to carry out pushbacks without checking ID documents, to take migrants’ money and destroy their phones.

“I have been engaged on protection of the state border for a while,” said the letter. “I have no more will nor power to look at what is being done to these humans.”

Back in Vučjak, as winter takes hold, none of the four witnesses have attempted to cross the border again.

Asmad sits in the tent, wrapped in four wool blankets. Outside his tent it is -5C.

“There is no heating, no electricity, the situation is very bad,” says Annika Holgersson, a doctor with Médecins Sans Frontières in Vučjak. “And migrants suffer a lot from the conditions in the camps. We see a lot of infections, wounds, pneumonia and coughing. In normal life they wouldn’t get a common cold every other week, so we see a lot of infections which are hard to defeat because of the poor conditions they live in.”

Instead of waiting for spring in the camp, some people have travelled to the city of Tuzla, north-east Bosnia, in search of a warm meal and a roof.

But others are still risking the journey north.

A group of six Afghans set off, moving in a straight line, crouching, careful where they place their feet. The area around Vučjak is littered with unexploded landmines. The snow makes it difficult to see the ground. They wear camouflage jackets. Some still bear the wounds of an alleged recent beating at the hands of the Croatian police. Broken teeth, truncheon wounds on their shoulders, shins slashed by the teeth of police dogs.

“Stop with these abuses,” says Semra Okanović, a doctor in Velika Kladuša, a town near the Croatian border. “Why are they doing this? These people are humans but they treat them like animals.”

According to an article published in Italian magazine L’Espresso, Zagreb has received €100m (£85m) from the EU to modernise their borders in anticipation of Croatia’s admittance to the Schengen zone, which is expected to be formalised in the coming months. Aid workers and officials contend this money is being used to carry out human rights violations.

In July this year, Croatia’s president, Kolinda Grabar-Kitarović, admitted that “a little bit of force is needed when doing pushbacks”.

Last week, the news of two Nigerian student tennis table players, wrongly deported to Bosnia by Croatian police who mistook them for undocumented migrants, sparked a row between Zagreb and Sarajevo.

The hospital in Rijeka says Farouk is stable.

But Lovorka Šošic, communication coordinator for the Centre for Peace Studies, a Croatian NGO promoting non-violence, says his injuries could “permanently impact his life”. He says the ministry of interior had failed to properly investigate the shooting, and said the anonymous letter received earlier in the year had had little impact.

“These testimonies of anonymous police officers confirm all the reports written by national and international organisations,” says Šošic. “It is rather clear that operations conducted by the ministry of interior do not comply with national and international law. Systematic covering up of unlawful practices conducted by Croatian police officers and the approval of the usage of weapons without any effective investigations proves that ‘incidents’ such as the one that happened last month are not isolated events, but rather a result of orders coming from the top.”

Croatia’s national police said the county state attorney’s office in Rijeka is conducting an investigation into the incident, so was unable to comment further on the case.

But a spokesperson added: “The fact is that a large number of individuals move along a number of countries on the so-called Balkan route without identity documents and without any problems. The fact is that, due to its complex and inefficient system lacking staff and equipment, Bosnia and Herzegovina is failing to protect its eastern border, as well as its western border with Croatia.

“As a full member of the European Union, Croatia has an obligation to protect its own border, which is at the same time the external border of the EU. Croatia is doing this, both on its eastern and western borders.”

Due to the cold and the dire conditions, Vučjak camp has been closed. 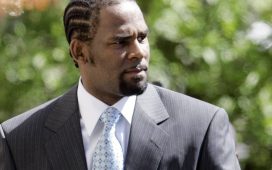 ‘I was praying: don’t let anybody kill me’ – Oleksandr Usyk on life in Ukrainian army 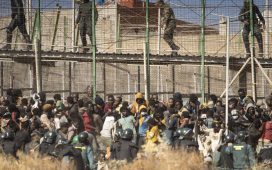 Europe to see ‘high levels’ of Covid-19 this summer, WHO says 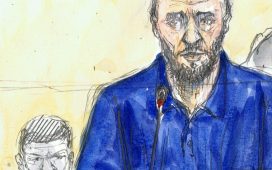 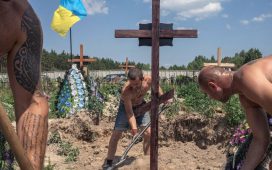 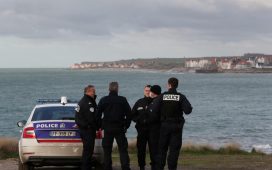