Black health care workers were less likely than their white colleagues to receive the COVID-19 vaccine in the early months of the jab’s availability, a new study finds.

Researchers at the University of Pennsylvania gathered data from the school’s teaching hospital in Philadelphia.

They found that, in the first four months of the shot’s rollout – from December 2020 to March 2021 – black employees were 30 percent less likely to receive their first vaccine dose than white health care workers.

The racial gap was made up of nurses and other frontline health workers, though black physicians had higher vaccine rates than their white counterparts.

Black health care (yellow line) workers were significantly less likely to receive the first dose of the Covid vaccine in the first four months of the shot’s availability. Researchers found that more than 80% of white (dark blue line) or Asian (light blue line) workers received the shot, compared to less than 60 percent of black employees

Researchers, who published their findings on Wednesday in JAMA Network Open, gathered data from the 12,610 employees who work at the hospital.

The Pfizer-BioNTech COVID-19 vaccine was first given emergency use authorization in mid-December 2020.

Health care workers were among those first eligible for the vaccine, and every employee at the hospital had the opportunity to get the shot in the first four months if they wanted.

Overall, 9,573, or 76 percent, received at least the first dose of the Pfizer vaccine during the study period.

The research team split the study population across races and the position someone served at the hospital. 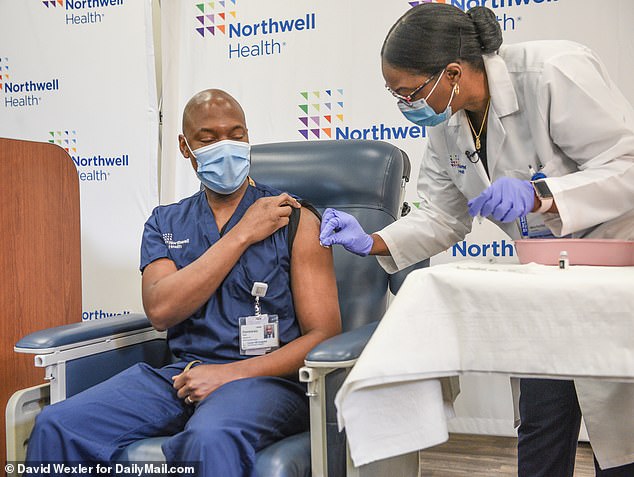 Black Americans have the lowest vaccination rate of any racial group in America, with only 40% having received one shot of the vaccine and 30% fully vaccinated. Pictured: A New York City doctor receives a shot of a COVID-19 vaccine on December 14, 2020

Researchers found that Asian and white health care workers were most likely to have received the vaccine in the first four months – with more than 80 percent of each group getting the shot.

Almost 80 percent of Hispanic health care workers also had received their first jab in the opening months of the rollout.

Mixed race and black health care workers suffered a huge drop when compared to their peers, though.

When compared directly to their white peers, the research team found that a black employee at the hospital was only 69 percent as likely to have received the shot.

There was also a massive disparity in vaccination rates depending on a person’s position in the hospital.

Nearly every single black physician at the hospital had received the shot, more than even the white physicians, whose vaccination rate was around 90 percent.

Other black employees at the hospital dragged the category behind, however. 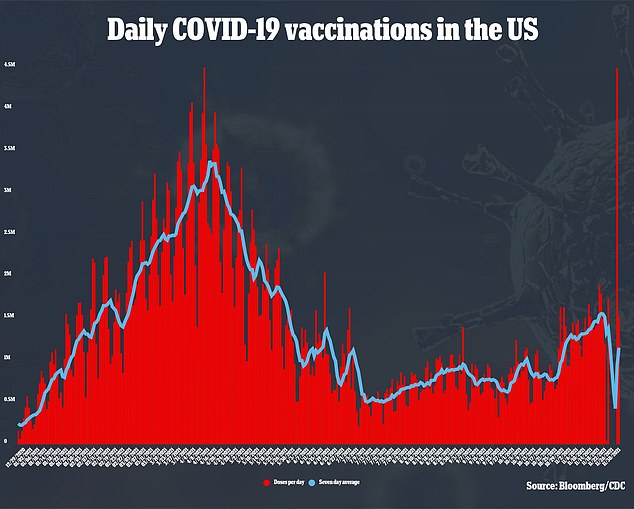 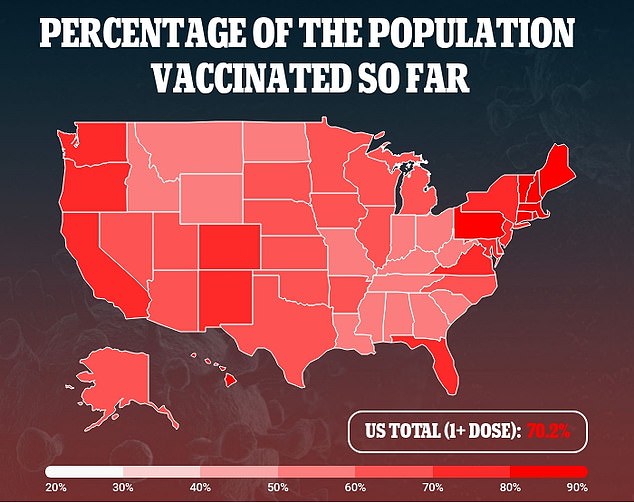 Just over 60 percent of black nurses had received the shot at that point, compared to around 90 percent of white nurses.

Around 50 percent of black workers with no patient contact, or non-physician or nurses who have patient contact, received their first shot in the first four months – compared to over 80 percent among the white workers in both categories.

Vaccine hesitancy among black Americans has been one of the stories of the vaccine rollout so far.

Only 40 percent of black Americans have received at least one shot of a COVID-19 vaccine, and 35 percent are fully vaccinated  according to data from the Centers for Disease Control and Prevention – the lowest of any racial group in both categories.

Some blame past racism in American medicine and general distrust of the government by some black people as reason for the disparity.

In the time since the study, the University of Pennsylvania health care system has instituted a vaccine mandate, forcing all employees to get the jab by September 1 in order to keep their jobs.

Blood pressure chart by age: 12 key signs your rate is too high or low

Supplements: The vitamins and minerals ‘people should avoid’ according to a doctor

The Guardian view on recovery: an underrated process | Editorial