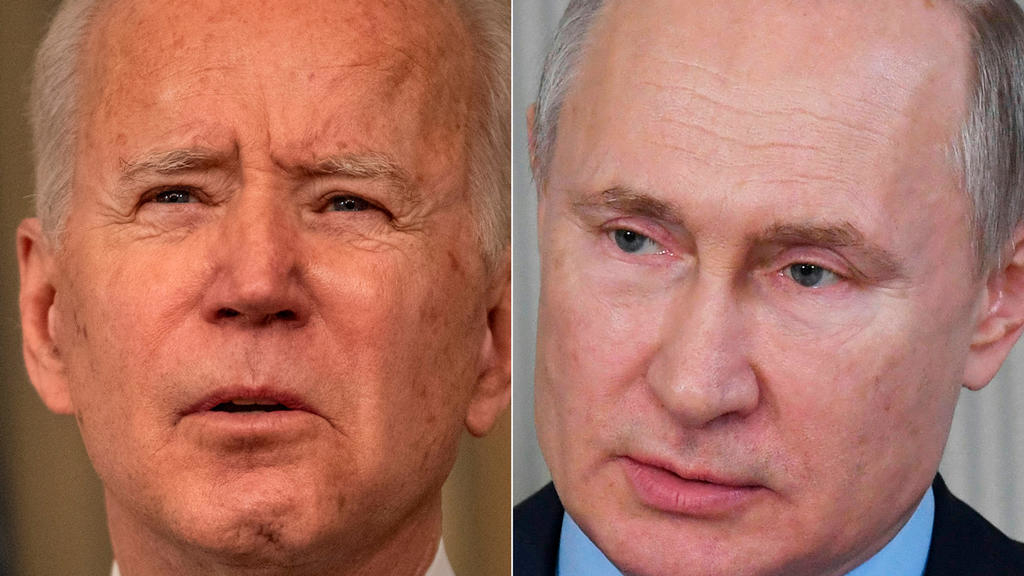 US President Joe Biden told his Russian counterpart Vladimir Putin to ease mounting tensions with neighboring Ukraine Tuesday, joining a pushback against a build-up of troops along their border which has raised alarm among NATO allies.

As a new report from American intelligence said Russia was not seeking direct conflict with the United States, the White House revealed Biden had spoken by phone with Putin to propose a summit between the two leaders at a neutral venue.

The Kremlin said the two men had agreed to “continue dialogue” without saying whether Putin had agreed to what would be their first meeting since Biden came to power.

The Russian buildup at the Ukrainian border has caused mounting alarm in the West in recent days, with the United States saying that troop levels are at their highest since 2014, when war first broke out with Moscow-backed separatists.

Biden “voiced our concerns over the sudden Russian military build-up in occupied Crimea and on Ukraine’s borders, and called on Russia to de-escalate tensions,” the White House said after the phone call.

“President Biden reaffirmed his goal of building a stable and predictable relationship with Russia consistent with US interests, and proposed a summit meeting in a third country in the coming months”, it added in a statement.


In its readout of the call, the Kremlin said “both sides expressed their readiness to continue dialogue on the most important areas of ensuring global security.”

The Kremlin confirmed that the US president had proposed what would be the leaders’ first summit since Biden came to office vowing a tougher line on Russia, including over its alleged interference in US elections and harsh treatment of ailing opposition leader Alexei Navalny.

Putin similarly held a summit in Finland in 2018 with then US president Donald Trump, who caused a furor at home by appearing to accept the Russian leader’s denials of election meddling.

“Russia’s considerable military build-up is unjustified, unexplained and deeply concerning — Russia must end this military build-up in and around Ukraine, stop its provocations and de-escalate immediately,” Stoltenberg said at his meeting with Kuleba.

Russian Defence Minister Sergei Shoigu hit back that Moscow has deployed troops to its western borders for “combat training exercises” in answer to NATO military moves.

“In response to the alliance’s military activities that threaten Russia, we took appropriate measures,” Shoigu said in televised remarks, adding the exercises would be completed within two weeks.

Ukraine — which applied to join NATO in 2008 — is pressing Western powers for “practical” support as it seeks to deter any new aggression from Moscow.

“Russia will not be able to catch anyone by surprise anymore. Ukraine and our friends remain vigilant,” Kuleba said as he met Stoltenberg and Blinken.

Blinken insisted “the US stands firmly behind the sovereignty and the territorial integrity of Ukraine” and said the country’s “Euro-Atlantic aspirations” would be discussed in the alliance.

Some NATO members remain deeply reluctant to heed Ukraine’s appeal to speed up its push for admission as they seek to avoid ratcheting up the tension.

In a new report released Tuesday, the director of US national intelligence said that Russia would “continue destabilization efforts against Ukraine” while concluding that “does not want a direct conflict” with the United States.

The Kremlin has warned NATO off getting further involved in Ukraine and on Tuesday accused the alliance members of turning the country into a “powder keg.”

“If there is any aggravation, we of course will do everything to ensure our security and the safety of our citizens, wherever they are,” Deputy Foreign Minister Sergei Ryabkov was quoted as saying by Russian news agencies.

“But Kiev and its allies in the West will be entirely responsible for the consequences of a hypothetical exacerbation.”

The troop build-up comes amid a spike in violence along the front line between Russian-backed separatists and Ukrainian forces in the east of the country.

Ukraine’s military said that one of its soldiers was killed on Tuesday when a drone dropped grenades on his position, taking to 29 the number of fatalities for Kiev this year.

Fighting subsided in 2020 as a ceasefire agreement took hold last July, but clashes have picked up again since the start of the year, with each side blaming the other.

Analysts say NATO allies are not willing to commit their own forces to a conflict against Moscow over Ukraine, but could bolster other forms of assistance.

“NATO members will not send any boots on-the-ground in Ukraine,” said Bruno Lete, a senior fellow at the German Marshall Fund of the United States think tank.

“Their support will be limited to political messaging, military advice, and technical aid.”

But in a clear sign that Washington is looking to bolster its military backing for European allies, US Defense Secretary Lloyd Austin announced it was sending some 500 new personnel to Germany.