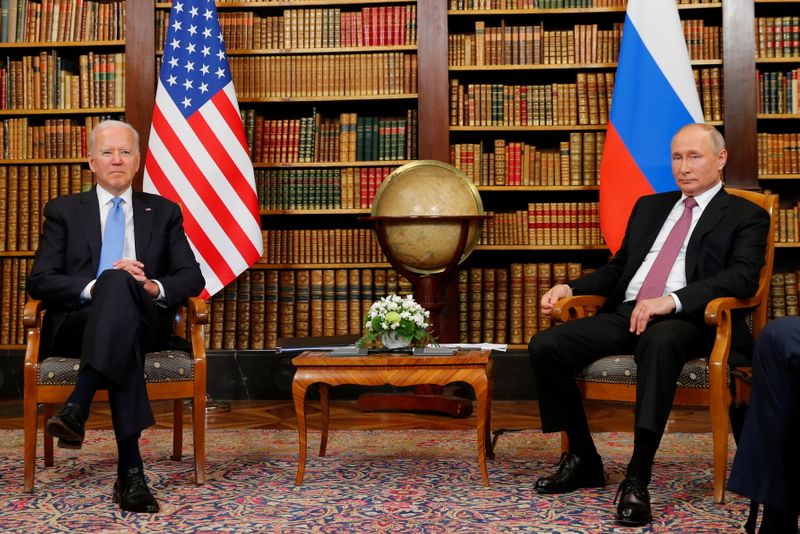 By Steve Holland and Tom Balmforth

Biden wants to discuss U.S. concerns about Russia’s military buildup on the Ukraine border, a U.S. source said on Saturday, as well as strategic stability, cyber and regional issues.

“We’re aware of Russia’s actions for a long time and my expectation is we’re going to have a long discussion with Putin,” Biden told reporters on Friday as he departed for a weekend trip to Camp David. “I don’t accept anybody’s red lines,” he said.

The two will also talk about bilateral ties and the implementation of agreements reached at their Geneva summit in June, the Kremlin said on Saturday.

“The conversation will indeed take place on Tuesday,” Kremlin spokesman Dmitry Peskov told Reuters. “Bilateral relations, of course Ukraine and the realisation of the agreements reached in Geneva are the main (items) on the agenda,” he said.

More than 94,000 Russian troops are massed near Ukraine’s borders. Ukraine Defense Minister Oleksii Reznikov said on Friday https://www.reuters.com/world/europe/large-scale-russian-offensive-possible-january-ukraine-says-2021-12-03 that Moscow may be planning a large-scale military offensive for the end of January, citing intelligence reports.

Biden will reaffirm the United States’ support for the sovereignty and territorial integrity of Ukraine, the U.S. source said. The exact timing of the call was not disclosed. The White House declined to comment.

The U.S. president on Friday said he and his advisers are preparing a comprehensive set of initiatives aimed at deterring Putin from an invasion. He did not give further details, but the Biden administration has discussed partnering with European allies to impose more sanctions on Russia.

Moscow accuses Kyiv of pursuing its own military build-up. It has dismissed as inflammatory suggestions that it is preparing for an attack on its southern neighbor and has defended its right to deploy troops on its own territory as it sees fit.

U.S. officials say they do not know yet what Putin’s intentions are, adding while intelligence points to preparations for a possible invasion of Ukraine, it is unclear whether a final decision to do so has been made.

U.S.-Russia relations have been deteriorating for years, notably with Russia’s 2014 annexation of Crimea from Ukraine, its 2015 intervention in Syria and U.S. intelligence charges of meddling in the 2016 election won by now-former President Donald Trump.

But they have become more volatile in recent months.

The Biden administration has asked Moscow to crack down on ransomware and cyber crime attacks emanating from Russian soil, and in November charged https://www.reuters.com/technology/us-seizes-6-mln-ransom-payments-charge-ukrainian-over-cyberattack-cnn-2021-11-08 a Ukraine national and a Russian in one of the worst ransomware attacks against American targets.

Russia has repeatedly denied carrying out or tolerating cyber attacks.

The two leaders have had one face-to-face meeting since Biden took office in January, sitting down for talks in Geneva last June. They last talked by phone on July 9. Biden relishes direct talks with world leaders, seeing them as a way to lower tensions.

U.S. Secretary of State Antony Blinken warned Russian Foreign Minister ” https://www.reuters.com/world/europe/blinken-urges-russias-lavrov-take-diplomatic-exit-ukraine-crisis-2021-12-02 Sergei Lavrov in Stockholm earlier this week that the United States and its European allies would impose “severe costs and consequences on Russia if it takes further aggressive action against Ukraine.”