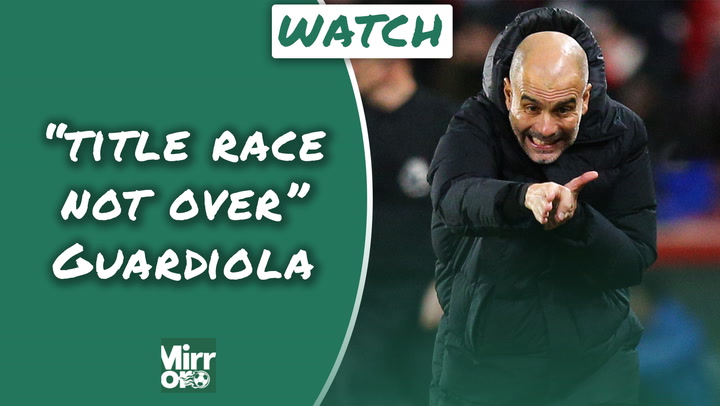 Guardiola refuses to believe title race is over

Manchester City midfielder Bernardo Silva has sung the praises of his manager Pep Guardiola and revealed what makes him one of the best coaches in the world.

Guardiola has guided City to the Premier League summit once again as his side look odds-on favourites to secure what would be their fourth league title in five seasons.

City currently boast a 10-point cushion over their nearest title rivals Chelsea, while third-placed Liverpool are still clinging on having played a game less despite their 11 point disadvantage.

Though many sides struggled to maintain form amid the hectic festive fixture pile-up, it proved to be light work for City’s expensively assembled cast who have now won all of their last seven games in all competitions.

HAVE YOUR SAY! Is Guardiola the best manager of all-time? Comment below

That kind of breath-taking form has left the likes of Chelsea and Liverpool simply hoping City slip up eventually as their own title tilts have taken sufficient damage in the wake of City’s impressive run.

Few manager’s have enjoyed the kind of dominance Guardiola could claim to have were he to inspire his troops to a fourth league title in five seasons.

Silva has undoubtedly been one of City’s best performers this season as the Portugal international has registered seven goals and one assist from midfield so far this term.

The 27-year-old is clearly loving life under Guardiola while rumours of a potential Etihad exit for the midfielder now feel like little more than a distant memory.

Silva has opened up on what he feels Guardiola’s strengths are and how the former Barcelona manager’s human touch has helped get the best out of him as a player.

“I think Guardiola has a bit of everything. He is very complete,” he is reported as saying by A Bola.

“I think Guardiola’s greatest strength is that, apart from having been a player at a very high level, which gives him a perspective of what we feel, his technical side is very strong.”

Silva went on to explain how even a manager with the reputation and honours haul of Guardiola will still struggle to get every player on board.

“Of course, there are always players who don’t like it and others who do, but that’s like everything else. No coach has all 25 players on his side; it’s very difficult,” he added.

“He manages to keep players who cost this much on the bench for so many games, and even then there are no major problems…I think this shows how good he is at managing changing rooms,” Silva said.

Up next for City is the small matter of a home clash against title rivals Chelsea which provides Guardiola’s men with the chance to put even more daylight between the two sides.