And thus we welcome the latest Bentley Flying Spur V8, the third generation of Bentley’s saloon that, with the demise of the Mulsanne, effectively becomes the flagship limo.

Fortunately, we already know it is a much, much better car than either of its previous iterations, which, charged with being both a luxury saloon and a car capable of 200mph or thereabouts, couldn’t do isolation well enough in the face of the physical demands placed upon them. In being fast, they were insufficiently luxurious.

This time, our experience of the early 6.0-litre car means we know it can do both, on account of it being based on the MSB platform developed for the Volkswagen Group (of which Bentley is a part) by Porsche, with heavy and early input from the brands that will use it.

We’ve already found that with vast arrays of active dynamic technology, including rear steer and 48V active anti-roll bars, the 6.0 W12-engined car is deftly sprung and quiet, despite a double-ton top speed and 626bhp. 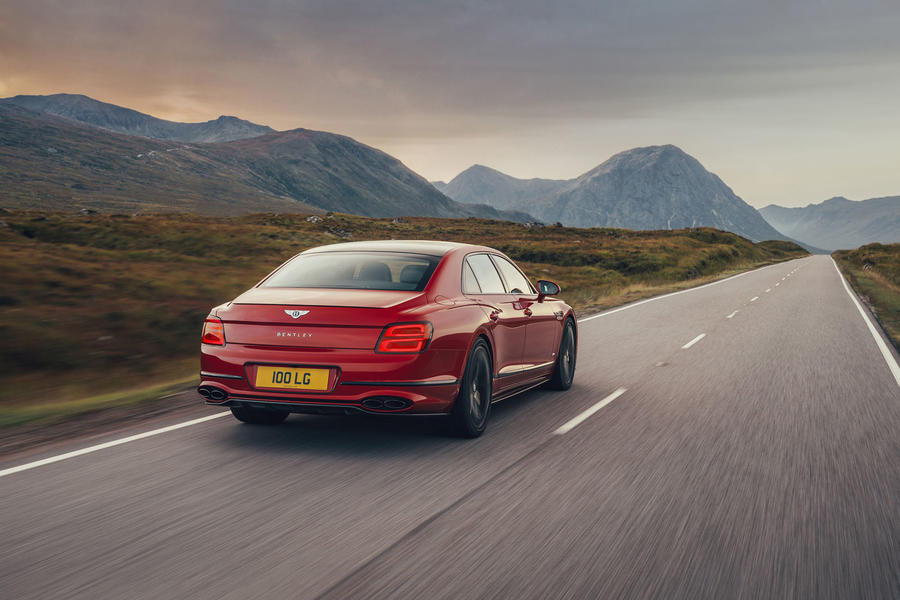 Peak torque arrives at the same 2000rpm as in the W12. There’s very little in it, then, in terms of performance (it’s a not-quite 200mph car rather than an only-just 200mph car) but also, rather more pleasingly, it’s a slightly nicer car to drive.

The noise is muted at low revs, a little V8-ish at high revs, but most of the time you’ll be unaware how many tiny bangs are taking place in front of you. You just have enough power any time you want it. The dual-clutch auto is good, too; perhaps marginally less refined than a full auto in town, but unnoticeably so most of the time.

Speak to vehicle dynamics engineers about their favourite cars in any given range and it’s no surprise to learn that it’s usually the lightest one that they like the most. That’s how, once again, we feel here. The Flying Spur V8 feels just as well isolated and quiet as the bigger-engined alternative, with genuine luxury to its ride quality, albeit not quite as much silence or waft as you’d find in a Rolls-Royce Ghost.