Being overweight or obese increases the risk of getting ANY kind of cancer by 12 percent, study finds

Being overweight or obese increases the risk of several common cancers, a new study finds.

Researchers from Aarhus University Hospital in Denmark found a 12 percent risk associated with being dangerously overweight.

The team says that the rising rates of obesity and severe obesity will increase the rates of cancers across the board, take a toll on healthcare costs and see more people dying prematurely. 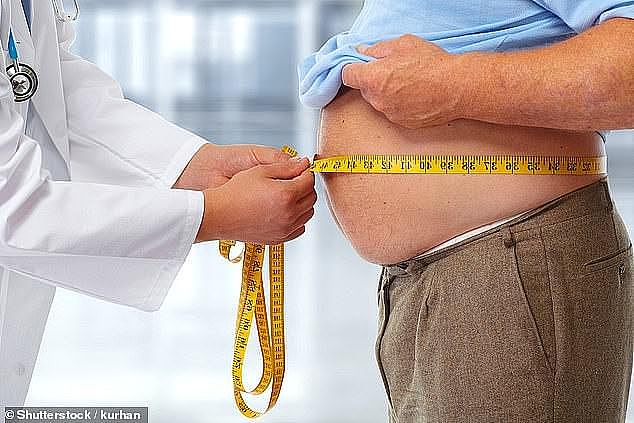 A new study from Aarhus University Hospital in Denmark has found that being overweight or obese increases the risk of all cancers, obesity and non-obesity related, by 12% (file image)

For the study, published in the Journal of Internal Medicine, the team looked at cancer data in Denmark over a 40-year period, from 1977 to 2016.

Researchers found 20,706 cancers among 313,321 adults who were clinically diagnosed as being overweight or obese.

By comparison, there were 18,480 cancers diagnosed among the general Danish population over the same time period.

This means that weighing above average increased the risk of all cancers by 12 percent.

The heightened risk was the same for cancers previously identified as obesity-related, such as kidney cancer and pancreatic cancer, and for blood and neurological cancers.

So why is obesity linked to an increase in cancer risk?

Scientists have found that obesity is associated with a rapid rise in the number of cells as well as the secretion of high levels of proteins and hormones that are pro-inflammatory such as estrogen – all of which is linked to cancer.

‘Given the increasing obesity epidemic, our findings have contributed much needed recent data on the overall burden of cancer among patients hospitalized for overweight and obesity,’ the authors wrote in the study.

Obesity is known as a risk factor for several chronic health conditions aside from cancer including type 2 diabetes, strokes and heart attacks.

US health officials say that addressing the obesity epidemic will not only lead to better health outcomes but also reduce medical costs.

In 2012, a study from Cornell University in New York found obesity accounts for about 21 percent of total US health care costs, approximately $190.2 billion per year.

Obesity continues to plague more than one-third of adults in the US, and experts have warned that that proportion will only grow as younger generations do.

Over the last two decades, the US has implemented countless awareness programs aimed at both adults and children to try to combat the obesity epidemic.

Former first lady Michelle Obama became a mascot for healthier children while her husband was in office, spearheading the ‘Let’s Move’ campaign, designed to motivate children to eat healthier and stay active in an effort to promote overall health.

Loss of sex drive: The surprising nut that can boost your libido

National lockdown is only way to save Christmas, say Sage

Coronavirus: UK's infections are on 'steady rise' but not out of control, app data suggests