Bed bugs scuttled the Earth 100 million years ago alongside the dinosaurs, scientists have found.

Previously thought to have evolved 50 million years ago, the latest study shows they are actually twice as old as bats, thought to be their first hosts.

While they could have fed on the dinosaurs, birds and burrowing animals were more likely hosts as they prefer animals with ‘homes’ like nests and burrows.

By understanding the tiny bugs better scientists hope to better control and prevent the transmission of insect-borne diseases. 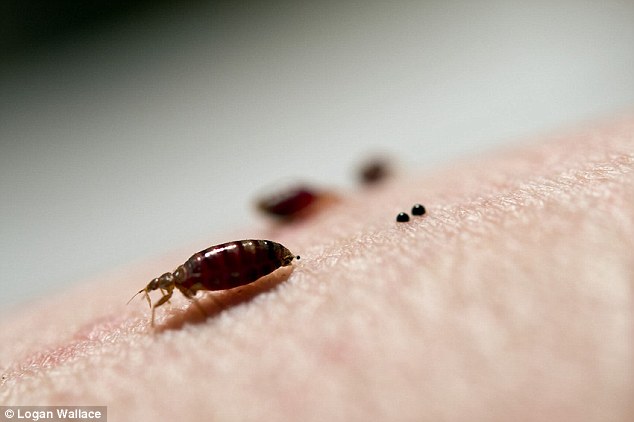 Bed bugs (pictured) scuttled the Earth 100 million years ago alongside the dinosaurs, scientists have found

Scientists from a number of institutions, including the University of Sheffield, compared the DNA of dozens of bedbug species to understand their evolution and their relationship with humans.

The findings revealed that Bedbugs evolved 50 million years before bats – a mammal that people had previously believed to be their first host.

Genetic evidence show that they have been parasitic companions with other species aside from humans for more than 100 million years, walking the earth at the same time as dinosaurs.

More research is needed to find out what their host was at that time, although current understanding suggests it’s unlikely they fed on the blood of dinosaurs.

This is because they usually attached to animals that have a ‘home’, such as a bird’s nest, an owl’s burrow, a bat’s roost or a human’s bed – a mode of living that dinosaurs don’t seem to have adopted.

Bedbugs may rank high among the list of most unwanted human bedfellows but until now, little was known about when they first originated.

The team, which includes University of Sheffield in the UK, spent 15 years collecting samples from wild sites and museums around the world, including African caves, cliffs and bird nests in Asia.

Based on the findings, experts found that the evolutionary history of bed bugs is far more complex than previously thought.

Professor Mike Siva-Jothy from the University of Sheffield’s Department of Animal and Plant Sciences, said: ‘To think that the pests that live in our beds today evolved more than 100 million years ago and were walking the earth side by side with dinosaurs, was a revelation.

‘It shows that the evolutionary history of bed bugs is far more complex than we previously thought.’ 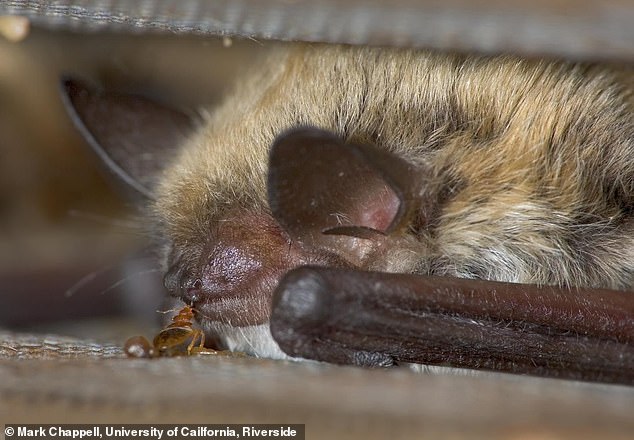 Previously thought to have evolved 50 million years ago, the latest study shows they are actually twice as old as the bats, thought to be their first hosts

HOW TO SPOT A BED BUG

Small dark dots are the key.

Experts say the buttons on a mattress are a popular hiding place If the infestation is bad, small white dots – which are bedbug eggs – may be visible.

A faint almond smell may also be noticeable

Dr Steffen Roth from the University Museum Bergen in Norway, who led the study, added: ‘The first big surprise we found was that bedbugs are much older than bats, which everyone assumed to be their first host.

‘It was also unexpected to see that evolutionary older bedbugs were already specialised on a single host type, even though we don’t know what the host was at the time when T. rex walked the earth.’

The study also reveals that a new species of bedbug invades human environments about every half a million years.

When bedbugs changed hosts, they also didn’t always adapt to stay on that host but maintained the ability to jump back to their original host.

This demonstrates that while some bedbugs become specialised, some remain generalists, jumping from host to host.

Professor Klaus Reinhardt, a bedbug researcher from Dresden University in Germany, who co-led the study, said: ‘These species are the ones we can reasonably expect to be the next ones drinking our blood, and it may not even take half a million years, given that many more humans, livestock and pets that live on earth now provide lots more opportunities.’

The team also found that the two major bedbug pests of humans – the common and the tropical bedbug – are much older than humans.

This contrasts with other evidence that the evolution of ancient humans caused the split of other human parasites into new species.

Professor Mike Siva-Jothy from the University of Sheffield, added: ‘These findings will help us better understand how bedbugs evolved the traits that make them effective pests – that will also help us find new ways of controlling them.’

The researchers hope the findings will help create an evolutionary history of bed bugs, how they evolve to use different hosts and how they develop new traits.

The aim is to help control insects effectively and prevent the transmission of insect-vectored disease, say the scientists.

The research has been published in Current Biology.

WHAT ARE BED BUGS?

Bedbugs are small insects that often live on furniture or bedding. Their bites can be itchy but do not usually cause other health problems.

Bedbugs can hide in many places, including on bed frames, mattresses, clothing, furniture, behind pictures and under loose wallpaper.

Bedbugs can hide in many places, including on bed frames, mattresses, clothing, furniture, behind pictures and under loose wallpaper.

HOW DO BED BUG INFESTATIONS HAPPEN?

Genetic tests have revealed that a single undetected pregnant bed bug is all it takes to start an entire infestation.

A DNA study at Sheffield University showed colonies of bed bugs come from a common ancestor or a few of the female bed bugs.

The pregnant bed bug could rapidly create a colony of thousands that feed on humans.

Bed bugs are capable of surviving without feeding for a month as they wait for a human.

In the late 1880s, an estimated 75 per cent of households were affected, but by the outbreak of World War II, that figure had dwindled to 25 per cent,

Their recent resurgence has been blamed by some experts on resistance to commonly used insecticides and international travel.

Can science cure a broken heart?

US Department of Defense HACKED, exposing private information of 200,000 people

African fish may hold key to stopping ageing in humans