The All Progressives Congress (APC), yesterday, exonerated itself from the protest at the Abuja residence of  Justice Mary Odili of the Supreme Court, blaming the Peoples Democratic Party (PDP) as the sponsor.

APC’s deputy national publicity secretary, Yekini Nabena, told journalists that the protest was sponsored by the PDP as a smokescreen to portray the Bayelsa State APC governorship candidate, David Lyon, and his supporters in bad light.

“Nobody should be fooled by the usual antics of the PDP. Resort to extra-judicial tactics, such as maligning the judiciary and its officials is their stock in trade. The same hired urchins the PDP chairman, Uche Secondus, has used for his senseless protests at the embassies of the UK, US and the European Union were used for Tuesday’s protests at Justice Odili’s residence.

“The APC national leadership is already pursuing all legal avenues to contest the decision of the Independent National Electoral Commission (INEC) to declare Duoye Diri as Bayelsa governor, having failed to meet the mandatory constitutional requirement to become the governor.

“Also, our leaders have already told our supporters to avoid violent confrontations, while legal avenues are sought to review INEC’s unconstitutional decision. Our people have listened and are confident our judicial system will ensure that the people’s will and justice is done,” Nabena said.

But in its response, the PDP said Nigerians know the propensity and capacity of the APC to intimidate the opposition and members of the civil society.

PDP national publicity secretary, Kola Ologbondiyan, told Daily Sun that the agenda of the APC was to silence leaders of the opposition and members of the civil society.

“You know that they are in hallucination mood. Theirs is a confused party that is leading a confused government. We are not surprised that they are hallucinating. Nigerians know who they are. And Nigerians have not forgotten how members of their party burnt a woman leader of our party to death in Kogi State.

“Nigerians are aware how their national chairman , Adams Oshiomhole, made an inciting statement that led to arson, vandalism and destruction of government property as well as the property of our members and leaders of our party in Bayelsa State. Nigerians also know that APC is out to silence the leaders of the opposition in Nigeria as well as members of the civil society, in order to kill our democracy.

“As a matter of fact, Nigerians are surprised that Adams Oshiomhole is still walking the streets a free man after the inciting statements that led to arson in Bayelsa State, consequent upon which our party urged the Inspector-General to take him in for questioning and make him answerable for the crisis and crime against humanity in Edo and Bayelsa states.

The Vanguard for Defence of Justice and Good Governance has condemned the recent attack on Justice Mary Odili, following her verdict  that overturned the Bayelsa State governorship election in favour of the PDP.

The group, in a statement by its president, Braid Jasper, and secretary, Jumbo Ashaka, in Port Harcourt, said its findings revealed that the protesters at the Abuja residence of Justice Odili perpetrated the act because she was wife of ex-governor Peter Odili, who is also a PDP chieftain.

“Our findings show that the irate APC youths, who attacked Mary Odili’s Abuja home claimed that the judgment was influenced by the fact that Justice Mary’s husband, Dr. Peter Odili, former Governor of Rivers State and one-time presidential aspirant on the platform of the PDP was the principal reason the judgment went against the APC.

“Nothing could be more misplaced than this misconception. Dr. Peter Odili was still in PDP when Justice Mary Odili wrote and read the lead judgments that upturned the election petitions of Lagos, Kaduna, Nasarawa and Katsina states, which were all won by the APC. Our question is, where were these attackers when all of the above judgments happened under Justice Mary Odili’s watch?” the group queried.

The group called on security agencies to “arrest and prosecute anybody who made inciting statements that led to the attack on Justice Mary Odili and all those involved in such attacks.”

The Coalition of Civil Society Organisations for Democracy also condemned the protest stagedns at residence of Justice Odili.

At a press briefing in Abuja, convener of the group, Conscious Richard, said the development did not portend good omen for the country’s democracy and urged the Supreme Court to remain steadfast and stand by all the judgments it has delivered on the 2019 general election to safeguard the sanctity of the judiciary.

Richard advised persons making statements that could trigger crises in Bayelsa State to desist in the interest of the country’s democracy.

The Vanguard for Defence of Justice and Good Governance noted that: “Dr. Peter Odili was still in PDP when his dear wife, Justice Mary Odili wrote and read the lead judgements that upturned the election petitions of Lagos, Kaduna, Nasarawa and Katsina states, which were all won by the APC.” 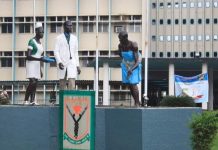 COVID-19: Foreigners leaving Nigeria to use their health facilities – Minister