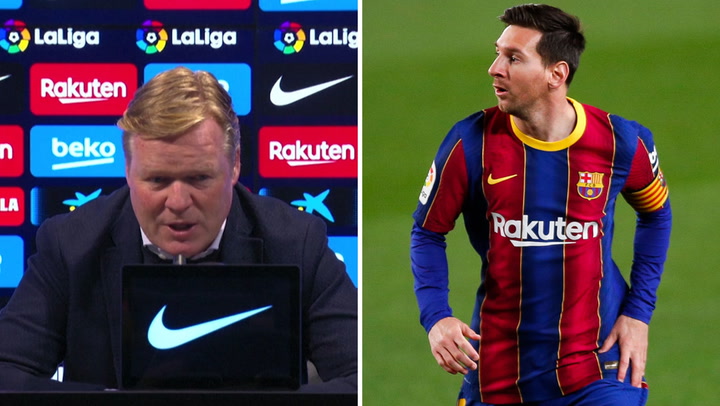 Sergio Aguero is playing a key role in trying to persuade Lionel Messi to sign a new contract at Barcelona, club president Joan Laporta has revealed.

The former Manchester City striker joined the Blaugrana earlier this month after his contract at the Premier League champions expired.

Aguero and Messi have been teammates at international level with Argentina for the past 15 years and the two have often been roommates during matches.

Barcelona’s signing of Aguero was thought to have been accelerated by his relationship with his fellow Argentine and his arrival was part of the club’s charm offensive on Messi to renew his contract.

President Laporta – who was elected to his position in March following the resignation of his predecessor Josep Maria Bartomeu last year – has now explained that the former City striker is helping to persuade Messi to remain at Camp Nou.

Messi, who celebrated his 34 th birthday earlier this week, is out of contract at the Catalan giants – where he has spent the entirety of his professional career – on 30 June.

Laporta told Catalan media outlet La Vanguardia : “I would like Messi to tell us ‘yes’ as soon as possible. He would help us in every way.

Lionel Messi’s contract, Barcelona’s debt and the 8 players on the market in fire sale

“Aguero is helping. He is telling him every day to stay.

“He (Messi) is excited and I am grateful to him for the desire he is showing to stay.”

The club’s hopes of tying Messi down to a new contract have been complicated by the club’s long-standing debt which is currently reported to be €1.1billion.

They have already secured the signings of Aguero, Eric Garcia and Memphis Depay – all as free agents – alongside paying €9million to Real Betis to exercise their purchase option for full-back Emerson Royal.

That has led to the Spanish top flight suggesting that they could block Barcelona’s attempts to register a new contract for Messi – the best paid player in world football – if they do not make deep and substantive cuts to their wage bill.

La Liga president Javier Tebas explained, as per Mundo Deportivo , and cited by ESPN : “Barcelona have exceeded their wage cap.

“I hope they can keep Messi, but to do so, they will have to make cuts elsewhere.”

“Barca have to restructure their debt. If they manage that, the situation won’t be serious.

“But they have taken their wage bill to the limit. And when football has coughed — or, better put, punctured a lung — they haven’t wanted to absorb that loss of income. They must take measures.

“Of the €700m losses [across La Liga], half of it is for Barcelona. There are other big clubs that have made a bigger effort to avoid it. Real Madrid have made a commendable effort to ensure their losses aren’t the same as Barca, who take the trophy for losses.”