The mayor of London, Sadiq Khan, is to tell Michel Barnier that the deal he is pulling together with Theresa May will not only damage the UK but the rest of Europe.

Ahead of a meeting with the EU’s chief negotiator in Brussels, Khan said he would warn that jobs lost by the City of London would likely leave Europe for New York, Singapore and Hong Kong.

Khan will point to the almost 700,000 people who marched on parliament over the weekend to emphasise the growing realisation in the UK that Brussels and Downing Street are stitching together a damaging deal.

“I’d make this point to Michel Barnier when I meet with him: that I think a bad Brexit deal, or even worse a no deal, is not something that is just going to be bad for London and the UK but will be bad for Europe as well,” Khan told the BBC’s Today programme.

“These jobs that may leave our country I think are not going to go to Paris, Brussels Frankfurt, Madrid. They are going to New York, Singapore and Hong Kong … There seems to be a false choice now: a no deal or a bad Brexit deal.”

At least 5,000 jobs are expected to leave the City’s financial sector before Brexit day. Earlier this year, Sir Mark Boleat, a former policy chairman at the City of London Corporation, warned that Brexit could ultimately result in the loss of 75,000 jobs and up to £10bn in annual tax revenue once the full repercussions become clear.

The free trade agreement being offered by the EU does not provide any security for the City’s financial services sector that they will be able to continue to operate across Europe from London after Brexit. Many are being forced to establish continental operations.

Khan said: “We are entering a crunch time in these Brexit negotiations and I am aware that Barnier this month met a delegation from the European Research Group [of Eurosceptic Tory parliamentarians], Iain Duncan Smith, Owen Paterson, Lord Trimble, and he has also met Arlene Foster from the DUP. And I am keen for him to hear a different perspective.”

Appearing before a committee of the London assembly on Thursday, Khan warned that such was the lack of information from government that the capital was at yet unable to prepare for a no-deal Brexit.

Khan told the BBC on Friday he was particularly concerned for the safety of people living in London, 1 million of whom are EU nationals, should the UK drop out of Europol, the EU’s crime database, and the European arrest warrant on 29 March 2019.

While insisting he had never been an advocate of “project fear”, the mayor said the policy track taken by the government was a “recipe for us to be less effective at keeping our country safe”.

Khan, a former Labour MP, said it was time for parliament to “trust the British people” by offering a second referendum on the terms of the UK’s exit.

He said: “There is a possibility, a real possibility, of our parliament rejecting the deal negotiated by our prime minister. There is a real possibility of our parliament voting for a general election or voting for the British people to have a say on the options negotiated by the prime minister with the option of staying in the EU. It is important for Michel Barnier and important for the EU to hear that perspective as well.” 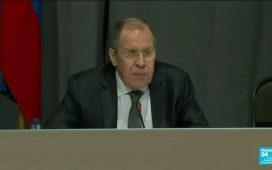