A baby girl who was born with a back-to-front heart has defied the odds after having surgery just a few hours old.

Alba Butler celebrated her first birthday despite her parents, Alejandra Garcia, 26, and Danny Butler, 30, being told she had a 50 per cent chance of survival.

When Alba was born she was blue from lack of oxygen, due to a rare condition called transposition of the great arteries (TGA), where the arteries leaving the heart are the wrong way round.

She was rushed to surgery as soon as she was born to create a hole in her heart to help oxygen-rich blood reach her fragile body.

Then eight days later, her distraught first-time parents, who were previously told they would never be able to conceive naturally, had to watch as their miracle daughter was taken in for nine-hour open heart surgery. 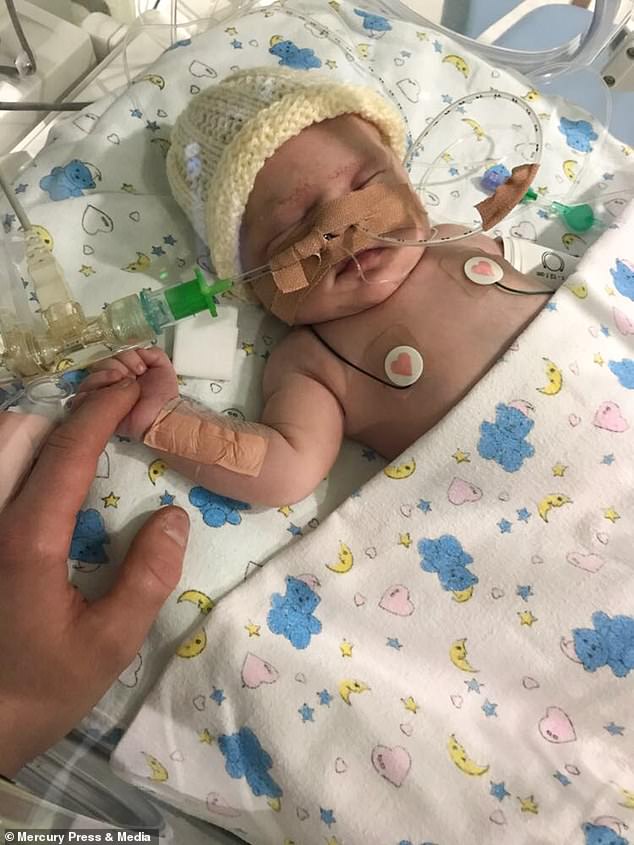 Alba Butler was born with a rare heart condition called transposition of the great arteries (TGA), where the arteries leaving the heart are the wrong way round. She had surgery a few hours old (pictured after) and open heart surgery eight days later 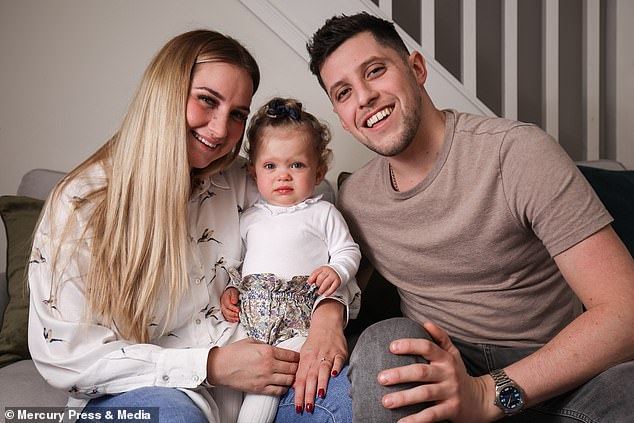 Alba’s engaged parents, Alejandra Garcia, 26, and Danny Butler, 30, from Lancashire, were told their baby had a 50 per cent chance of survival 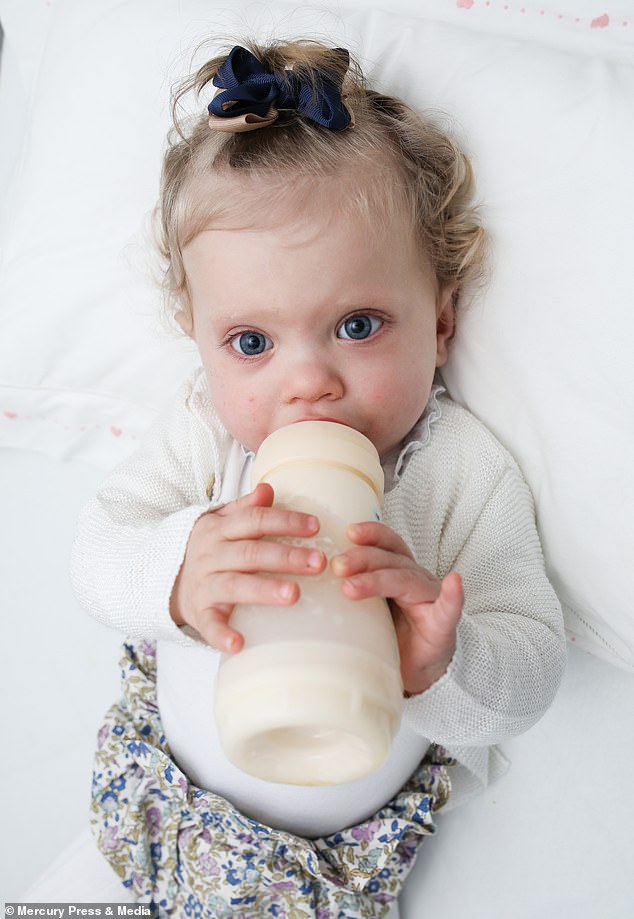 ‘She’s thriving’: Alba defied the odds and celebrated her first birthday this month

Miss Garcia and Mr Butler, from Thornton, Lancashire, were told they would never be able to conceive naturally, and were on the IVF waiting list.

Then, to their delight, Miss Garcia, who is engaged to Mr Butler, discovered she was pregnant at 10 weeks in May 2017.

But at their 20-week scan, the parents-to-be’s joy was shattered when they were told their baby girl had transposition of the great arteries (TGA).

The condition is relatively common, according to NHS Choices, accounting for around 5% of cases of congenital heart disease, and affecting approx 20 to 30 per 100,000 live births.

Miss Garcia, who works in marketing, said: ‘We found out about Alba’s heart at her 20-week scan. We were so upset, I couldn’t stop crying.

‘Heart defects are so difficult to pick up on ultrasounds so it really is amazing that they found it.

‘Neither of us had heard of TGA before which made it all so scary. My first thoughts were “we’re going to have to terminate”.

‘After being told I would never conceive and then finding out I was pregnant with Alba, I knew it all felt too good to be true.’

But Alba was born via a planned cesarean at Liverpool Women’s Hospital on November 15 2017 and rushed in an ambulance to Alder Hey Children’s Hospital where she underwent her first operation.

‘When they told us she would need to be to transferred and taken to theatre right away, they had to warn us that some babies don’t make it.

‘When she was born, Alba was already quite blue from the lack of oxygen. She was so poorly she had to be taken straight to the ambulance waiting to transfer her for her first surgery.

‘I didn’t get to hold her, I just got to touch her finger as she was taken away.’ 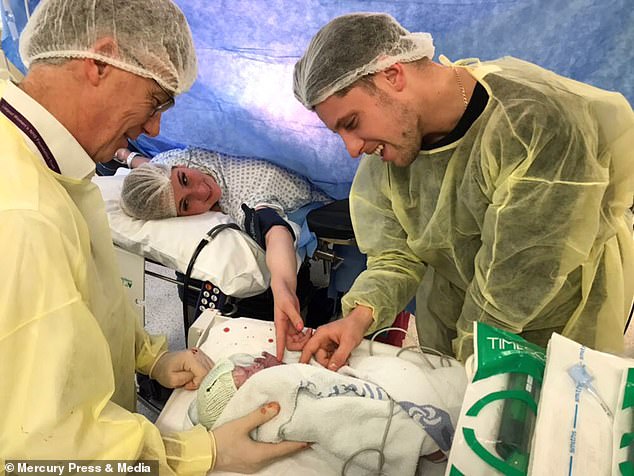 ‘I didn’t get to hold her, I just got to touch her finger as she was taken away’, Mrs Garcia remembers the moment Alba was taken to surgery straight after a c-section delivery 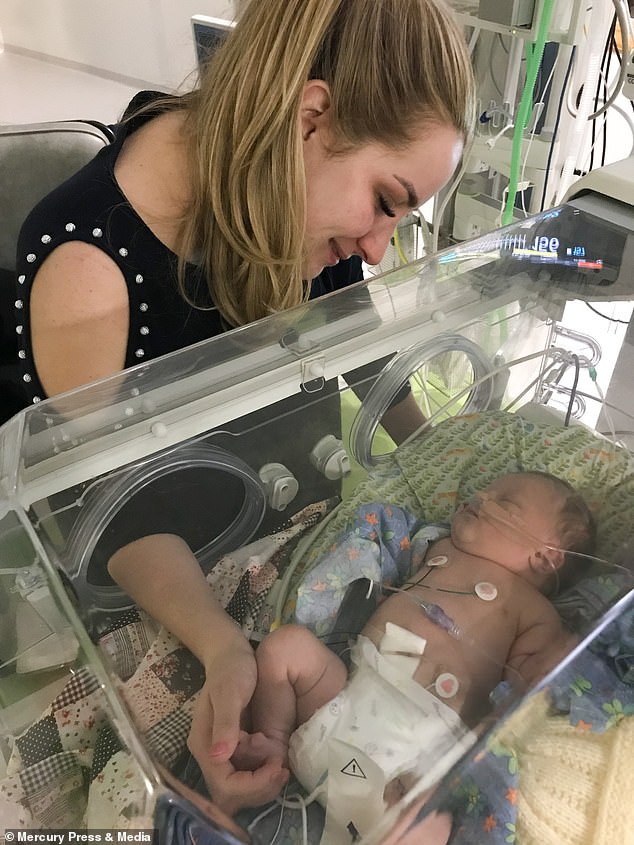 The mother, who was on the IVF waiting list after being told by doctors she would never conceive naturally, met her ‘miracle’ baby for the first time 39 hours after she was born 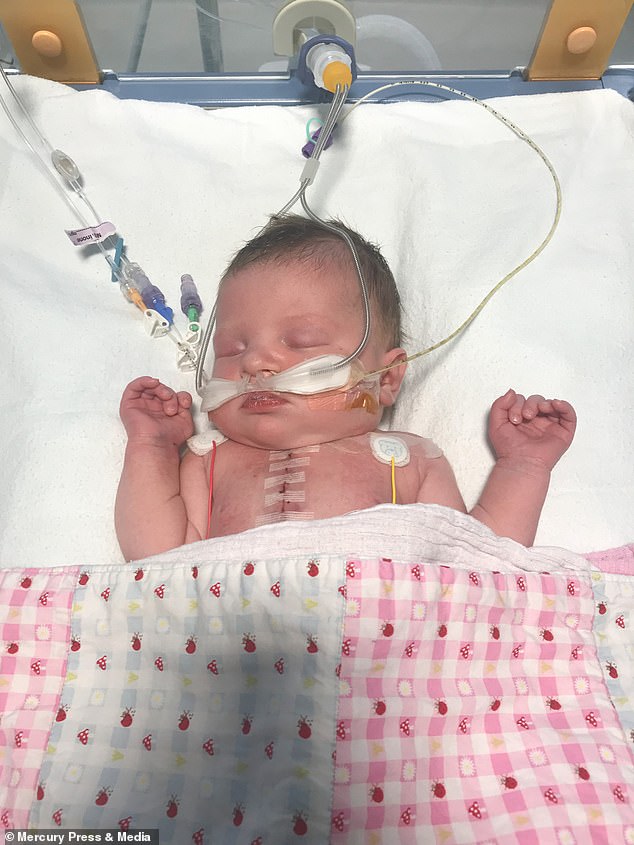 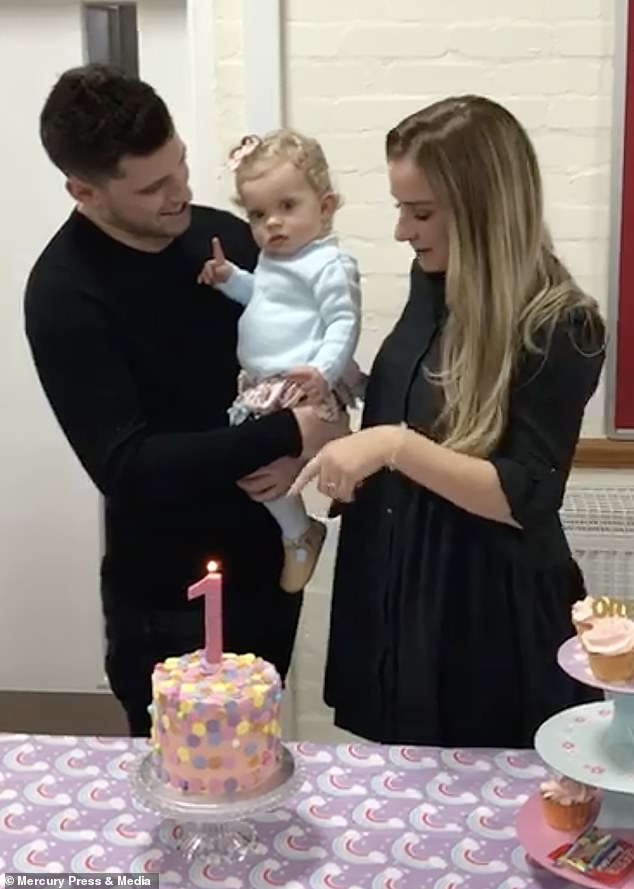 Doctor’s warned Alba wouldn’t reach her first birthday, but she ‘exceeded all expectations’

Some babies with TGA also have a hole in their heart, called a ventricular septal defect (VSD), which allows the oxygenated and deoxygenated blood to mix.

But ultrasounds carried out every few weeks throughout Mrs Garcia’s pregnancy showed Alba didn’t have a VSD so no oxygen would get to her body when she was born.

Her first surgery was a Balloon Septostomy surgery to allow her blood to mix.

‘When Alba came out of her first surgery, all I wanted was to hold her in my arms but I couldn’t leave the hospital because I’d had major surgery.

‘Danny was with her and sent me lots of pictures. The cardiac consultant even made the effort to come to my hospital room to explain it had all gone well which they didn’t have to do.’

The parents’ relief was short-lived as they then had to watch their newborn go for open heart surgery to reverse her condition.

Mrs Garcia said: ‘When the nurses came to give me her gown to get her ready I just burst into tears.

‘No gown should be made for a baby. Just looking at this tiny, tiny gown, I felt like I couldn’t put her in it.

‘Then I remember walking down this really long corridor with loads of doors to theatre and I could barely even see I was crying so much.

‘I couldn’t believe I was handing my baby over to strangers and I might never see her or hold her again. It was so surreal.

‘She was in surgery for just under nine hours. When she came out they called Danny and he barged into the breastfeeding room where I was expressing milk.

‘I just left the milk behind, I didn’t care, and started running down the corridor.

‘As soon as I could see her and see she was okay and breathing, I just can’t even describe that feeling – it was a huge relief. I could replay that moment every day in my head.’ 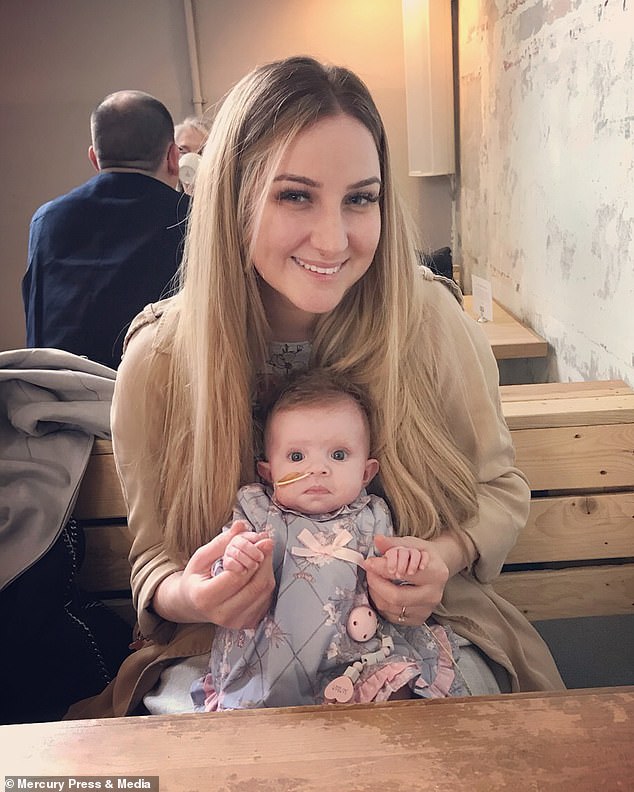 Alba has since been back at hospital with a fluid build up called chylothorax and pneumonia, but recovered well at Alder Hey Children Hospital, her mother, pictured, said 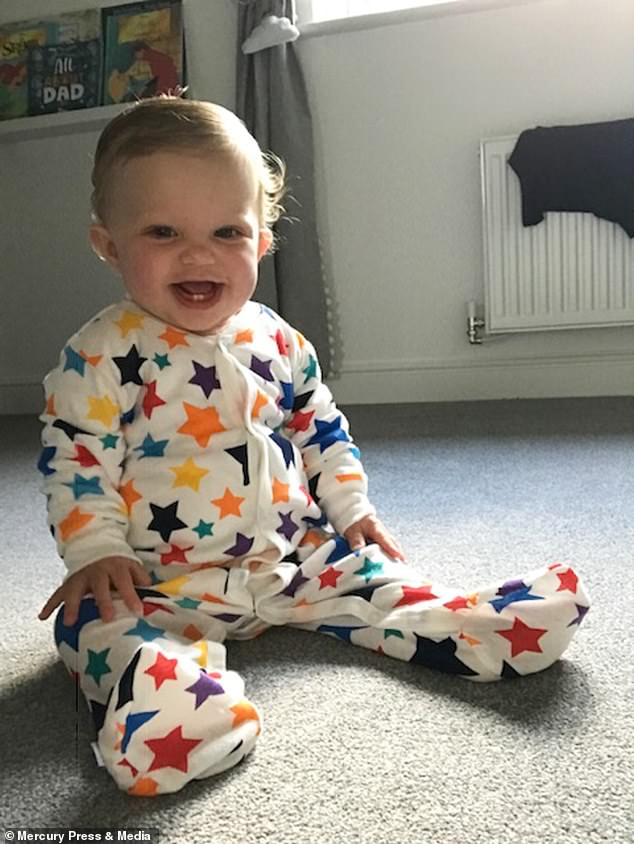 ‘I never thought she would even exist but she is here, fighting all the odds’ Mrs Garcia said

Alba had her first birthday party last week despite doctors’ warnings that Alba might not make it.

Mrs Garcia said: ‘When we got Alba’s diagnosis, we prepared ourselves for the worst but she has exceeded all our expectations. She’s a little warrior. It sounds cheesy but she’s my hero. We’re so proud.

‘We were told she might be a bit delayed with her development but she’s reaching all her milestones.

‘She had her flu jab the other day and most babies would scream and cry but she just looked at the nurse like ‘I’ve been through more than this’.

‘I never thought she would even exist but she is here, fighting all the odds.’

Alba’s incredible recovery hasn’t all been plain sailing as a month after her release from hospital in December 2017. She was back at hospital with a fluid build up called chylothorax and then contracted pneumonia.

But once again, with the help of the ‘amazing’ doctors and nurses at the hospital, Alba fought back and went home seven weeks later.

The mother said the hospital didn’t just save her baby’s life but hers too. ‘I can’t stress enough how amazing Alder Hey Children Hospital – and all the hospitals – have been’, she said.

‘At Alder Hey they’re more like a family than a hospital. They even sent her a first birthday present which I cried my eyes out over.

‘They are all just fabulous. I’m doing the Inka trail next year and I’m not fit so it’s going to be a challenge but I don’t think there’s anything I could ever do to fully pay them back.

‘I don’t just owe them Alba’s life, I feel like I owe them my life too.’

‘Knowing that I never even thought I would be able to have a baby just makes Alba even more of a miracle.’

Mrs Garcia is walking the Inka trail next year to raise money for Alder Hey.

WHAT IS TRANSPOSITION OF THE GREAT ARTERIES?

This means that blood flows to the lungs and picks up oxygen but is then pumped back to the lungs instead of travelling around the body.

Blood flowing round the body is unable to reach the lungs to pick up oxygen and continues circulating – which is why children born with the condition can turn blue.

It is relatively common, according to NHS Choices, accounting for around 5% of cases of congenital heart disease. It affects approx 20 to 30 per 100,000 live births.

The world’s smallest infant to survive the procedure was Jerrick De Leon, born 13 weeks premature in 2005 who weighed just over 1.5 pounds (700 grams).

There is also the risk of more minor complications after surgery, such as a lung infection, or fluid collecting around the heart or lungs. 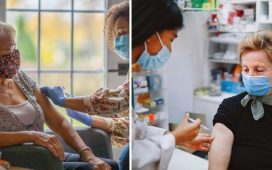 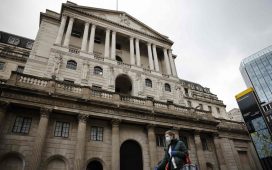 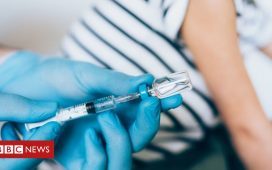 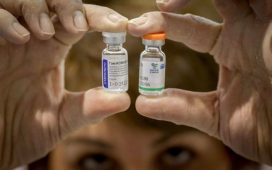 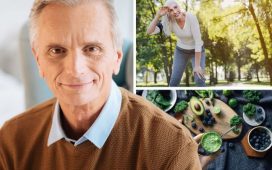