The Australian actress Ningali Lawford-Wolf has died after falling ill while on tour with a production at the Edinburgh International Festival.

The 52-year-old, who had been performing in the show, The Secret River, died on Sunday.

She was a regular at the festival but was best known for acclaimed performances in films including Rabbit-Proof Fence.

Sydney Theatre Company said they were “absolutely devastated” by the news.

Two shows in Edinburgh were cancelled last week after Ms Lawford-Wolf fell ill before one of her cast mates stepped into her role as narrator for the shows remaining four performances.

In a statement Sydney Theatre Company paid tribute to the actress, who they described as one of Australia’s greatest treasures”.

“Ningali was an incredibly talented performer as well as a wonderfully caring and thoughtful person. We’ve lost one of Australian theatre’s greatest treasures.”

Ningali was a Wangkatjungka woman born under a tree at Christmas Creek Station in the far north Kimberley region of Western Australia.

She trained as a dancer at the Aboriginal Islander Dance Theatre, then continued to perform professionally with Bangarra Dance Theatre in Sydney to build a stage and screen career. 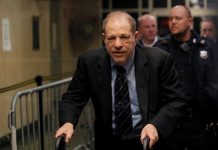