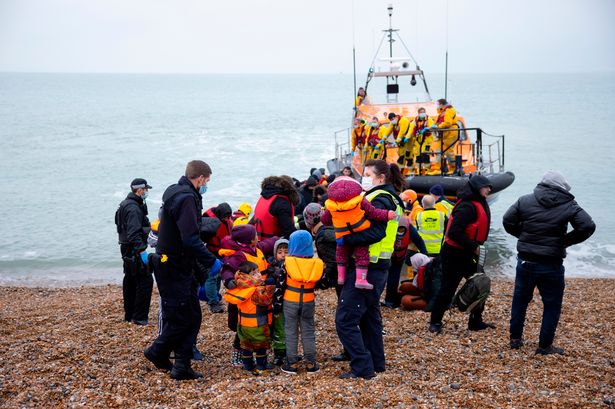 At least 27 people have died after their dinghy capsized while trying to cross the English Channel from France to the UK, local reports say.

Five women and a girl are reportedly among the victims confirmed dead so far in what has been described as the deadliest incident of its kind ever.

Two suspected people smugglers are currently in custody in Calais after being arrested north of Dunkirk near the Belgian border, according to French daily newspaper Liberation.

The Dunkirk prosecutor’s office has opened an investigation for “assistance with entry to illegal residence in an organised group” and “aggravated manslaughter”.

According to fishermen, more migrants left France’s northern shores than usual to take advantage of calm sea conditions, although the water was bitterly cold.

One fisherman called the rescue services after seeing an empty dinghy and people floating motionless nearby.

Migrants being rescued by the Dungerness Lifeboat today
(

Reports said several migrants headed for Britain died after their vessel sank in the Calais area.

President and chairman of the ports of Calais and Boulogne Jean-Marc Puissesseau earlier told BBC News: “What I know is that there were 50 people on this boat.

“What I have heard is that there are 30 people who have died, and about five or six who have been found.”

Following the sinking, Dunkirk prosecutors opened a criminal investigation for ‘manslaughter’ and ‘assistance with illegal immigration in an organised gang’.

It follows claims that people smugglers had organised the passage of the overcrowded boat, charging thousands to those on board to get to Britain.

A spokesman for Dunkirk prosecutors confirmed the opening of the investigation, saying preliminary reports were already being compiled.

Prime Minister Boris Johnson said he was ”shocked, appalled and deeply saddened” after at least 30 migrants died when their boat sank in the Channel.

“Now is the time for us all to step up and work together and break these gangs who are literally getting away with murder,” he said, adding “this shows the gangs who are sending people to sea will literally stop at nothing.”

He called for France to allow joint beach patrols with British officials.

“Our offer is to increase our support, but also to work together with our partners on the beaches concerned,” he said.

“We have had difficulty persuading some of our partners, particularly the French, to do things in a way that we think the situation deserves.”

His comments came after he chaired a COBR meeting this afternoon on the tragic situation.

“They agreed on the urgency of stepping up joint efforts to prevent these deadly crossings and to do everything possible to stop the gangs responsible for putting people’s lives at risk.

“They underlined the importance of close working with neighbours in Belgium and the Netherlands as well as partners across the continent if we are to tackle the problem effectively before people reach the French coast.

“Both leaders were clear that today’s tragic loss of life was a stark reminder that it is vital to keep all options on the table to stop these lethal crossings and break the business model of the criminal gangs behind them.”

Migrants launching an inflatable boat and setting off for the UK
(

Mayor of London Sadiq Khan added: “This is an utter tragedy. No one should have to risk their life in this way.

“Those seeking sanctuary need safe routes – the Government must work with the French authorities to provide them.”

A French government spokesman said the tragedy happened soon after 2pm on Wednesday.

A search party will continue to look for any more survivors of a migrant boat that sank in the English Channel, the French interior minister has said.

Gerald Darmanin said in a press conference: “There are two people who have been saved, and their days are numbered.

“Amongst the … dead, as far as we know five were women and one was a little girl.

“We don’t have any more information with regards to those people.

“We will carry on searching in the hours to come to see if there are any more people.”

A group of more than 40 migrants run on the beach with an inflatable dinghy, to leave the coast of northern France today
(

People who put migrants on boats to the UK in rough weather conditions are murderers, the head of Calais port has said.

Jean-Marc Puissesseau told BBC News: “I think the people who are paid by the migrants to get to your country, with such bad weather, with such rough sea, they are murderers.

“They are really murderers. They don’t have any success trying to cross with these weather conditions.

The sea is cold and the waves are big.

“They are murderers, and the poor migrants who have spent months and months to come to here, and who die so close to their dream… I don’t know what to do really.”

Around 20 emergency service and port authority vehicles are currently at the port of Calais.

Police are patrolling the Paul-Devot quay and have closed access to the general public.

Migrants being rescued on Wednesday
(

The atmosphere was said to be “heavy and the tension at its height” when French lifeboat the SNSM star docked around 6.30pm.

Funeral directors are on site as the bodies of the victims begin to be brought to port.

Local authorities had previously said five migrants had drowned, but that the tally was likely to increase because several of those rescued were in a serious condition.

A spokesman for the Interior Ministry in Paris earlier said: “At least five people died have died. The toll could be heavier.

“Around 2:00 p.m. on Wednesday, a fisherman reported the discovery of about fifteen bodies floating off Calais.

“A French Navy vessel recovered several bodies, including five dead people and five unconscious, according to an early report.”

The death toll makes it the worst small boat tragedy since the current crisis escalated in 2019.

A spokesman for French coastguards said ‘rain and extreme cold’ together with rough seas had contributed to the disaster.

French Interior Minister Gérald Darmanin said he was on the way to the scene of the accident.

One fisherman, Nicolas Margolle, earlier told Reuters he had seen two small dinghies on Wednesday, one with people onboard and another empty.

He said another fisherman had called the rescue operation after seeing an empty dinghy and 15 people floating motionless nearby, either unconscious or dead.

The Maritime Prefecture of the Channel and the North Sea said the rescue operation is ongoing.

They confirmed a fishing boat raised the alarm to the Gris-Nez regional operational surveillance and rescue centre (CROSS) that several migrants were at sea in the Pas-de-Calais Strait.

French Navy helicopter The Dauphin was assisted by a Coastguard helicopter from Dover.

A spokesman for the Maritime Prefecture of the Channel and the North Sea said: “The operation is currently still in progress, several castaways have been recovered.

“The CROSS is implementing an air and sea system aimed at looking for possible other people at sea as well as evacuating those found.

“The vital prognosis of some castaways unfortunately seems to be underway.”

Reacting to the tragedy Kent Refugee Action Network tweeted: “This is the worst news. Our hearts go out to the victims, and to their friends and families.

“These deaths were avoidable and they shame us all.”

Liberal Democrat Home Affairs Spokesperson Alistair Carmichael MP said: “This is heartbreaking news. People are dying in the Channel because of the Government’s total failure to get a grip on this crisis.

“Priti Patel must stop her pointless posturing and take action to stop these dangerous crossings, by providing safe and legal routes to sanctuary for refugees.”

Bella Sankey, director of charity Detention Action, said she was “truly saddened” by the reports of more migrant deaths in the Channel, adding: “The number of people seeking asylum in the UK remains the same as in recent years, so it is this Government’s failures that have allowed this current crisis.

Migrants being rescued at Dover
(

“A cross-party group of MPs have put forward a humanitarian visa proposal which would provide a safe route and save lives and we hope that parliamentarians will vote this into legislation by Christmas.”

It came after around 40 migrants were pictured launching dinghies into the English Channel this morning in a fresh attempt to reach Britain.

Dozens of migrants have crossed the Channel by small boat today for the first time this week.

More than 150 are believed to have made the perilous journey across the Dover Strait by 2pm, according to onlookers monitoring activity off the Kent coast.

Search and rescue operations are believed to have started as early as 2am, with Border Force ship Valiant docking in Dover Marina around 8am.

Dozens of migrants have been rescued
(

Around 50 migrants were estimated to be on board including a woman whose young child no older than the age of three was carried up the gangway by an Immigration Enforcement officer.

They were followed by another young boy draped in a blue blanket for warmth.

At least 50 migrants are also believed to have landed on the beach at Dungeness, Kent.

The Home Office is yet to confirm how many migrants arrived today.

It comes after 886 people arrived in 28 boats on Saturday – the third highest daily tally since the crisis began.

A further 106 migrants were rescued in separate incidents by French authorities today after their boats got into difficulty while attempting the Channel crossing, according to the Maritime Prefecture of the Channel and the North Sea.

Phil Kerton, of migrant support charity Seeking Sanctuary, said: “This horrific news fulfils forecasts that we and others have been making for years.

“Who knows how many others have perished in the Channel without their deaths being observed or their bodies recovered?

“Our thoughts and prayers go out to the families and friends who are bereaved.

“Seeking safety should never end a life. Trying, at any cost, to deter and present asylum seekers from reaching the UK is fundamentally wrong and adds further risk to the already dangerous journeys that are undertaken by desperate human beings who hope to escape violence, discrimination and pending famine and create new lives that offer hope for a better future.”