Astronomers think they’ve found an ‘exomoon’ – a moon that exists outside our own solar system – based on data from NASA‘s Kepler space telescope.

In a new paper, the experts report the discovery of a mysterious body that is almost three times the size of Earth, which they think is an exomoon.

It’s orbiting a Jupiter-sized planet called Kepler 1708b in another solar system, 5,500 light-years away from Earth.

The existence of any exomoon is yet to be officially confirmed, although the first potential candidate was identified four years ago.

Since exomoons cannot be imaged directly, their presence is inferred when they pass in front of a star, momentarily dimming the star’s light. 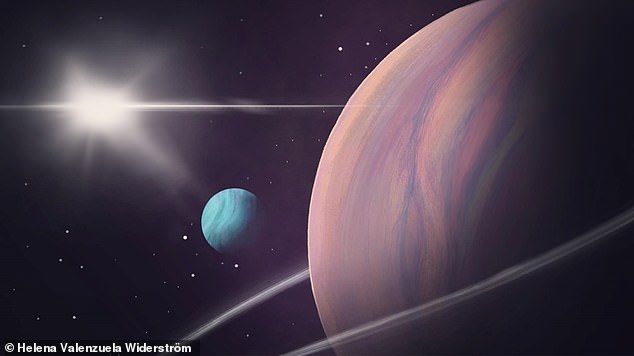 The discovery of a second exomoon candidate hints at the possibility that exomoons may be as common as exoplanets. This image shows an artist’s impression of the potential exomoon

An exomoon is a moon that exists outside our own solar system.

They orbit exoplanets – planets outside our solar system.

The first-ever sighting of an exomoon in 2018 is still awaiting confirmation.

Conversely, there are 4,905 confirmed exoplanets in 3,629 planetary systems, and thousands more exoplanets to be confirmed.

The prefix ‘exo’ comes from Greek, meaning outside, outer or external.

Observations from other space telescopes, like Hubble, will be needed to verify the discovery, a process that could take years.

If confirmed, the new sighting could mean that exomoons are as common in the universe as exoplanets (planets outside our solar system).

The discovery was led by Professor David Kipping and his Cool Worlds Lab at Columbia University and has been published in Nature Astronomy.

‘Astronomers have found more than 10,000 exoplanet candidates so far, but exomoons are far more challenging,’ said Professor Kipping, who has spent the last decade hunting for exomoons. ‘They are terra incognita.’

Confirming the mysterious body orbiting Kepler 1708b as an exomoon could take a long time, considering the first-ever sighting of an exomoon four years ago is still awaiting confirmation.

Verification of this newest candidate could be equally as long and contentious, according to the team.

‘The process of confirmation would similarly involve peer-review and beyond that scientific consensus amongst the astronomical community,’ Professor Kipping told MailOnline.

‘Confirmation would require future observations in this case.’ 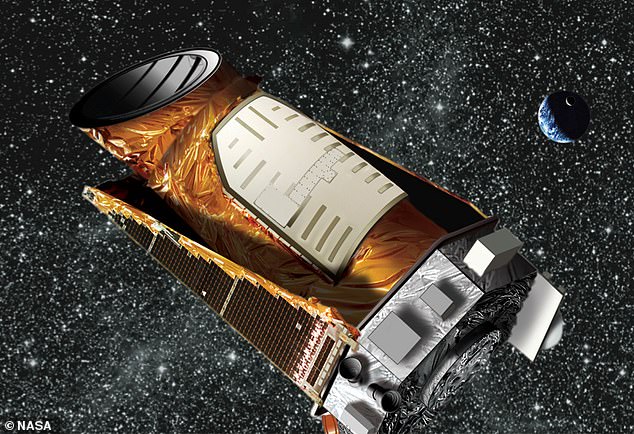 Professor Kipping and his team had been looking at the sample of the coldest gas giant planets captured by Kepler, which was decommissioned in 2018.

Spotting a moon or even a planet hundreds to thousands of light-years from Earth is anything but straightforward.

Moons and planets can only be observed indirectly as they pass in front of their host stars, causing the star’s light to intermittently dim.

Catching one of these fleeting transit signals with a telescope is tricky, and so is interpreting the light-curve data.

Exomoons are even harder to detect than exoplanets because they’re smaller and block less light.

After scanning 70 planets in depth, they found just one candidate – Kepler 1708b – with a moon-like signal.

‘It’s a stubborn signal,’ said Professor Kipping. ‘We threw the kitchen sink at this thing but it just won’t go away.’

Eric Agol, an astronomy professor at University of Washington, said he’s doubtful that this latest signal will turn out to be real, but others sounded more optimistic.

‘It might just be a fluctuation in the data, either due to the star or instrumental noise,’ said Professor Agol.

Michael Hippke, an independent astronomer in Germany, said the new discovery ‘is science at its best’.

‘We find an intriguing object, make a prediction, and either confirm the exomoon candidate or rule it out with future observations,’ he said.

‘I am very excited to see a second exomoon candidate, although it is unfortunate that only two transits have been observed. More data would be very cool.’

Kepler 1708b is a world 5,500 light-years from Earth in the direction of the Cygna and Lyra constellations.

Its newly-discovered potential exomoon is about a third smaller than the Neptune-sized possible exomoon that Professor Kipping and his colleagues earlier found orbiting a similar Jupiter-sized planet, Kepler 1625b, reported in a 2018 research paper.

Both candidates are likely made of gas that has piled up under the gravitational pull caused by their enormous size.

They also may have even started life as planets, only to be pulled into the orbit of an even bigger planet like Kepler 1625b or Kepler 1708b. 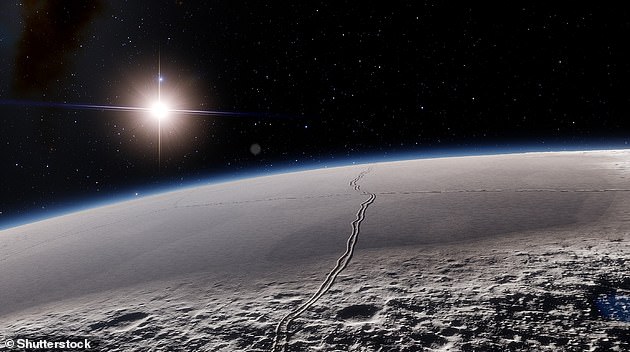 An exoplanet is simply a planet outside of our own Solar System. This is an artistic rendering of what an exoplanet might look like, with its star in the background (stock image)

Both potential moons are located far from their host star, where there’s less gravity to tug at planets and strip off their moons.

In fact, the researchers sought out cold, giant gas planets on wide orbits in their search for exomoons precisely because the analogue in our own solar system, Jupiter and Saturn, have more than a hundred moons between them.

If other moons are out there, they will likely be smaller and harder to spot.

‘The first detections in any survey will generally be the weirdos,’ Professor Kipping said. ‘The big ones that are simply easiest to detect with our limited sensitivity.’

Exomoons fascinate astronomers for the same reasons that exoplanets do – they have the potential to reveal how and where life may have emerged in the universe.

Astronomers want to know how these exomoons form, if they can sustain life, and what role, if any, they play in making their host planets habitable.

Professor Kipping recalled how the existence of exoplanets was greeted with the same skepticism as exomoons are today.

‘Those planets are alien compared to our home system,’ he said. ‘But they have revolutionised our understanding of how planetary systems form.’

The now retired Kepler telescope spent nearly a decade in space looking for Earth-size planets orbiting other stars, but scientists are still analysing its data.

Kepler launched in 2009 and was decommissioned by NASA in 2018 when it ran out of fuel needed for further science operations.

It was launched by NASA specifically for identifying exoplanets.

Since its launch in 2009, Kepler spotted thousands of exoplanets outside our solar system, despite experiencing mechanical failures and being blasted by cosmic rays.

In 2013, Kepler’s primary mission was concluded when a second reaction wheel broke, which meant that the space craft couldn’t hold a steady gaze at its original field of view.

But Kepler was given a ‘new lease on life’ by NASA on its K2 mission, which required it to shift its field of view to new portions of the sky about every three months.

NASA initially assumed that K2 would only be able to conduct 10 campaigns with the remaining fuel, but it went on to complete an astonishing 16 campaigns.