Earth is the only planet we know that has sentient life – but astronomers have found two dozen exoplanets that may have better conditions for life than our home world.

A team led by Washington State University identified 24 ‘superhabitable’ planets out of more than 4,500 known exoplanets that could be a good candidate for life.

They are older, a little larger, wetter and slightly warmer than the Earth and these factors, when taken together with a slightly cooler and longer-living star create better conditions for complex life to develop, the team explained.

While no single planet meets all of the criteria for ‘superhabitability’, they all score higher than Earth overall.

Even though the worlds are all more than 100 light years away – too far away for us to ever visit – the researchers say the discovery can help in the search for life elsewhere in the universe. 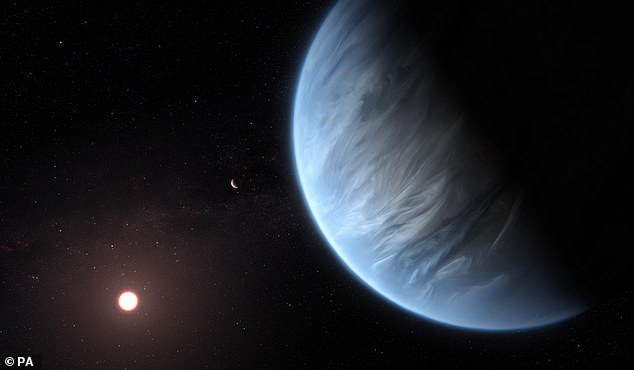 All of the planets uncovered by the research team are more than 100 light years away. They looked at worlds that were potentially ‘better for life’ than Earth. NASA has found some similar to the Earth such as K2-18b (pictured) 110 light years away

Lead author Dirk Schulze-Makuch says it is important to focus space telescope time on likely candidates, and these have the most promising conditions for complex life.

Just because the team say the planets meet the conditions for ‘superhabitability’, it doesn’t mean they are actually habitable as our telescopes can’t see their atmospheres yet – that will come with new technology in the coming years.

For the study, Schulze-Makuch, a geobiologist with expertise in planetary habitability, teamed up with astronomers to identify potential superhabitability criteria.

The team, which included Rene Heller of the Max Planck Institute and Edward Guinan of Villanova University searched through 4,500 known exoplanets.

Over the next few years a raft of space-based telescopes will come online including NASA’s James Webb telescope, the LUVIOR space observatory and ESA’s PLATO.

The criteria for a ‘superhabitable planet’ includes small islands separated by oceans, rather than large continents. This is a view of Bora Bora Lagoon – a ‘paradise on Earth’

‘With the next space telescopes coming up, we will get more information, so it is important to select some targets,’ said Schulze-Makuch.

‘We have to focus on certain planets that have the most promising conditions for complex life. However, we have to be careful to not get stuck looking for a second Earth because there could be planets that might be more suitable for life than ours.’

Habitability does not mean these planets definitely have life, merely that they likely have the conditions that would be conducive to life and are worth further study.

They don’t have the ability to say whether a planet it actually ‘wetter than Earth’, as defined by their criteria, but predict that those planets meeting other criteria such as size, distance from star and surface temperature, will have the required water.

While the Sun is the centre of our solar system, it has a relatively short lifespan of less than 10 billion years – it is currently middle aged.

Since it took nearly four billion years before any form of complex life appeared on Earth, many similar stars to our sun, called G stars, might run out of fuel before complex life can develop if life takes any longer than it did on Earth.

As well as searching for systems with G stars, the team also looked for K dwarf star systems – they are cooler, less massive and less luminous than the Sun.

K stars also have the advantage of long lifespans of 20 billion to 70 billion years. 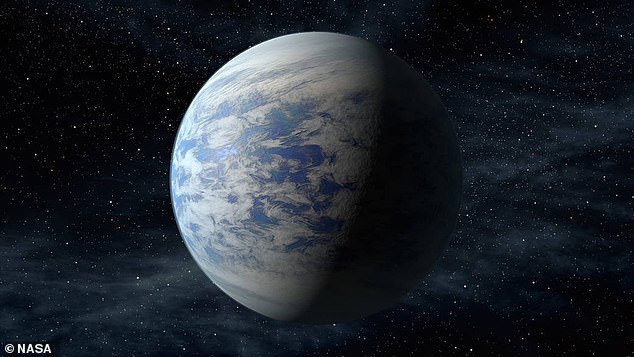 This is an artist impression Kepler-69c, an Earth-sized exoplanet 2,400 light years away. It is on the list of potentially ‘super habitable’ planets but its temperature might be too high at 181F

This would allow orbiting planets to be older as well as giving life more time to advance to the complexity currently found on Earth.

FINDING SIGNS OF SUPERHABITABLE PLANETS INVOLVES A RANGE OF MEASURES

A superhabitable planet is a world more habitable than Earth for humans.

To be able to claim ‘super habitable’ status a planet has to meet certain criteria:

However, to be habitable, planets should not be so old that they have exhausted their geothermal heat and lack protective geomagnetic fields.

Size and mass also matter. A planet that is 10 per cent larger than the Earth should have more habitable land.

One that is about 1.5 times Earth’s mass would be expected to retain its interior heating through radioactive decay longer and would also have a stronger gravity to retain an atmosphere over a longer time period.

Water is key to life and the authors argue that a little more of it would help, especially in the form of moisture, clouds and humidity.

A slightly overall warmer temperature, a mean surface temperature of about eight degrees Fahrenheit greater than Earth, together with the additional moisture, would be also better for life.

This warmth and moisture preference is seen on Earth with the greater biodiversity in tropical rain forests than in colder, drier areas.

Among the 24 top planet candidates none of them meet all the criteria for superhabitable planets, but one has four of the critical characteristics, making it possibly much more comfortable for life than our home planet.

‘It’s sometimes difficult to convey this principle of superhabitable planets because we think we have the best planet,’ said Schulze-Makuch.

‘We have a great number of complex and diverse lifeforms, and many that can survive in extreme environments. It is good to have adaptable life, but that doesn’t mean that we have the best of everything.’

The findings have been published in the journal Astrobiology.