Two areas of South London are undergoing surge testing after a cluster of cases involving the South African variant were discovered. The cases were discovered in Wandsworth and Lambeth. Speaking on the BBC on Tuesday, Dr Julian Tang, Clinical Virologist at the University of Leicester issued a warning about the AstraZeneca vaccine‘s protection against the new coronavirus variant.

A small study of 2,000 people in South Africa has shown that the AstraZeneca vaccine offers minimal protection against mild cases of the South African variant.

The vaccine is still likely to reduce severe cases and deaths from the South African strain, however.

The verdict, which was based on data from people with an average age of 31, shows that protection may be as low as 10 percent.

The research wasn’t able to determine whether it protects against serious illness or hospitalisation, because this group of people were at low risk of serious illness.

Research elsewhere suggests that the vaccine is still likely to reduce severe cases and deaths from the South African strain.

The variant’s arrival in London is thought to be due to someone travelling into the country from Africa in February.

Everyone in the area is being asked to get a test in a bid to contain the virus.

So far there has been 44 confirmed and 30 probable cases of the variant identified.

The Department of Health and Social Care said the two boroughs were being subjected to the “largest surge-testing operation to date”, with additional testing sites being opened.

Government figures reveal a total of 544 confirmed and probable cases of the variant have been found in the country overall.

It comes amid a loosening of the restrictions in England, which has seen pubs, restaurants and non-essential retail opening for business.

Prime Minister Boris Johnson has urged people to remain cautious and observe the social distancing rules while restrictions are eased.

To stop the spread of coronavirus (COVID-19), you should avoid close contact with anyone you do not live with – this is called social distancing.

“You should follow the guidance on how to stop the spread of coronavirus at all times, including if you have been vaccinated against COVID-19,” advises the Government.

A key part of this is wearing a face covering in many indoor settings, such as shops and places of worship, and on public transport, unless you are exempt or have a reasonable excuse, it says. 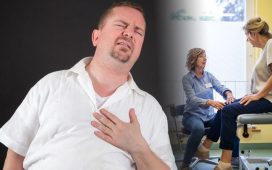