Over in South Korea, the Kospi rose 0.23% as chipmaker SK Hynix’s shares advanced.

The ASX 200 in Australia also added 0.5% as majority of the sectors traded up.

Australia’s economy grew less than expected in the first quarter, according to data on Wednesday. Gross domestic product grew 0.4% in the first three months ended March, slightly lower than a 0.5% increase that economists polled by Reuters predicted. The data came a day after the Reserve Bank of Australia cut its cash rate to a record low.

One strategist said it was “difficult to see it getting much better anytime soon.”

“I think what today’s report does do is it suggests that the RBA is probably going to have to cut its forecasts yet further,” Robert Rennie, global head of market strategy at Westpac Bank, told CNBC’s “Street Signs” on Wednesday. “And we’re expecting a further two times 25 basis point rate cut from … the RBA. One in August, one in November, and that’s probably something that should continue to undermine the Australian dollar as we move through to the end of this year.”

The moves stateside came after U.S. Federal Reserve Chairman Jerome Powell signaled that the central bank was open to easing monetary policy to support the economy.

He said the central bank will “act as appropriate to sustain the expansion.” He noted, however, the Fed does not know “how or when” global trade issues will be resolved. “We are closely monitoring the implications of these developments for the U.S. economic outlook,” he added.

“I think chairman Powell has given a message to markets that is indicating that a rate cut is coming. This is in essence a very strong signal that the (Federal Open Market Committee) is ready to actually talk about cutting rates,” Sarah Bloom Raskin, a former governor at the Federal Reserve, told CNBC’s “Squawk Box” on Wednesday.

The U.S. dollar index, which tracks the greenback against a basket of its peers, was at 97.058 after climbing above 97.2 on Tuesday.

Investors also cheered comments made by the Chinese Commerce Ministry, which said in a post that the “differences and frictions between the two sides” should dealt with through talks, according to a Google translation. Market watchers took those remarks as a sign of possible easing of trade tensions between Beijing and Washington after each country hiked tariffs on billions of dollars worth of each other’s goods in May.

But, the post also said talks “need to be based on mutual respect, equality and mutual benefit.”

On the U.S.-Mexico trade front, Mexican Foreign Minister Marcelo Ebrard said Tuesday he expects both countries to find common ground on immigration and trade, despite U.S. President Donald Trump threatening to slap tariffs on all imports coming from Mexico. For their part, Republican lawmakers have indicated their opposition to the tariffs on Mexican goods. They have also hinted at blocking those levies if the president moves forward with them.

The Japanese yen traded at 108.07 against the dollar after touching levels around 107.9 in the previous session.

Oil prices declined in the afternoon of Asian trading hours, with international benchmark Brent crude futures slipping 0.48% to $61.67 per barrel, while U.S. crude futures fell 0.75% to $53.08 per barrel.

— Reuters and CNBC’s Fred Imbert contributed to this report.

No to America: Thousands take to the streets to protest against US troops in Iraq 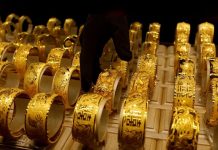 Wuhan virus: 8 Chinese nationals who were in 'close contact' with Singapore's first case …