GDP may be impacted by shutdowns and reopening

A couple of themes present themselves in the coming week, namely GDP and production. In terms of GDP, the first relevant data point is the contribution to third quarter GDP from net trade in Australia, which comes out a day ahead of the Australian 3Q GDP figure. India also releases 3Q GDP data on the 30th and like Australia, its GDP report will be heavily affected by Covid and the timing of lockdowns and reopening. Base effects drop out sharply from India’s 3Q21 annual comparison, which will bring the year-on-year growth rate down, but this is partially offset by a strong bounce back from the Delta wave which ravaged India’s economy in 2Q21. What this does is pitch two huge and offsetting swing factors against each other, and the scope for forecasting errors is huge. Not only that, but interpreting what any forecasting “miss” actually means for India will be problematic. Australia’s GDP release faces almost exactly the opposite issues. 3Q21 marked a period of widespread lockdown in Australia, and there will undoubtedly be a significant hit to economic activity – just how large is a matter of guesswork though, and with a strong bounce likely in 4Q21, markets may be inclined to ignore any forecasting data surprises here.

As well as GDP, two of North Asia’s big exporters, Japan and South Korea will release production data for October. Base effects from the big output contractions in 2020 have fully worked through the data, so what we are seeing now is more representative of the trend growth rate of production in both countries. The short story is that production growth isn’t very impressive in either economy. Both Japan and Korea registered small declines in annual output growth in September. However, this is volatile data and it would probably be fairer to describe growth as approximately flat at present.

We also get production numbers out from China with official manufacturing PMI for November expected to edge up from October and move from contraction to expansion on a monthly basis. The increase likely came about after electricity outages were solved by November compared to several days of sudden outage in October. Despite the projected improvement, manufacturing activity should be at a subdued level as export orders slow towards the close of the year and as construction activity faces delays given the sudden cold weather. Meanwhile, the non-manufacturing PMI should fall from October, having enjoyed a temporary boost due to the extended holiday. We expect a slight dip for services although the PMI should remain in expansion due to increased financial activity in November.

The rest of the field

Meanwhile, South Korea reports November inflation data at the end of next week. The report comes a week after the Bank of Korea rate setting meeting so the relevance will be more in terms of vindication of the BoK’s rate hike. Inflation could also provide clues about the extent to which the BoK will have to tighten in 2022. Indonesia also reports inflation next week although price pressures remain subdued due to relatively soft domestic activity. Soft inflation in Indonesia has allowed Bank Indonesia to retain its pro-growth stance in the near term to help support the economic recovery.

India also releases some fiscal deficit figures for October on 30 November. Progress on deficit reduction and meeting budget targets will be important for India if it is to avoid ratings downgrades next year. India is currently right at the cusp of investment grade, and Fitch has the country on negative outlook. So these numbers will become increasingly important over the coming months. 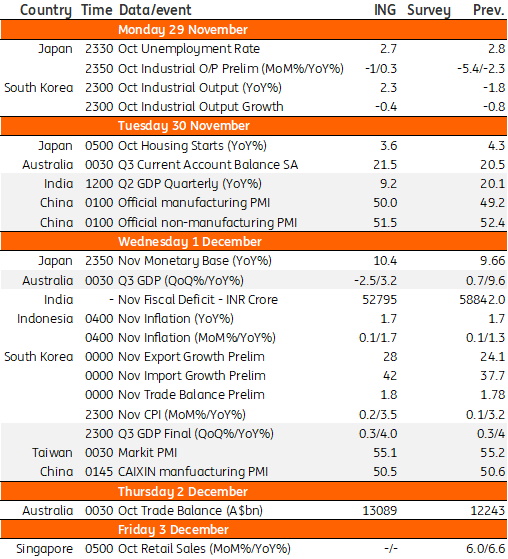