HONG KONG: Asia stocks were mostly lower on Tuesday, tracking a retreat on Wall Street after President Joe Biden picked Federal Reserve Chair Jerome Powell to lead the central bank for a second term, reinforcing expectations the U.S. will taper its stimulus soon.
MSCI’s gauge of Asia Pacific stocks outside Japan fell 0.49%, while Hong Kong’s Hang Seng Index and China’s benchmark CSI300 Index opened 1.1% and 0.2% lower, respectively.
Australia’s S&P/ASX 200 outperformed with a 0.55% gain, boosted by miners and energy stocks. Japanese markets were closed for a public holiday.
Riskier assets have been shaken up again over recent sessions amid surging COVID-19 cases in Europe and renewed curbs, dousing investor hopes of a quicker recovery in consumption and growth worldwide.
Germany’s outgoing Chancellor Merkel said the latest surge is the worst experienced by the country so far, while Austria went into a fresh lockdown on Monday.
Overnight on Wall Street, the S&P 500 and Nasdaq Composite retreated from all-time highs after President Biden tapped Powell to continue as Fed chair, and Lael Brainard, the other top candidate for the job, as vice chair.
“The USD looks poised to hold onto its gains post-Powell renomination as it leaves room for markets to flirt with the idea of a faster taper,” said analysts at TD Securities in a note.
ANZ bank analysts concurred, saying in a note to clients that the Powell news stoked “expectations that tapering will accelerate and rates will begin to lift from June 2022.”
The US rates chatter kept the dollar index well supported near a 16-month peak. The greenback was also near a 4-1/2-year top versus the yen in early deals on Tuesday.
Powell’s current term, which has seen an emphasis on creating jobs from the prominent focus on inflation, has proven positive for risk assets, with the S&P gaining 69.7% since his appointment.
US Treasury yields were led higher by two-year notes, which typically moves in step with interest rate expectations. It hit its highest level since early March 2020.
In commodities, spot gold rose 0.19% to $1,808.4 per ounce at 0226GMT, paring Monday’s losses. Gold prices were under pressure as Powell’s nomination drove expectations that the central bank will stay the course on tapering economic support.
Oil prices were in the red again after a short rebound the previous day from recent losses on reports that OPEC+ could adjust plans to raise oil production if large consuming countries release crude from their reserves or if the coronavirus pandemic dampens demand.
Brent crude was down 0.21% at $79.53 a barrel and US crude dropped 0.5% to $76.38 per barrel by 0226GMT.
The US Department of Energy is expected to announce a loan of oil from the Strategic Petroleum Reserve on Tuesday in coordination with other countries, Reuters reported earlier. 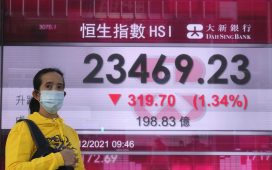