ASIA/MIDDLE EAST – The Middle East Council of Churches invites to join in the consecration of the region to the Holy Family: our land “attracts” wars, let’s ask the Savior for help 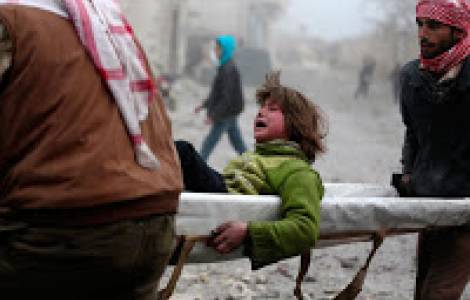 Beirut (Agenzia Fides) – The Middle East has become an optimal geopolitical space to unleash “wars by proxy” that turn into a sort of “rotating slaughter” for local populations, victims of conflicts “that end in one place to ignite in another”in the Middle East region. An uninterrupted flow of pain, mourning and misery fueled by the same model of modern development, with its insatiable need to foment new conflicts to keep the performance of the arms industry high that fosters technological globalization. Faced with these scenarios, the most realistic option is to “turn to the Savior”, recognizing that “only the mercy of God, the Creator, can save us”. This is the view and judgment on Middle Eastern events that prompted the Middle East Council of Churches (MCCC) to launch an appeal to invite all the inhabitants of the region, Christians and non-Christians, to join the initiative promoted by the Catholic Churches present in the area, which tomorrow, Sunday, June 27, will celebrate the first day of peace for the East and will consecrate the Middle East to the Holy Family of Nazareth (see Fides, 25/6/2021).

Greek Orthodox Christian Michel Abs, current Secretary General of the MECC, takes his cue from the unprecedented initiative of the Catholic Churches of the Middle East to propose a severe and realistic analysis of the real roots of the conflicts that for decades have torn that part of the world apart, sowing relentlessly death and destruction among defenseless populations. “War – the economist Abs points out – is dear to modern society, the society of industry, the society of ‘Had it not been for the destruction, you would not have lived in production’: that is, we destroy your society then we rebuild it and bill you, national debt, incomplete sovereignty, dependency and even slavery”. Technological society – urges the General Secretary of the MECC “lives only on war”, but the wise one is in the one who profits from the lesson to be learned and waves war away from his own society turning it into senseless and divided societies. Such a one entrusts others to wage his wars by proxy and to operate his weapons and ammunitions factories, in addition to the factories of products that the war has destroyed, ranging from infrastructure equipment down to home furniture”. Wars continues Michel Abs “are taking place today through intermediates”, and those who need this state of continuous war do not hesitate to destabilize countries even by inventing “accusations of nuclear or chemical production for it to invade it, destroy its stability, and then apologize to its people and to a million or more victims”. In the Middle East – insists the message of the Secretary of the MECC – “wars end in one place to ignite in another” in what is defined as “rotating slaughter”. And this happens because “our geographical location makes us an attractive place for wars, and so are our resources”.

Because we have been subjected to frequent destabilization, catastrophes, and disasters, often fictitious – notes Michel Abs in the final part of his speech – we have become convinced “that only the mercy of God, the Creator, can save us. We are no longer able to curb or control, so we must turn to the Savior”, because “man-made solutions have been exhausted”. (GV) (Agenzia Fides, 26/6/2021)