England’s hopes of regaining the Ashes look all but over after they were bowled out for 67 by Australia on the second day of the third Test day at Headingley.

The home side were skittled for their lowest Ashes total since 1948 before the tourists moved to 171-6 to lead by 283 at the end of a day when 16 wickets fell.

It amounted to one of England’s most dismal home Ashes days in recent memory, where they went from genuine optimism over levelling the series to the brink of being 2-0 down with two Tests to play.

Their reply to Australia’s first-innings to 179 was simply awful. Yes, the visitors’ bowling was magnificent, but flimsy England were blown away in ideal batting conditions.

Pace bowler Josh Hazlewood took 5-30, while Joe Denly was the only batsman to reach double figures – his 12 is the lowest to top-score in an England Test innings.

There was a glimmer of hope for England when Australia were reduced to 52-3 in their second innings, only for Marnus Labuschagne to take it away with his unbeaten 53 off 139 balls.

He was dropped twice and caught behind off a no-ball, each miss adding further frustration to England’s desperately disappointing day.

At some point on Saturday or Sunday, Ashes holders Australia look likely to secure at least a series draw, which is all they need to take the urn back down under.

England were hammered by 251 runs in the first Test, but seemed to have reversed the momentum by having the better of the drawn second match at Lord’s, not least because of the introduction of the pace of Jofra Archer.

It was Archer who bowled Australia out on Thursday with 6-45, giving England a golden opportunity to bat themselves into a dominant position in the Friday sunshine.

That they fell in such a pathetic heap was not only the latest in a long line of batting disappointments, but also effectively ended what was shaping up to be a tremendous battle for the Ashes.

Instead of being level with two to play, England’s best hope is to draw the series and end a winless run against Australia which is almost certain to move to nine matches.

As they do, they will have to consider how they use Archer, who hobbled off the field with cramp without being able to complete his 70th over in the space of nine days.

It was a sad contrast to the end of the first day, when he was cheered from the ground. It perfectly mirrored the change in mood – from euphoria on Thursday, Headingley was a picture of deflated dejection on Friday.

Yet another England collapse

Even if England supporters are used to seeing the batting fail – this was the third time this year they have been bowled out for less than 100 – this was a particularly inept display.

Whereas Australia were skittled in perfect bowling conditions on Thursday, England were unable to deal with a hint of movement because of weak defence, a lack of patience and loose strokes.

Four were caught driving – Denly, Jason Roy, Jos Buttler and Ben Stokes, to one he could barely reach. Three others perished to short balls.

Only captain Joe Root can count himself unfortunate to have edged a lovely delivery from Hazlewood, but that does not change the fact that the captain has registered successive ducks and been dismissed twice in three balls.

England’s miserable day was compounded in the field. Root dropped Labuschagne on 14 off the wholehearted Stokes, who was found to have overstepped during a review that would have seen the same batsman given caught behind and then had the right-hander put down by wicketkeeper Jonny Bairstow on 42.

Stokes and Stuart Broad did remove Matthew Wade and Tim Paine respectively in consecutive overs late in the day, strikes that surely came too late to impact the result.

England’s meekness was matched by the ruthlessness of Australia. The tourists were incisive with the ball, took sharp catches and had clever plans for each batsman. In the evening, they took advantage of their good fortune to move practically out of sight.

Pace bowler Hazlewood was excellent. His mode of attack was to hammer a length on and around off stump, examining England’s batsmen with slight seam movement. James Pattinson did the same.

Pat Cummins was the aggressor, bowling with hostility to bounce out all of Rory Burns, Chris Woakes and Archer.

Although Australia’s own top order wobbled, they were steadied by Labuschagne, who made his third successive half-century and added 66 for the fifth wicket with Wade.

Admittedly, Labuschagne had luck, but he still demonstrated all of the virtues of Test batsmanship that seem beyond many of the England side. 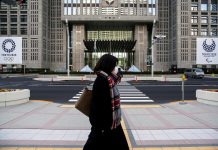 Exclusive: Tokyo has no 'Plan B' for Games despite coronavirus