Arsenal are finally flexing their muscles over Dusan Vlahovic – just in time for a tug of war for Ivan Perisic.

The Gunners have reportedly offered £50million plus Lucas Torreira for Fiorentina striker Vlahovic.

Arsenal’s hopes of landing the Serb ace have see-sawed due to his £58m-plus valuation and Juventus’ interest.

Uruguayan midfielder Torreira is currently on loan at Fiorentina, who have already indicated they might want to keep him.

Inter Milan utility man Perisic is said to be interesting the Gunners, as well as Chelsea and Tottenham

It’s thought the Italian giants might be tempted to sell the 32-year-old Croat in this transfer window rather than let him leave for free in the summer.

And Leicester boss Brendan Rodgers has admitted star man – and Arsenal target – Youri Tielmans has to ‘look at all options’.

Finally, as the fall-out fades from yesterday’s postponed Prem clash at Spurs, the Gunners are building up to Thursday’s Carabao Cup semi-final at home to Liverpool – following last week’s 0-0 first leg. 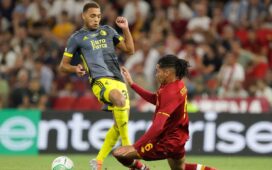