Stan Kroenke faces a law settlement of $790m after the Arsenal owner relocated his NFL franchise from St Louis to Los Angeles back in 2016, which caused a stir in Missouri 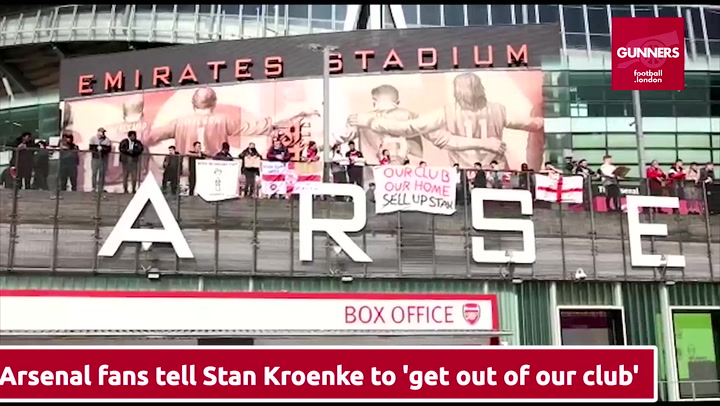 Arsenal Fans Tell Stan Kroenke To ‘Get Out Of Our Club’

Arsenal owner Stan Kroenke will have to pay a settlement of $790m (£592m) to the city of St Louis following the relocation of his NFL franchise, according to reports.

The Rams, who had played in Missouri for 20 years, made the move to Los Angeles back in 2016.

Kroenke owns a host of sports teams in America, but has been hit hard in the pocket following this decision.

It is not yet clear how much of the mammoth fee will be paid out of the 74-year-old’s own pocket, according to the St. Louis Post-Dispatch.

The lawsuit was filed against Kroenke, the Rams and the NFL in 2017 after the franchise moved to Los Angeles, which St Louis claimed had breached their agreement.

The Arsenal owner was always poised to pay tens of millions following the relocation.

No expansion team for St. Louis is included in the settlement, which was something the city were seeking.

The Rams relocated back to Los Angeles after receiving approval from 30 of 32 NFL owners but Kroenke had to pay a $550m (£412m) fee to move the team.

Since moving to California the franchise have built a state-of-the-art facility whilst on the field they reached the Super Bowl back in 2019.

They were edged out by the New England Patriots on the occasion. Last season they lost in the Divisional Playoff game against the Green Bay Packers.

This year they have a 7-3 record, which leaves them second in the NFC West.

Back in 2016 Kroenke was quizzed on his motives behind moving to Los Angeles and said: “We’re in the sports business, you know, a number of places. London, Denver, [Los Angeles]. So, we’re also real estate developers.

“There are just so many factors that you look at, but Los Angeles is a huge market.

“The National Football League is, you know, the most successful sports league in America by many metrics and it had no team.

“And so for a guy like me it’s pretty obvious, right? The league wants a team here.”

Kroenke has faced calls from Arsenal fans to sell up in north London, especially after the failed Super League debacle, which only served to further the gulf between supporters and the owners.

Kroenke’s son, Josh, takes on a leading role at the Emirates and made it clear recently that the Gunners were not up for sale.

He told Sky Sports : “We get bids for the club all the time, from many different parties around the world and that speaks to the strength of the Arsenal.

“It’s a wonderful institution, Arsenal Football Club is a global brand and my only response to anything is the club is not for sale, we’re just getting started.”