The Bundesliga champions looked to have claimed a point after Robert Lewandowski cancelled out an own goal from Louis Poznanski.

But sub Nketiah secured all three for the Gunners in their opening International Champions Cup opener at the death.

The North London side began their pre-season campaign with a 3-0 triumph over Colorado Rapids on Tuesday.

However, Unai Emery opted for a completely different starting XI to take on the German giants.

Mesut Ozil, Pierre-Emerick Aubameyang, Alexandre Lacazette and Henrikh Mkhitaryan were all named in attack as the Spaniard opted for a more experienced line-up at Dignity Health Sports Park.

And wearing their new “bruised banana” yellow away kit, Arsenal looked sharp from the off as they pressed Bayern.

Aubameyang almost forced opposition goalkeeper Manuel Neuer into an error when the stopper attempted to dribble past the striker on the edge of his six yard box, but fortunately for him he managed to smother the danger before the hotshot could finish.

Down the other end, Gunners ‘keeper Bernd Leno twice denied Bayern with impressive saves from Thomas Muller and Daniels Ontuzans.

However, it was Arsenal who had the best chance of the goalless first half when Aubameyang raced from the edge of his own area to set-up Mesut Ozil – but the newly-blonde winger could only drive his effort straight at Neuer.

Bayern manager Niko Kovac changed his entire team at the break – and just moments after the restart one of his substitutes made the breakthrough.

Unfortunately for him 18-year-old Louis Poznanski turned the ball into his own net when attempting to clear a Aubameyang cross. 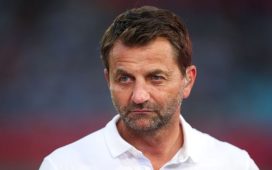 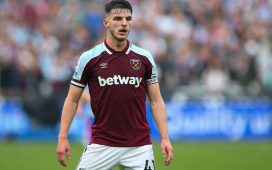