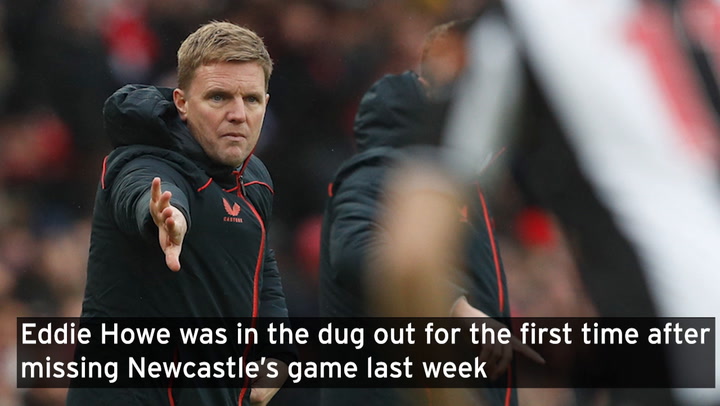 Eddie Howe took charge of his first Newcastle United game on Saturday lunchtime, but couldn’t oversee a change in fortunes for the Premier League’s bottom club.

The Magpies manager missed the 3-3 draw with Brentford after a positive Covid test, but returned to watch his team

Pierre-Emerick Aubameyang ‘s horror miss was the main story of the first half, with Arsenal seeing plenty of the ball but predominantly being restricted to shots from outside the area.

It didn’t take the Gunners long to go ahead after the break, though. Bukayo Saka collected a tidy Nuno Tavares pass to beat Martin Dubravka and break the deadlock, and Gabriel Martinelli doubled the lead just 93 seconds after replacing Saka from the bench.

Here are the main talking points from the game, which saw Arsenal move level on points with fourth-place West Ham United while keeping Newcastle rooted to the foot of the table.

1. Howe with work to do after first game in dugout

Can Eddie Howe keep Newcastle in the Premier League? Have your say in the comments section

Howe was making his dugout debut for Newcastle
(

In the lead-up to the game, pundit Martin Keown said Newcastle “have to get points on the board” in the coming weeks, and their ability to do that will begin with the new manager.

There will be investment to come, but before that the manager has to work with the current squad any earn points with a team which has found things very tough this term.

Newcastle immediately looked more organised than at times earlier in the campaign, but their shortcomings came to the fore in the second half.

When Pierre-Emerick Aubameyang’s poor control cost Arsenal an early opener against Watford earlier this month, he must have thought that would be the low point of his season.

However, he went one worse against Newcastle, inexplicably finding the outside of the post when stood in front of a gaping goal.

The Gabonese forward looked like he had his mojo back with six goals in his first nine games this season, but this was a fourth game without a goal for the Gunners captain.

Aubameyang couldn’t quite believe he missed the target
(

After Nuno Tavares’ error gifted Liverpool their second goal at Anfield last weekend, some might have wondered whether Kieran Tierney would be recalled at left-back.

Ryan Fraser put the young Portuguese defender to the test a few times during the first half, and he dealt reasonably well with the threat of the Scot, but Tavares’ attacking output felt wasteful at times with a wayward long-range shot one of the more notable examples.

What did you make of Arsenal’s performance against Newcastle? Rate the players below

Arteta’s selection will have felt vindicated early in the second half, though, with the defender drawing a foul from Emil Krafth which saw the Swede booked and then taking advantage of the extra space going forward to deliver a smart assist for Bukayo Saka’s opener.

However, it will be interesting to see whether the youngster keeps his place for the midweek meeting with Manchester United, where the Gunners can expect their defence to face a bigger test.

Dubravka kept Newcastle on terms with a couple of big saves
(

While Newcastle are expected to invest in new signings when the January transfer window, a number of players will be attempting to prove they have the quality to continue playing a part.

Martin Dubravka hadn’t been given that opportunity this season, having begun the campaign sidelined through injury and failing to recover his place from Karl Darlow before today.

After a quiet opening 15 minutes, the Slovakian international produced a confidence-boosting stop to keep out Martin Odegaard’s free-kick and an even better reflex save to deny Emile Smith Rowe.

The man at the other end, Aaron Ramsdale, made sure to make himself undroppable after coming into the starting line-up and once again showed his quality with a fingertip stop to deny Jonjo Shelvey. Has Dubravka made as immediate an impact?

Willock had a quiet afternoon against his former club
(

When Arsenal let Joe Willock join Newcastle on a permanent deal, there was dissent from some fans who wanted the academy product to be given a chance to replicate his Magpies form in north London.

The midfielder went on an important scoring run to keep Steve Bruce’s team in the Premier League last season, but has found things much tougher since his £25m summer switch.

A late shot which caused Ramsdale few problems was the closest the 22-year-old came to making an impact, and he’ll be as disappointed as anyone.